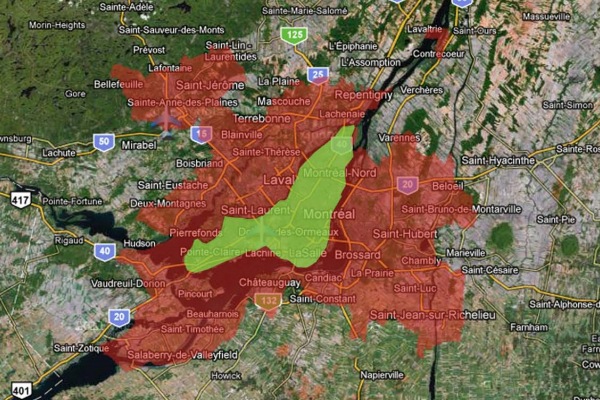 Colba.Net's proposed IPTV service area in greater Montreal - the green zone has already been approved by the CRTC

It’s also looking to setup service in Granby, Sherbrooke/Magog, Sorel/Tracy, Joliette, Trois-Rivières, and the greater Quebec City/Lévis area. You can see maps of those proposed service areas on its website.

In a separate application, Colba.Net is also looking to introduce IPTV to the National Capital Region (Ottawa/Gatineau) and cities in Ontario, including:

Colba.Net launched its IPTV service in Montreal in December, after having received CRTC approval for a network covering the island in October 2010. But it’s still in its infancy. It’s only available downtown, on the Plateau and in Westmount, and it offers only 28 channels, four of which are in HD. Even popular cable channels like CBC News Network, LCN, Discovery Channel and Space are listed as “available soon”.

But the proposed programming grid for Quebec lists just about every cable channel any Canadian could have access to. It’s essentially the same as Bell’s Fibe TV service, including Bell’s community channel, Bell video on demand and Bell pay-per-view. The grid for Ontario is similar. Both would notably take their U.S. network stations from Detroit (and Rochester, N.Y., for Fox) instead of Montreal’s usual Burlington/Plattsburgh.

The technology used is similar to Bell’s Fibe service, and will use ADSL2+ and VDSL2 to squeeze voice, Internet and television data through twisted-pair phone line.

According to the CRTC application, the IPTV service would cost $24.95 per month for base service (which would include mandatory channels, U.S. networks and a few non-mandatory channels like MuchMusic, CMT, YTV and CTV News Channel), plus a $75 installation fee. The service currently costs $34.95 a month, but when bundled with voice and Internet that comes down to $19.95 a month. Service also requires a special router at $109.95 and a set-top box for $149.95.

The application doesn’t specify how many channels would be available in high definition.

Plenty of Montrealers like to use third-party resellers for Internet and phone service, but the lack of alternatives to Bell, Videotron and Shaw when it comes to TV service is a major deterrent to switching. If Colba.Net can offer a competitive television service with as many channels available (including high-definition channels) for a reasonable price, that might be enough to get many people upset with the big players’ prices or poor customer service to switch over.

UPDATE (April 15): Colba.Net has applied yet again to expand its IPTV service, to major cities in every province but Prince Edward Island. Applications can be consulted here:

8 thoughts on “Colba.Net applies to expand IPTV to major cities in Quebec and Ontario”