When I was working on my story about Global Montreal, my editor suggested I write a companion story about the ratings for local newscasts, since it had been a while since The Gazette looked into that. (The last time was a year ago, when CFCF celebrated its 50th anniversary.)

I asked for basic ratings information from the three broadcasters, wanting to know what their estimated total average audience was for each of their local programs. BBM Canada, which does ratings measurements, doesn’t like too much detail about demographics being released, so I limited myself to asking for the total 2+ audience.

In the case of Shaw Media, that limitation wasn’t enough, and they wouldn’t give me their exact ratings for CKMI’s Evening News, News Final and Focus Montreal, saying they couldn’t because of their deal with BBM. Fortunately, I was able to get some ballpark figures by looking at the detailed master planners that Shaw Media provides to advertisers, which breaks down by station, by time slot and by demographics. Shaw warned me that these are just “estimates”, but they’re the best I could get, and the numbers were similar to what was reported last year.

CFCF and CBMT had no trouble providing me with their audience numbers (though in the case of CBC Montreal there was apparently some confusion over whether it was numbers for the Montreal market or total, which led to a correction on the story.) 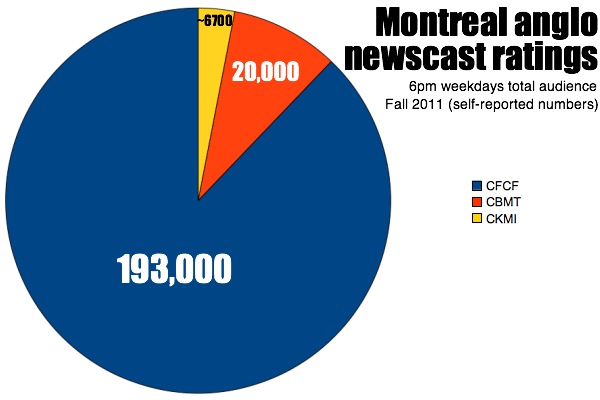 The numbers for the weekday 6pm newscasts are unsurprising, and haven’t changed much. CFCF dominates with almost 200,000 viewers on average. CBMT is next with its newscast peaking at 34,000 during the 5:30pm block (which is ironically when it presents national and international news), and CKMI has numbers in the four digits, somewhere around 7,000 viewers.

It’s pretty well the same story as last year, and just about the same story as a decade ago, except that in 2000, when Global Montreal was still new and still making significant investments in local programming, the number of people watching its local news was about three times what it is now, and it was in second place ahead of the struggling CBC, which had only two years previously had an audience as high as 60,000, and was above 80,000 in the early 1990s.

We have decades of numbers showing that CBC isn’t going to beat CFCF at 6pm, and 15 years of numbers that show Global trying every trick in the book isn’t going to help it succeed at that goal either. CFCF’s newscasts have more resources, more staff, more experience, and much more loyal viewers.

Assuming that the other stations want to maximize viewership for their local newscasts (and there’s certainly an argument to be made that Global is doing the absolute bare minimum when it comes to CKMI – even their upcoming morning show is being done because of a CRTC commitment), what can they do?

Throwing money at the problem is one solution, though people who remember the best years of CBC’s NewsWatch would note that they still weren’t able to create serious competition for CFCF in the 1990s.

Another option is to move the newscasts out of the way and hand the 6pm hour over to CTV. In 2009, CBC made a big move expanding its local evening newscasts to 90 minutes and having them start at 5pm. CBMT is seeing strong ratings gains for that hour, and is seeing more viewers from 5-6pm than from 6-6:30pm.

On the French side, the reanimated corpse of TQS known as V based much of its programming schedule on counter-programming, putting entertainment programming in the 6pm and 10pm hours when Radio-Canada and TVA have newscasts. The idea has worked for one of V’s biggest successes, Un Souper presque parfait at 6:30pm.

Of course, this has been tried before. Global Montreal tried starting local news at 5:30 twice, the last time in 2000. That lasted two years until they went to the half-hour news at 6pm that they do now. CBMT also tried starting at 5:30pm in the 90s, but didn’t have much success.

But I think it’s time to try again. V’s successes and CBC’s stronger ratings in its 5pm hour show that counterprogramming is a strategy that can work for an underdog. And the number of people working 9-to-5 jobs that get home just before 6pm isn’t the same as it used to be. Many people are working earlier and later.

I’m not a big fan of CBMT’s repetitive 90-minute newscast, though I can understand the strategy of letting people tune in for one half-hour block of their choice. I think CBC should just get rid of the last half-hour, move to a one-hour newscast with less repetition and more original local news, and use that other half-hour daily to produce some other form of local programming. A current-affairs show or local culture show would be, I think, dearly welcome in this market, and something that would fit well with CBC’s mandate. Putting such a show at 7pm, when CTV and Global air vacuous celebrity gossip shows, would be brilliant counterprogramming and give people like me a reason to watch television at that hour.

Unfortunately for CBMT, decisions like this are made almost entirely at the national level. It was a national decision to have a 90-minute newscast that starts at 5pm, and a 10-minute late newscast after The National. For such a change to happen, it would either need to be made nationally (ignoring the variations in each market) or would require a decentralization of decision-making that we haven’t seen in a long while.

As for Global, when I met with station manager Karen Macdonald, I asked why they hadn’t considered moving the newscast out of CTV’s shadow. She pointed out that they have tried that in the past, but also said they didn’t try it for long. She said they might consider it again, but that if it would move it would probably go to 5:30.

I think 7pm is a better bet. The competition – CTV’s awful eTalk and the second half of Coronation Street on CBC – is weak, they wouldn’t be up against any other local news, and I think more and more Montrealers are working later shifts or having longer commutes and are more likely to miss the 6pm news at CFCF.

But Entertainment Tonight and ET Canada are big ratings draws for Global. And replacing ET Canada with local news at 7pm would be a sign of serious commitment to local programming that I don’t think Global is prepared to sacrifice ratings for.

While a lot of attention is paid to 6pm weekdays, I was curious what the other newscasts during the week get in terms of audience. Those numbers are rarely reported.

CTV’s ratings show that the late-night newscast at 11:30pm gets 57,000 viewers on weekdays and 55,000 on weekends – so those tuning in to Tarah Schwartz on Saturday nights is about the same as those tuned in to Catherine Sherriffs on Monday nights.

It’s worth noting that these numbers are higher than CBMT’s at 5pm. So when Debra Arbec left her job as late-night anchor to jump to CBC, she saw her average viewership drop. But that’s compensated by being a bigger fish in the smaller pond, being one of the faces of her station, and having more airtime in a day (with SportsNight taking up much of CFCF’s late newscast, anchor screen time is very limited).

At noon, CFCF draws 50,000 viewers, which is pretty impressive for a time when most people are at work or doing important things.

And on the weekends, Tarah Schwartz gets 119,000 viewers on average at 6pm. (She’s supposed to be getting a co-anchor at some point, but one hasn’t been announced yet.)

The other late-night newscasts have pretty poor ratings. About 14,000 viewers for the 10-minute block of CBC sandwiched between The National and George Stroumboulopoulos. Global’s ratings at 11pm are in the low four-digits, around 2,000 viewers (though that’s a seven-day average, and also includes the 11:30 slot).

Compare that to more than 80,000 Montrealers tuning in to CTV National News, and there really isn’t much competition here either.

I always found CBC’s late local news a bit awkwardly-scheduled, more as a continuation of The National than a standalone program. That’s great if you want a lead-in from Peter Mansbridge, but CBMT isn’t going to attract viewers who tune in to American dramas at 10pm. By the time the credits start rolling on those shows, the CBC late newscast is almost half done.

I’m curious what my loyal readers think of newscast scheduling. Would moving weeknight local news be a good idea for CBC and Global? Would you be more likely to watch if they were on at some other time? What should the other guys do to set themselves apart from CFCF? And what other kinds of local programming would you like to see in English Montreal?

17 thoughts on “Should CBC and Global move their local newscasts?”