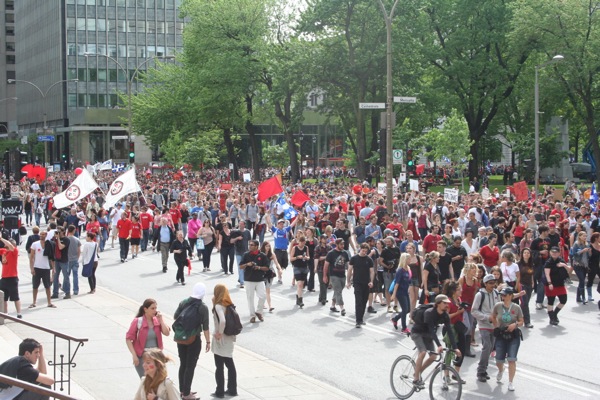 A small sliver of the protest that marched down René Lévesque Blvd. on Tuesday, May 22

It’s the most important question to answer when covering a large protest, and yet it seems nobody can answer it: How many people were there?

It happened again on Tuesday as what was billed as a huge manifestation of the public against the Quebec Liberal government turned out to be exactly that. Protesters filled the streets of downtown Montreal, blocking traffic for hours. The police, which has been pretty good at reporting where protests are via its Twitter account, stopped doing it because the protesters were everywhere.

But how many protesters were there, exactly? Could someone just provide an estimate?

Once upon a time, the police did just that. Journalists would ask them for their guess of the crowd size, and report that as if it was gospel. It didn’t matter how the police came to that figure. The story would simply say that police estimated the size.

So Montreal police now don’t release crowd estimates. Other police forces elsewhere in the world have done the same, for similar reasons.

Seeking a source – any source – to provide something to put in headlines, many journalists have little choice but to turn to the organizers themselves, who have very obvious motives for inflating their figures. Without any police estimates, there is nothing to challenge organizers’ figures until they reach the point of insanity (like, where the number of protesters exceeds the entire population).

It’s hard to overemphasize the importance of this number. The entire point of this protest is to get as many people in the streets as possible. A protest of 50,000 is impressive, but a protest of 500,000 is much more so. Even though there’s an order of magnitude between these numbers, crowd estimates crossed that entire range. Organizers and supporters, obviously, went on the higher end. Others, perhaps with other agendas, went lower.

I wasn’t at the first two, so I can’t really compare, but this one did seem huge. It just went on forever, and when you thought it was done, another wave would come. When the head of the march reached Lafontaine Park, the tail was still at Peel St.

But estimates of those earlier protests are just as flawed. The March 22 protest organizers estimated 200,000 people, and Le Devoir used that number in its front-page headline. La Presse had police sources estimating 100,000, and said it was probably between the two (La Presse later went back and asked for a more scientific estimate, coming up with 108,000, with a large margin for error – thanks Judith). The Earth Day protest organizers had estimated 250,000 (or 350,000, depending on who you ask). Le Devoir said 250,000, but La Presse said it was 150,000, based on police sources.

Even anonymously, police sources are only as good as their methods, and anonymous sources are probably not going to get into detail about them.

For this latest protest, most of the mainstream media threw out the idea of having actual numbers and just went with the vague “tens of thousands”. Theoretically that could mean 30,000 or 300,000 (at which point you’d have to say “hundreds of thousands”), with most people visualizing it around the lower end of that scale. That infuriates supporters of the student movement, who don’t hesitate to claim the media is biased against them, and hint at some conspiracy to hide the truth, when in fact the problem is that the journalists simply don’t know what the truth is.

Montreal isn’t the only place with this problem. Here’s a post about the wildly varying estimates of the size of a Glenn Beck rally a couple of years ago.

Crowd estimates are very difficult to do, as OpenFile’s Justin Giovannetti pointed out after the March 22 protest. Once it gets to the tens-of-thousands mark, it can’t be counted individually. Any scientific method requires getting a sample of a certain defined area and multiplying it by the entire area. But that’s easier said than done.

For this protest, since I had the day off and I wasn’t covering it, I decided I’d try to use some scientific method to analyze its size.

As the head of the march reached René-Lévesque Blvd. and Metcalfe St., I spotted some slightly higher ground at Mary Queen of the World Cathedral. I stood there and started counting.

I decided I would use, as my sample, the block from Metcalfe to Mansfield St. Google Maps tells me this is a distance of 110 metres, which I’ll round to 100 since I’m counting from the edges, not the middle, of the intersections. I tried, through various methods, to count how many people fill this area at one time. I tried counting in my head, using an electronic counter, and taking an even smaller sample. Each of these methods gave me a figure that put the crowd a bit less than 500. That’s 500 people, covering three lanes of traffic (for the most part, the march contained itself to the north half of the street) for 100 metres. That comes out to about 500 people per 1200 square metres, or 0.4 people per square metre, or 2.4 square metres per person. This is about the estimate used for dense crowds, and the crowd was quite dense (though still fluid), so I was confident here that I was on the right track.

Having a good estimate for the size of a block, the next step was to count the number of blocks. From 3:27pm to 5:03pm, I stood there as the march went by. I picked some recognizable marcher (usually one with a distinctive sign) at Metcalfe St., waited until that person reached Mansfield, and then repeated the process.

To compensate for varying crowd density, I counted one and a half blocks when the march spilled into the other half of the street, and two blocks when it filled all six lanes. I also stopped counting when there was a gap.

In the hour and a half I was there, I saw the main protest pass by. I saw a second march, seemingly filled with more radical elements who wore masks and carried black flags, cross it in the other direction (doubling my workload momentarily), then after it appeared to have died, a second wave of the first march appeared and filled the streets once again. Just as it ended, a fourth march descended Mansfield St. I quickly moved a block east so I could add them to my count.

When it was all over, I counted 97 blocks, give or take a few. That’s a long protest. About 10 kilometres. To give you an idea of perspective, 10km is the entire length of St. Laurent Blvd. So this protest could have taken up three densely-packed lanes of St. Laurent from Gouin to de la Commune. That’s crazy when you think about it that way.

But if you do the math, 500 people times 97 blocks is 48,500. How could this protest be only 50,000 people if it took up so much space? I posted the estimate on Twitter and asked people if there was a flaw in my methodology.

The biggest issue seemed to be location. There was, apparently, a march that took the original planned route going east along Sherbrooke St. toward Lafontaine Park. If that march didn’t pass my location, then it wouldn’t have been included in my count.

But that was it. Nobody questioned the 500 people per block estimate, or the 97-block length (a measure partly of its width, so not its actual length).

Let’s say that second march had the same amount of people in it, even though I’m inclined to think it was less than that. We’ll double the number to 100,000. Even that was insultingly low to some organizers and supporters, who said it must have easily been hundreds of thousands. I asked some what method they used to come up with their estimates. One responded “my eyes“. Many pointed to aerial shots.

The best aerial shots I’ve seen were from the Journal de Montréal, one of the few media to boldly make its own estimation (150,000). The photos, taken by Maxime Landry in the TVA helicopter, show the Place des Festivals filled with people, to the point where they spill over into adjacent streets.

I’ve seen this kind of crowd before. This is what it looks like during big Jazz Festival events. And because those events have controlled entrances (in some cases people counting participants with counters), we know that that kind of crowd (including spillover on nearby streets) is about 100,000.

That’s not to say that’s a definitive number. People were still arriving after the march began. Others may have joined in later. But it’s a good indication in terms of order of magnitude.

As much as people will criticize QMI for being biased against the students, I’m inclined to believe their estimate, or even consider it on the high scale. Based on my method of counting, and the fact that there was at least one large march I didn’t see (I believe), a figure of 100,000 seems about right.

Pictures are worth a hundred thousand protesters

That’s still a huge number. Even just counting those who passed by me on René-Lévesque, the protest took up more than 100,000 square metres and would fill the Olympic Stadium.

It’s large enough that it made the front page of every newspaper, and led every newscast (even The National led with two stories about it), and got noticed around the world. A hundred thousand is about 1/20th of the population of the island of Montreal. It’s about a fifth of the population of 15-to-35-year-olds on the island. It’s enough people that the government needs to take notice.

And the problem with pretending that it’s 500,000 people is that the next protest will have to be even larger than that. And at some point that ever-inflating number will be mathematically impossible and the numbers will lose all meaning, if they haven’t already.

UPDATE (Aug. 23): Radio-Canada has hired an outside company to measure the latest protest’s size. See more about that here.

See also: This story from Urbania, about a similar issue for a 2019 protest.