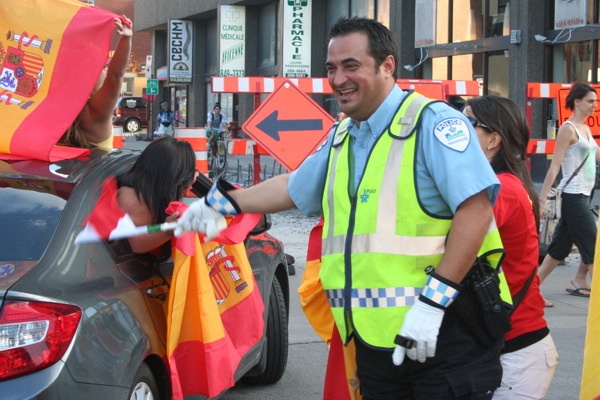 Last weekend, as thousands in Montreal were packing, moving and unpacking their belongings, and thousands more engaging in activities related to Canada Day, St. Laurent Blvd. was a sea of yellow and red Spanish flags, people honking and cheering after their national soccer team defeated Italy 4-0 in the final of the European championship, the second-most prestigious soccer event after the World Cup.

Combined, the two mean that every two years, people in Montreal (and elsewhere in the world) abandon the maple leaf and take up the flags of their ancestral homelands (whether or not they were born there, have ever been there or even speak the language) and, to varying degrees, follow and support that country in its quest for international glory. In some cases, couples find themselves at odds. (I noticed at least a few couples that supported each side of the Italy-Spain match.)

It goes without saying that most of these fans end up disappointed. Only one country can win it all. Then, like any true sports fan, they begin rationalizing that loss to dull the pain. (Italy wasn’t expected to win, it was down to 10 men, it put on a strong effort, etc.) But more importantly, no matter how fanatic about their chosen side, they know in the end it’s just a game, and they don’t take it too seriously. 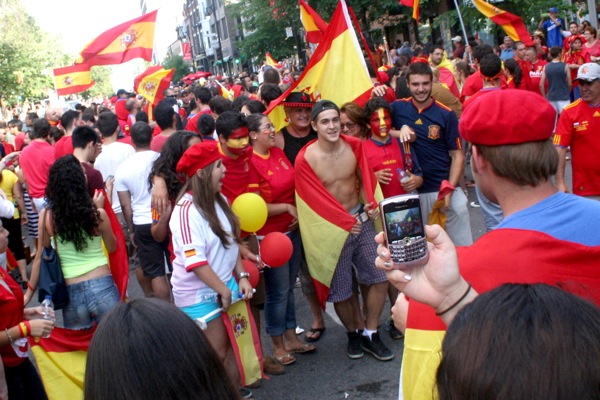 After a Canada Day picnic in Mount Royal Park, I was heading home when I noticed a large crowd had gathered at St. Laurent near Mont Royal Ave. It didn’t take long to realize it was hundreds of Spanish soccer fans celebrating their Euro win over Italy.

If you’ve seen one of these celebrations, you’ve seen them all. Cheering, chanting, jumping and dancing, mostly by young people wearing team jerseys and carrying flags. (I was surprised how many Spanish flags there were – is there now a shortage?) It’s chaotic, spontaneous, energizing fun. 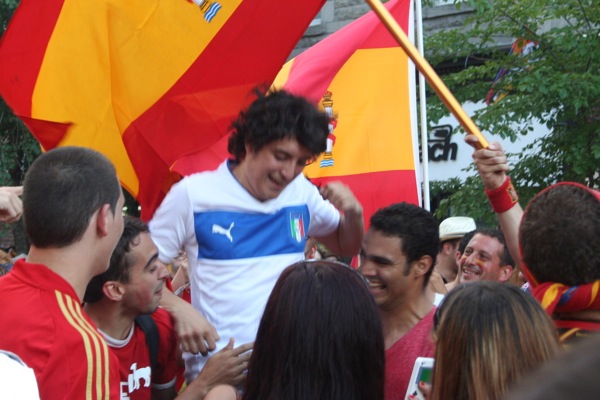 An Italian soccer fan is hoisted in the air by Spanish fans, shortly before he and a Spanish fan exchanged shirts.

At one point, I spotted an Italian fan being surrounded by the crowd. (I don’t know what he was doing there. Did he get lost on his way to Little Italy?) He was picked up by Spanish fans and held up in the air to cheers from the crowd.

They could have rubbed it in, or showered him in boos. But instead they took him in. He and his country had already suffered by looking at the scoreboard. There was little these people could do to make that worse. So instead they embraced him, let him join in their celebration. They revelled in his national shame, and so did he.

I’d seen this embracing of the enemy before. 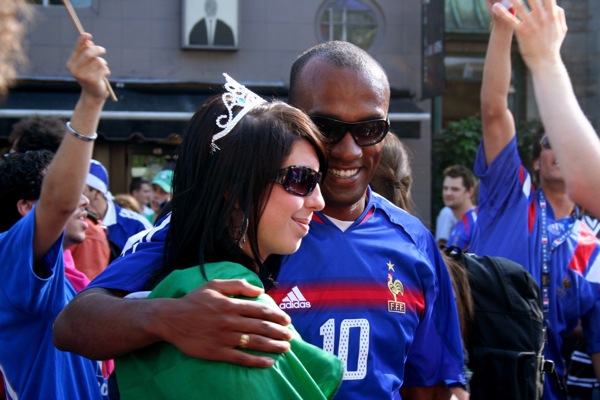 A France fan embraces a Portugal fan in postgame celebrations during the 2006 World Cup.

It was July 5, 2006, and France had defeated Portugal 1-0 in the semifinal of that year’s World Cup in Germany. Zinedine Zidane scored the only goal. (He would distinguish himself in the next game, when France lost the final to Italy on penalty kicks.) The French fans were gathered on St. Denis St. near Rachel St. to celebrate.

Some Portuguese fans, whose gathering place was at St. Laurent and Rachel, made their way down to St. Denis. There, they were treated like royalty. Or, at least like visiting dignitaries. Some good-natured boos, but lots of hugs. It could have been taunting sour grapes, but it was instead an outpouring of sympathy for a heartbreak they were a couple of goals from experiencing themselves (and, indeed, they would just four days later at the hands of the Italians). 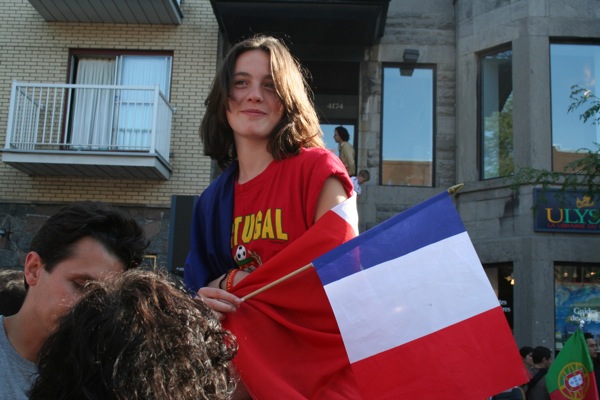 Many of the Portuguese fans left with the same heartbreak of seeing their national team lose, but smiles on their faces and maybe a few new friends among the bleu-blanc-rouge. 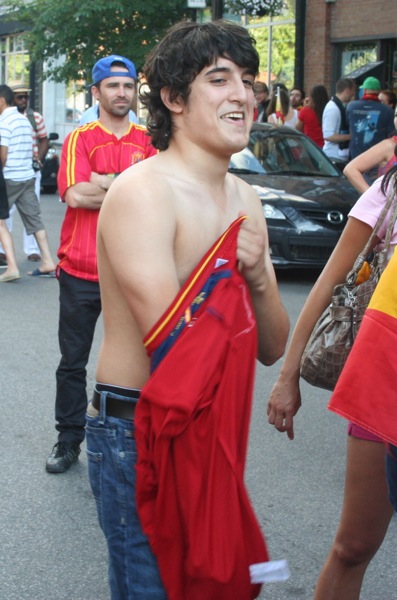 An Italian fan puts on a Spanish team jersey after switching shirts with a Spanish fan.

Back on St. Laurent in 2012, they went a bit further. The Italian fan and one of the Spanish fans exchanged shirts (a tradition among players in international matches) and took some pictures together in each other’s team colours.

They later switched back. Embracing your opponent is one thing, but your team is your team. 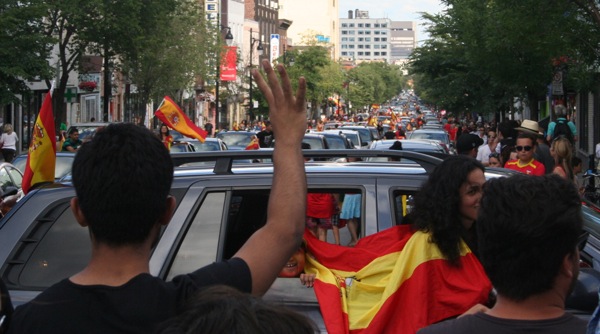 Cars – most of whom have Spanish flags – are stuck on St. Laurent below Rachel after the street was closed for celebrations.

Two blocks down, police blocked off St. Laurent at the corner of Rachel, causing a pretty serious traffic jam. But most of those stuck in their cars didn’t mind. They were honking and flying big Spanish flags, celebrating the victory with fellow cars and pedestrians on the sidewalks. They weren’t in a hurry to get anywhere. 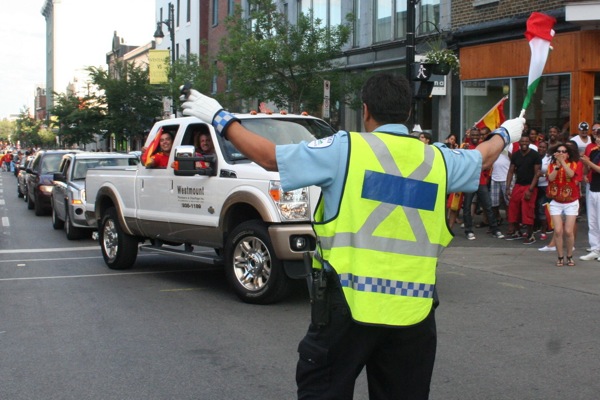 Police officer directs traffic with his Italian flag, to the unending amusement of Spanish fans.

And then there was that traffic cop. Two patrol cars blocked access to St. Laurent, and he stood at the corner, occasionally asking people to stay on the sidewalk so cars could pass through. In his patrol car, a small Italian flag he would occasionally pull out and start waving to get a rise out of the crowd.

They ate it up. Each time the response was laughter on both sides. At one point, fans started asking to have their photos taken with this guy. 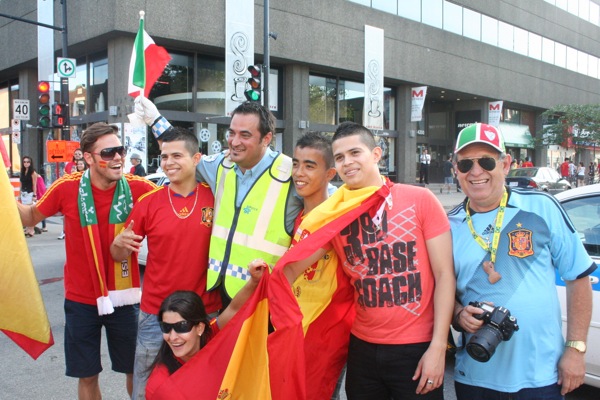 Spanish fans (and an Italian photographer) pose with a cop and his Italian flag on St. Laurent after Euro 2012.

The crowd was pretty solidly one-sided. One of the few times a car came up with Italian flags on it, the officer walked over and shook the hand of the passenger, prompting some good-natured boos from the crowd.

An hour or so later, the crowd outside the Club Español had thinned, and police wanted to reopen the street. A supervisor came over to give instructions. Rather than scold the officer for posing for photos instead of directing traffic, he seemed just as amused at the absurd assignment for an Italian traffic cop.

As the road reopened, celebrations continued. Fans on the sidewalk outside the Club Español cheered cars as they passed by. Many of those cars continued north, all the way up to Little Italy. 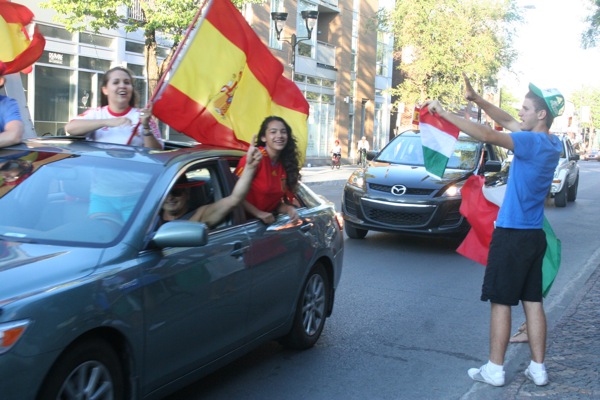 Near St. Laurent and Mozart St., the mood was much more relaxed. Partly because it was later in the day, and partly because people don’t stick around much after a loss. For the cars that came all the way here (this couldn’t have been conveniently on the way home for all of them, could it?), there was a bit of sour grapes. One car burned some rubber at the corner, creating a giant cloud. But happier celebrations continued to rule the day here. A couple of Italian fans waved their green white and red flags at passing cars with Spanish ones, and were even disappointed when they got no reaction.

At one point, a car stopped, and the passenger offered $10 for the small flag the man in the photo above was carrying. He accepted the deal (they had a larger flag to wave around anyway). Even after such a loss, it seemed some people were so eager to show off their Italian pride they bought a flag off the street from a stranger for an inflated price. 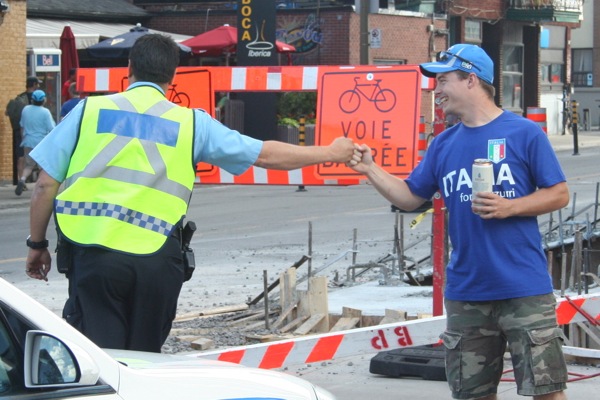 It’s because of stuff like this that I love this city and its seemingly infinite cultural communities. For its reputation as a place that riots after minor hockey victories, it can also party respectfully, it can have fun without becoming stupid. It knows that there many things in life more important than a soccer game half a world away, but that it’s fun to pretend that there isn’t.

Even though my ties with Europe disappeared generations ago, and I’m really not a soccer fan, I’d like to see more of this city come out during major sporting events. Regardless of the result of the game, these Italian and Spanish soccer fans set examples for us all.

Here’s my full set of photos from the July 1 soccer celebrations: 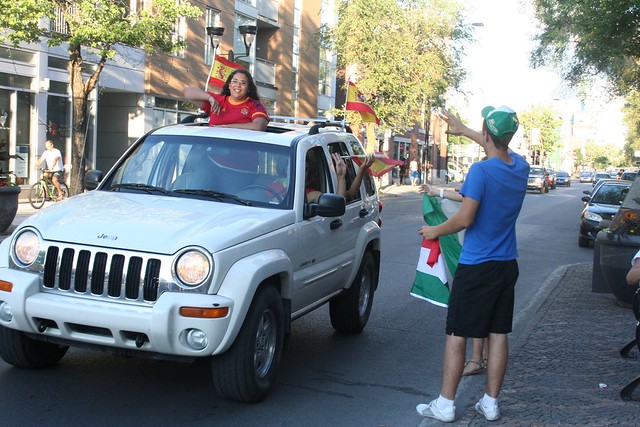 11 thoughts on “Celebrating, win or lose”