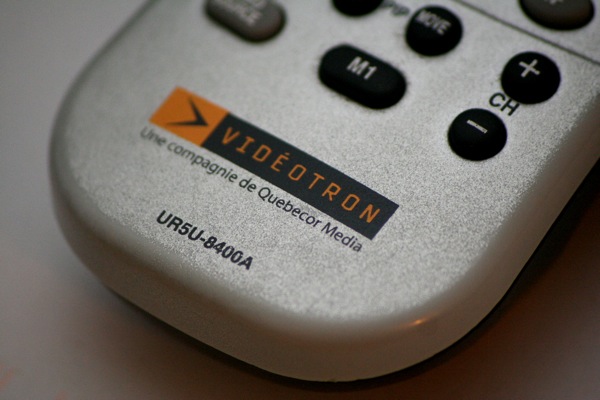 Remote controls for Videotron illico boxes will be needed soon in all homes with television service.

Do you have analog cable with Videotron? According to the statistics, probably not. The cable provider has managed to move more than three-quarters of its TV subscribers to the illico digital service, and the number of residential analog cable subscribers is quite low. A lot of 80-year-old West Island grandmothers who still think they’re getting service from CF Cable TV.

Anyway, last week Videotron took the first step toward dismantling its analog service by issuing a stop-sell order on new analog cable television subscriptions. Existing customers will continue to have service, but should expect to be forced into digital cable some time over the next few years.

How long exactly isn’t clear. Videotron vice-president Isabelle Dessureault wouldn’t put an exact date on it. But a timeframe of, say, 18 months is realistic, giving the company all of 2013 to make the transition.

You can read more about Videotron’s plans in an article I wrote for Wednesday’s Gazette, and another I wrote for the website Cartt.ca (subscription required).

This transition particularly affects the West Island, because it’s an area with a lot of analog television subscribers, and the western region of Montreal that Videotron inherited from CF Cable is the one that still has the most analog channels (55, according to a website that tracks Videotron’s network in detail, though that includes TVA’s Télé-Achats, which has just been shut down.) Some services have already been pulled off analog cable, like YTV and CMT.

Videotron has already started making this transition in Gatineau, where it killed the analog Telemax service and reduced its analog cable offering to a bare-minimum 30 channels (mostly local stations and must-carry channels). There, it offered free set-top boxes for existing analog customers (and free 36-month rentals for those who have a digital subscription with additional sets on analog cable). Dessureault wouldn’t say whether similar offers would be made in Montreal, but expect something along those lines. Dessureault explained that most set-top boxes are subsidized by Videotron – even the ones people buy – so the lower the price the higher the amount of the subsidy. It would probably be worth it to free up all that space and charge people more for more channels (not to mention prevent people from moving to Bell), but we’re talking about a serious outlay of cash to get thousands of homes set up with these boxes.

Don’t worry too much about losing your service right away. Videotron will walk people through the transition when it eventually happens.

It’s hard to understate what the disappearance of analog cable would do for Videotron’s ability to pump out more service. Each of those 55 channels is 6 MHz wide (the same bandwidth as an over-the-air television channel). In the space of each of those analog signals, Videotron could, through its QAM digital encoding, put through seven standard-definition channels or two high-definition channels, Dessureault tells me. An analysis of Videotron’s encoding system shows those numbers are actually higher, with some of those 6 MHz channels carrying three HD channels and as much as a dozen standard-definition ones. (The difference is compression – the more compressed the signal, the more channels you can fit in that block, but the lower the quality.)

Analysis of a 6 MHz Videotron QAM block at illicotech.com shows 12 SD channels and six audio streams in a space that would have been used for a single analog television channel

Doing the math, those 55 analog channels could become 165 new HD channels in addition to the 71 Videotron already has. In other words, tripling its current offering. Or it could become more than 600 new standard-definition channels, which I’m pretty sure is far more than the number of local TV stations and specialty channels that exist in this country.

Most likely Videotron will use the new frequencies to boost the number of SD channels and the number of HD channels, as well as the amount of bandwidth related to video-on-demand service and cable Internet (Videotron wants to particularly improve upload speeds, making the network more symmetrical in upload vs. download). All of this must share the same cable and so must be separated out on different frequencies.

The pressure is definitely being felt most in HD channels. Videotron is adding a handful every year, but space is at a premium. Videotron’s French HD selection is quite good. Well, it has to be, since no French-language commercial television service is going to be successful in Canada if it’s not on Videotron. But in English HD channels, Videotron lags behind Bell TV, which is aggressively trying to woo potential customers in the Montreal area with its fibre-optic Fibe service. Videotron only recently added such popular channels as Space and Discovery in high definition, and it’s still missing Showcase, Food Network and HGTV (though Videotron will add those three by the end of the month). MuchMusic, OLN, Comedy Network, CTV News Channel and YTV are other channels that should be high on the list of HD channels to be added to the grid.

And, of course, there’s still the continuing cry from customers to add AMC. Sorry, wish I had good news about that one. Videotron is aware of demands for it, but it seems discussions between Videotron and AMC haven’t borne fruit yet.

After the Gazette piece was published, I got an email from someone who was thinking this move was more about Videotron wanting to push people off analog cable than it wanting more space for HD channels. A Cult MTL piece discussing this issue also frames it as a screw-the-poor move by Videotron.

While I don’t doubt for a second that Videotron’s main goal is profit, I have no reason to doubt its explanation. It has a bit of room left for new HD channels, but by 2014 it will be extremely limited, and the number of new channels and number of existing ones upgrading to HD will only grow.

Before saying they’re screwing customers, let’s see if they actually do it first. If Videotron offers set-top boxes for free (or as a free rental), as well as a digital channel package that gives the same channels for the same price, the net cost difference to the customer will be zero, combined with a hefty equipment subsidy on the part of Videotron.

This news was also discussed on DSL Reports and Reddit.