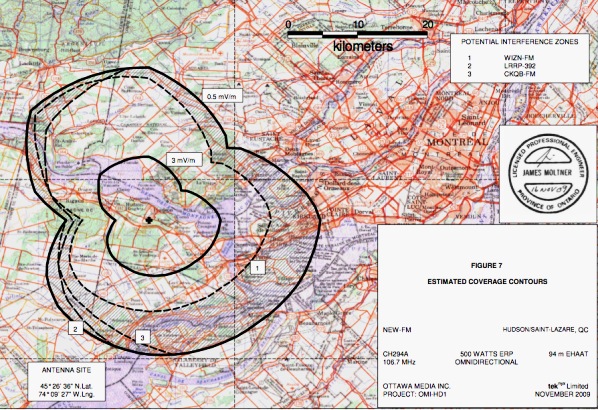 The Montreal area is getting another radio station. On Friday, the Canadian Radio-television and Telecommunications Commission approved an application from Dufferin Communications Inc. for an English-language radio station in Hudson/St. Lazare.

The station would be a local one, with 500 watts of effective power, operating on 106.7 MHz and playing easy-listening music, similar to that of its other stations that are part of the Jewel network. (Dufferin says the station’s branding hasn’t been decided yet, but “Jewel” is an option.) The application called for 110 hours a week of local programming, including four hours and 22 minutes a week of “pure news”, of which half would be local to the area.

I summarize the decision in this story for The Gazette’s new Off Island section, which targets this community.

This will certainly mean jobs for journalists and radio workers in the region. Dufferin vice-president Carmela Laurignano tells me they plan to hire 15-20 people in total to work at the station. The proposed station’s financial projections show revenue gradually growing from $480,000 the first year to $1 million in the seventh year of its license. Expenses would start at $700,000 (including a $90,000 startup cost) and reach $850,000 in the seventh year.

About 95% of its advertising revenue is expected to be local, with 20-30,000 minutes sold a year at an average rate of between $22 and $34 a minute.  Under these projections, the station would start making money in Year 4 and pay for itself in the seventh year.

The application was not without opposition:

In the end, the CRTC dismissed the objections. The commission found that the station’s pattern would not significantly compete with large Montreal radio stations because the signal does not reach far into Montreal. It did not compete with CJVD-FM because they’re in different languages, and most importantly 106.7 FM is not a viable frequency to use in Montreal itself because it is too close to CHCR’s CKIN-FM 106.3 and would cause too much interference. (Though CHCR itself applied to move CKDG-FM to that frequency from 105.1, thinking it would get a better signal. It later withdrew that application.)

Dufferin Communications is also the company behind Radio Fierté, a French-language music and talk station aimed at Montreal’s LGBT community that got CRTC approval to broadcast at 990 AM after CKGM vacates that frequency. Laurignano said they expect to get moving on that station in the new year.

Though Radio Fierté has already been approved, the Hudson/St. Lazare station’s application predates it. It was first filed in February 2010.

Dufferin Communications has two years to get the station running unless it asks for an extension from the CRTC. That means it must be up by Oct. 19, 2014. The licence expires on Aug. 31, 2019. Laurignano said they expect to have it on the air by the fall of 2013.

And by the way, fans of National Public Radio can breathe. Dufferin had listed as an alternative frequency in its application 107.9FM, which is the frequency used by the Vermont Public Radio transmitter that covers northern Vermont and much of Montreal. Unless someone else applies for that frequency (which isn’t protected from interference here), VPR can still be heard on it.