I’m going to tell you a secret about journalism. Some of the most thoroughly-researched reports, the ones splashed across the front pages of newspapers and magazines and given top billing in newscasts, take a gamble on the truth.

It’s not just the sensationalist media like Sun News or the Journal de Montréal, it’s La Presse, The Gazette, Le Devoir, CTV, Global, CBC. It’s almost everyone (I’m hedging my bets here – I don’t know of any media that outlaws this practice by policy).

It happens almost every time journalists or their editors use the word “exclusive”.

Now, it’s very rare that they get this wrong. It’s like betting that Université Laval wins the Quebec football championship (says the frustrated Stingers fan). And when it does go wrong, it’s not the end of the world. Nobody gets sued, nobody loses their job, it’s just a bit embarrassing when someone points it out. 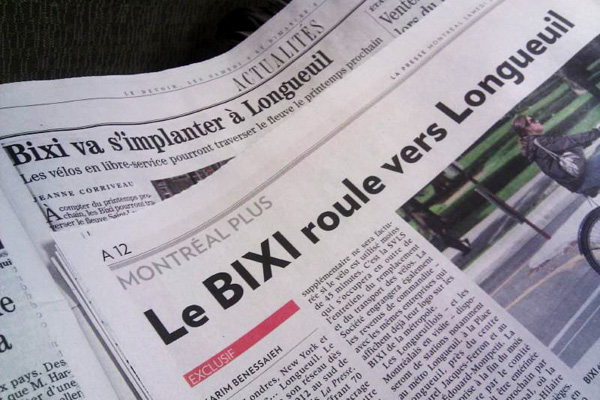 La Presse reports as “exclusive” a story that also appeared in Le Devoir the same day.

Take this story. It happened a year ago. La Presse finds out that Bixi is expanding to Longueuil, and presents it as an exclusive. But Le Devoir also found out, and published its own story that same day. Le Devoir didn’t use the “exclusive” label, but did write “a appris Le Devoir”, which is, of course, correct.

I tweeted about it, and there were some giggles, but that was it. No scandal here.

So how does this happen?

For most journalism, particularly for the mainstream media, the source of stories is easy to figure out. Some stories come from the police media spokespeople, reporting on the car crashes and crimes and other events that required emergency services. Some stories come through press releases or other ways that companies push the media to talk about them in a good light. Some stories come out of things said publicly by politicians or published by government bodies. Some come at prearranged sporting events, or special screenings given to journalists. Some stories are stolen from other media (“matched” is the term – crediting the other media only when the story has facts that can not be confirmed).

But then there’s the rest. The stories that require real work. The ones that require months of investigation through talking to sources and filing access to information requests. That ones that come because a journalist is the only one paying attention to a story when it breaks. And the ones that are handed to journalists on silver platters by people who may or may not have personal agendas wanting to see secrets exposed.

When these stories are published, the question comes up: Is this an exclusive? Does some other journalist have this? Could anyone else also possibly be reporting on this?

For long investigations, the answer is almost always no. I mean, what are the chances that another journalist has also been working for days, weeks or even months on this same story and is going to publish it the same day? Virtually impossible.

For stories based on polls, exclusivity is contractual. Exclusive polls are paid, with the understanding that the company or companies that pay for it get first dibs at reporting its results. And even if another poll comes out that reports the same thing, a newspaper can still say that their particular poll is exclusive to them.

Stories that are leaked to journalists, however, are more likely to suffer the embarrassment of being proved wrong. After all, if someone wants to leak something, they might tell more than one journalist about it. In these cases, journalists are extra careful, relying on how much they trust the source when that source says that he or she hasn’t told any other journalist about this story.

“Exclusive”, at its very basic, is the statement that “no other media is reporting this story”. But it’s impossible to prove this kind of negative. Even if you could poll every single news outlet that might have an interest in a story (and there are a lot of them out there), they’re not going to tell their competitors about a major investigative story they’re working on.

So it’s a gamble. The journalist asks “what are the chances that someone else has this?” and if the answer is “infinitecimally small”, then the “EXCLUSIVE” label is slapped on. And fingers are crossed that the infinitecimally-likely doesn’t become true. 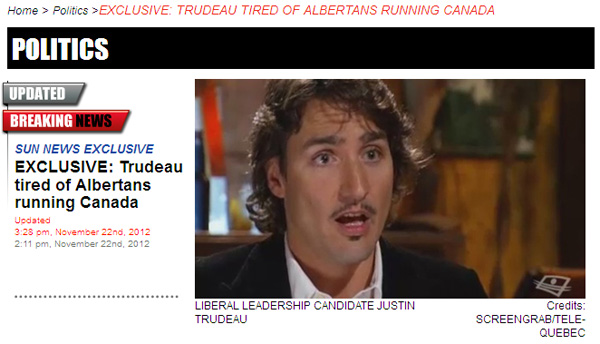 This week, there was a less ambiguous abuse of this term by Sun Media. It published a story on Thursday afternoon reporting “exclusively” about comments Justin Trudeau made about Albertans running the country.

They knew about the comments because Trudeau made them two years ago on an episode of Les Francs-Tireurs, a current affairs series on Télé-Québec. They just haven’t been reported much in English until now (though the segment’s end, with Trudeau demonstrating how to fall down stairs, did go a bit viral).

The Sun story (which was also referred to as “breaking” in the hours after it came out) was uniquely about Trudeau’s comments. It had no new exclusive information. So was it an exclusive? Can publicly-available information be considered exclusive if you’re the first to report on it in your language? Arguments could be made either way.

What’s worst about this is that public mocking of the Sun News “exclusive” hype detracted from the story, which is perfectly fair game. Trudeau’s comments are newsworthy, and seem to fit the narrative of a politician pandering to Quebec by demonizing another part of the country. Trudeau predictably walked the comments back and apologized for them, and the situation rightly got coverage in mainstream media. But none of that required Sun News to call the story an “exclusive.”

It’s particularly sad that the story is by David Akin, one of the more respectable figures associated with Sun News Network. I’m hoping that the decision to play this as an exclusive wasn’t his but an editor’s, and his loyalty to his employer is preventing him from contradicting them on it.

I’m not sure how Akin and Sun found this story, either. Did a Conservative opposition researcher leak it to him because the Tories were worried about losing Monday’s by-election in Alberta? Or was Trudeau’s past researched in light of his decision to enter the federal Liberal leadership campaign? Or do Sun Media journalists just spend their downtime looking through Télé-Québec video archives?

So next time you see someone say a story is an “exclusive”, ask yourself how they know that. Chances are, it’s just a (really good) guess.

And I’m telling you that exclusively.

4 thoughts on “The journalistic fraud of “exclusive””