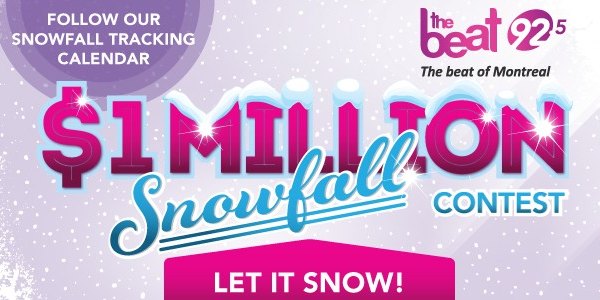 But it’s highly unlikely we’re going to be seeing a $1-million payout.

The listener who guesses the correct date (or a random draw if multiple listeners guess it) gets $1 million. Or, more accurately, they get $25,000 a year for their lifetime or 40 years, whichever is shorter.

Here’s the catch: Now it has. See below.

According to Environment Canada’s historical data, which goes back to 1941, the largest single-day snowfall in December in Montreal came on Dec. 16, 2005, and that was 41.2 cm.

And if we don’t get a day with a record 45 cm of snow before Dec. 21, nobody wins the million.

That was enough to get radio rabblerouser Ted Bird to create a parody of the contest for TSN 690.

The Beat’s general manager Mark Dickie acknowledged that the chances of a grand prize winner are slim, and that the station hasn’t really been emphasizing this fact in its promotion of the contest.

But he said the point is “the fun of the game,” and it’s not like anyone’s paying to enter.

Besides, it’s not that they don’t want someone to win. Because they’re not the ones who have to pay the prize.

Dickie said the station took out an insurance policy for the full amount. He wouldn’t say how much it cost, but it’s four or five figures, or significantly less than $1 million. This is because of how unlikely it is that Montreal will hit 45 cm of snow in a single day before the end of the contest on Dec. 21. The insurance company, he said, gave them options as far as how much the premium would be for different snow amounts, and 45 cm worked for them. It’s not impossible, but it’s also unlikely enough that it doesn’t break The Beat’s bank.

And since The Beat technically has no financial stake in this anymore, Dickie said they’re also hoping that someone wins.

“We would love to see a winner,” he said. “Obviously the insurance company wouldn’t.”

That might not be enough to satisfy critics like Bird. But is it unethical or deceptive? I’ll leave that for you to decide.

In the meantime, The Beat’s insurance company isn’t exactly dreaming of a white Christmas.

UPDATE (Dec. 22): The contest is over, and there’s no winner. Preliminary Environment Canada data shows a total of 27.8 cm of snow for the entire month, and the largest daily snowfall of 13 cm on Dec. 18. That’s less than a third of the 45 cm they needed, and nowhere near a record.

UPDATE (Dec. 28): Six days after the end of the contest, a record-setting snowfall of … wait for it … 45 centimetres in one day. What are the chances?

That news prompted a war of words on Twitter between Bird and Beat Program Director Leo Da Estrela:

@manofbird did . And he was as classless as they come in doing it. RT @Shaun925thebeat: CONFIRMED: 45cm ." Who said it couldn't happen?!

@Leo_DaEstrela @Shaun925thebeat I might take that to heart if it came from a real broadcaster whom I respected and not a glorified op.

It's quite clear you have no respect for anyone . At least some r glorified and not washed up @manofbird: @Leo_DaEstrela @Shaun925thebeat

@manofbird we missed it by 6 days. I'm waiting to crap on one of your ideas but I have to wait until you have one.

RT @manofbird: sounds good, maybe you can mail it in like everything else

@Leo_DaEstrela That "comeback" defines why you're the paper pusher and I'm the broadcaster.

7 thoughts on “The Beat’s $1-million gamble”