At its meeting Wednesday night, the STM’s board of directors approved something I found a bit odd: a new fare designed specifically for the westbound 747 bus.

The 747 already has a special fare. Now they’re going to have different fares for different directions?

Not exactly. Carl Desrosiers, the STM’s general manager, explained after the meeting that the transit agency is about to install a series of new machines along the 747’s westbound route, that will allow people to get tickets for the bus using their credit cards.

The machines will be installed at every westbound downtown stop along the 747’s route some time in the coming months, and we could see more of them on the STM’s network if the pilot project goes well.

The fare for the 747 is $8, and goes up to $9 in January (even with the reduced fare hikes announced earlier that day). Not only do the buses not accept credit or debit cards, but they don’t accept paper money either, which means people have to pay this fare with at least five coins.

So these machines will be a way for tourists and others heading for the airport to be able to pay for a fare without having to find a metro station or get lots of change from someone.

Desrosiers says the new type of fare will cost the same as the usual 747 fare.

But why only for westbound buses? Desrosiers explains that those coming from the airport can use a special vending machine just inside the terminal next to the bus stop, so there’s no need for a similar device. 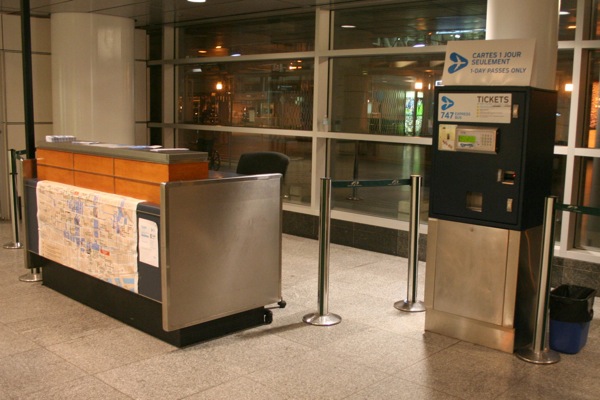 Information counter and fare machine at Trudeau Airport next to the 747 stop.