This fall, Astral Media’s three English stations in Montreal — CHOM, CJAD and CJFM (Virgin Radio) — moved from Fort St. to Papineau Ave. The goal was to consolidate Astral’s five radio stations, allowing them to share resources, including a newsroom.

I got a couple of chances to visit the new offices, once for interviews with a couple of personalities and again when they held an event for clients. Here are some photos to give you a sense of what it’s like inside. 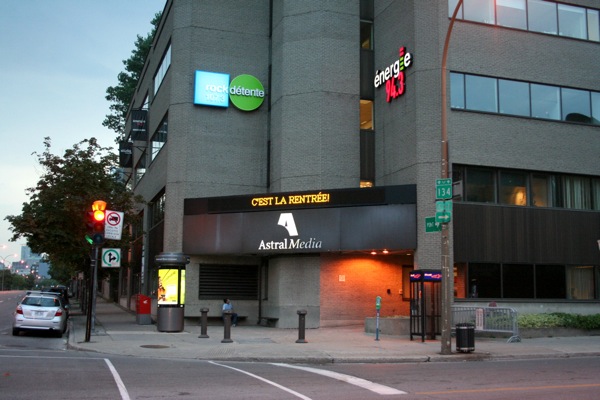 I just realized when producing this post that I don’t have a recent picture of the exterior of the Astral Media building at Papineau and René-Lévesque. The one above was taken in August 2009. On the front are logos of the two French stations, both of which have rebranded. Rock Détente (CITE-FM) is now Rouge FM, and Énergie (CKMF-FM) is now NRJ (with the same pronunciation).

Anyway, the outside hasn’t changed much, except for the logos. It’s inside where everything’s different. The offices have been renovated. There’s glass everywhere. Even the office of Astral vice-president Martin Spalding is surrounded by glass, so anyone in the nearby CHOM studio can see what’s going on in there. 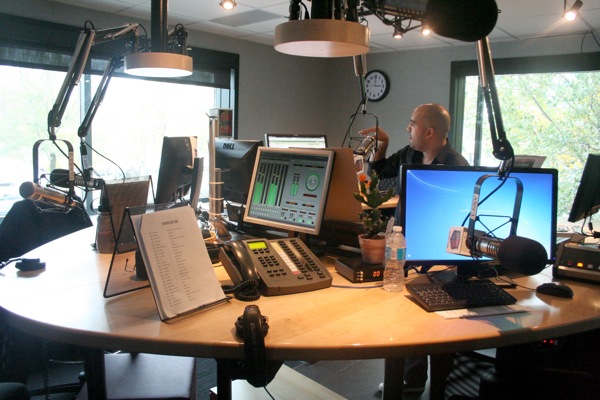 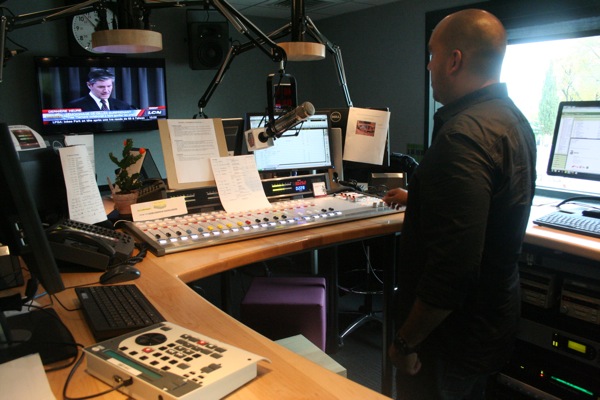 Here’s Bilal Butt in the CHOM studio. Like other studios in this building, the most striking feature is the big windows that let in a lot of light during the day. CHOM’s former studio had a window facing Fort St., but wasn’t nearly as bright as this.

The other major change is the height of the desk. Announcers and technicians can now operate the controls while standing, which they couldn’t in the previous studios. Some, like Butt, like this option, feeling more comfortable and knowing that their voices sound better when they’re speaking from a standing position. 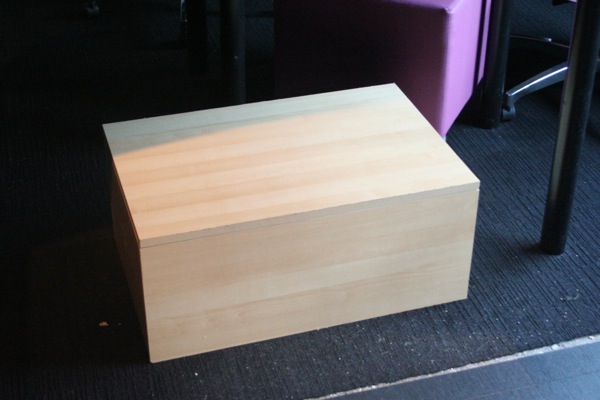 A wooden box acts as a footrest under the CHOM desk

There are still chairs that people can use. But they’re high off the ground, which means legs can dangle. Butt tells me Tootall came up with a solution, building this wooden box for whoever is sitting at the controls to keep grounded. 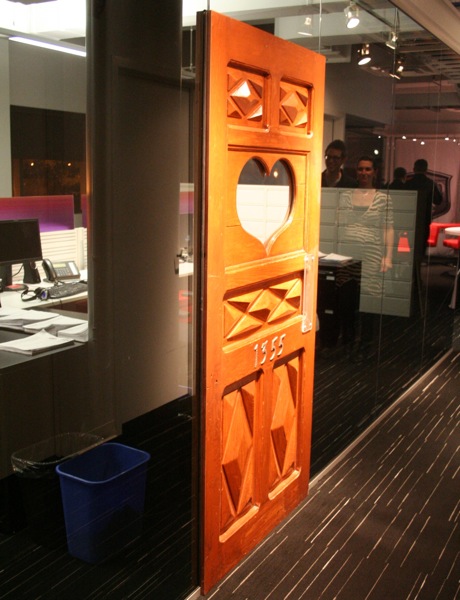 Speaking of staying grounded, CHOM kept a tradition alive by bringing with them this door and its heart-shaped window. The number 1355 is a reference to 1355 Greene Ave., CHOM’s home in the 1970s. They took the door with them when they moved out and it has moved with the station ever since. Now the door sits attached to a glass wall along a hallway between CHOM’s studios and Virgin’s studios. 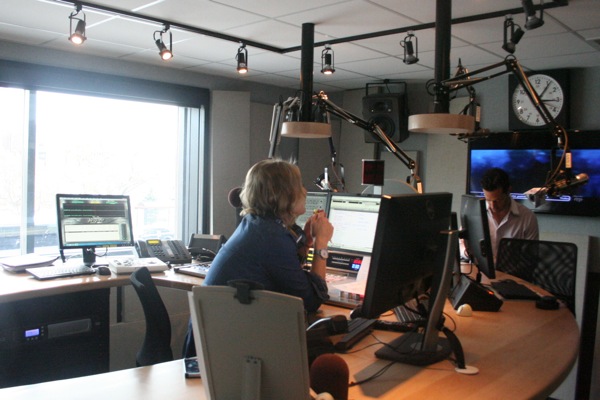 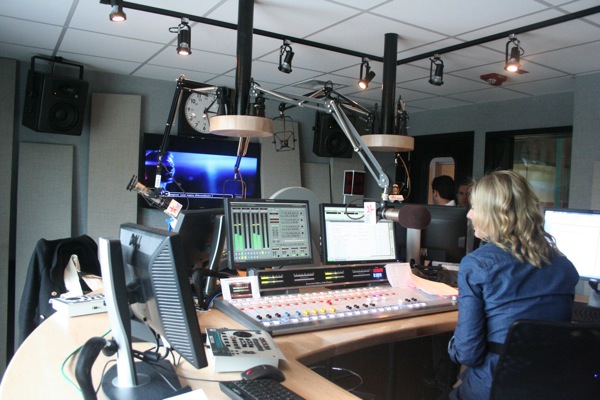 Virgin Radio’s studios are similar to CHOM’s, except they don’t get a corner office. Nevertheless, there’s a lot of light, especially compared to the former studio which didn’t have a window. 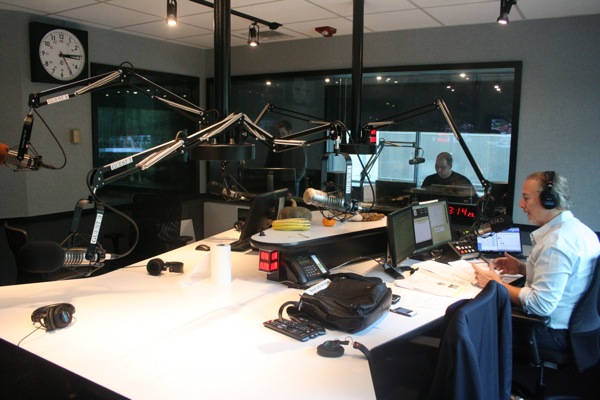 The largest space on the second floor is given to CJAD, since it’s a talk station and has a news department. It’s the only one with a separate control room (seen in the background of these photos). There’s also a small separate newsroom, and separate production studios to be used for various purposes.

Like with Virgin, CJAD didn’t have windows in its previous studio, so it’s a big change. 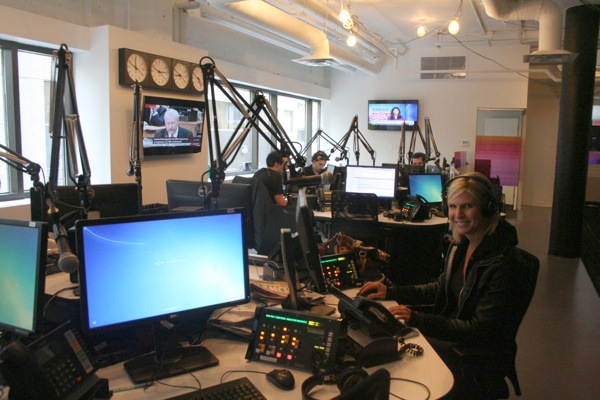 Down the hall from the studio, past desks for producers, is CJAD’s newsroom. As you can see, it consists of a couple of large desks with computers and microphones all around. (The microphones are used to conduct interviews.) 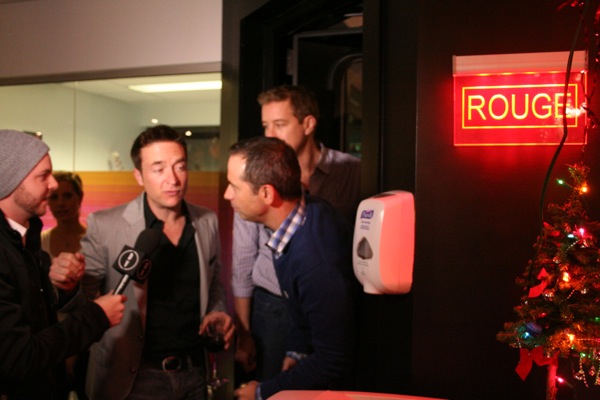 I didn’t get a chance to take photos inside the NRJ and Rouge FM studios. But here’s a picture of Les Grandes Gueules being interviewed outside Rouge FM. 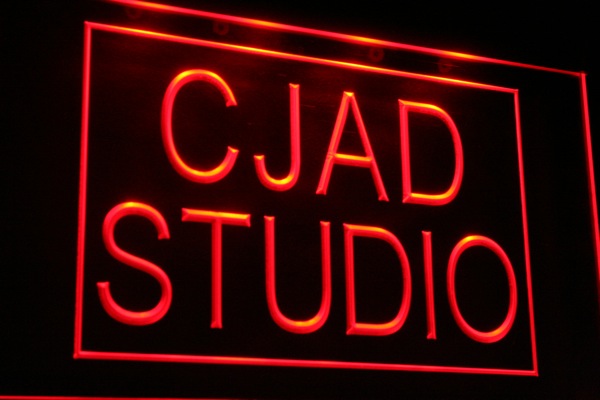 Each studio has a sign like this outside, that lights up when on air. They look cool, but one could lead to misunderstanding when there’s someone standing in front of it: 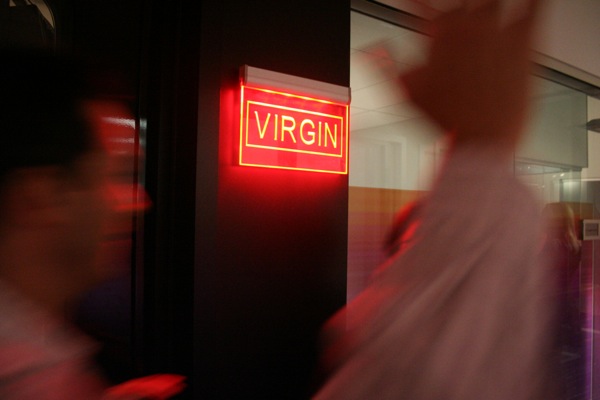 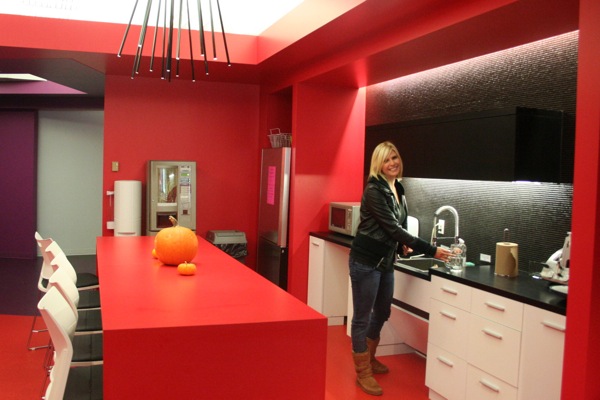 There’s a kitchen in the centre of the floor, which is painted all in red for some reason. But it looks nice. 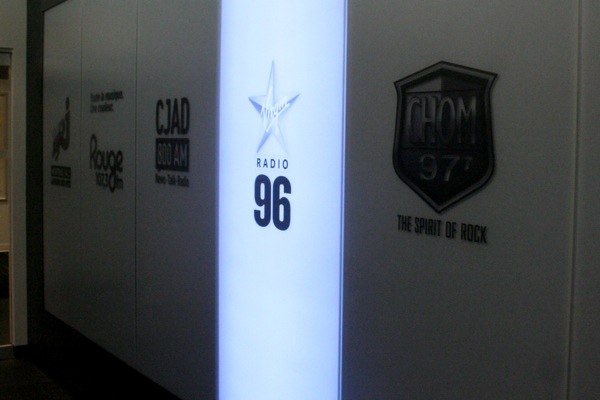 There are also a couple of features that take advantage of the fact that there are multiple radio stations here. This photo shows the hall just outside the elevators. Five large panels, one for each station, light up in sequence as that station’s audio plays on the speakers. 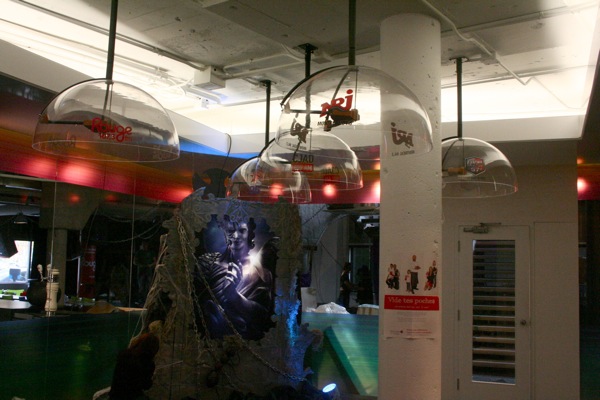 In the lobby downstairs, there are five hoods with benches underneath. They’re designed so that the person sitting under them hears just that station. They’re actually quite effective. It’s not like a cone of silence, but the directionality of the sound is sufficient that being underneath each speaker you hear that station clearly and the others not so much.