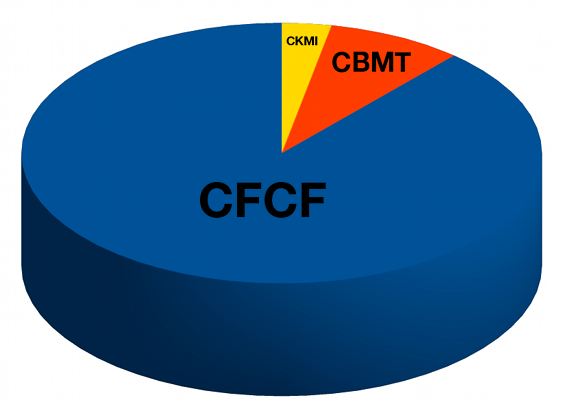 Its competitors might be expanding their local programming, but CTV Montreal isn’t exactly quaking in its boots. Ratings released this week by BBM Canada show CFCF with huge leads in its local newscasts in all time slots.

For the flagship newscast at 6pm, CTV has a 58% market share among adults, which not only puts it far ahead of its competitors, but means that there are more Montreal anglos watching CTV News at 6 than there are watching everything else on television combined during that hour. It’s hard to beat ratings like that. As I mention in a story in The Gazette, the local newscast has more viewers than even the most popular CTV primetime program, The Big Bang Theory.

CBC, the closest competitor, can barely be described as such. With a 5.5% share, it has one tenth of the viewers of CTV at 6. Global is even further behind with a 2% share and only 4,100 adult viewers, which I would describe as less than its previous numbers but that might have more to do with statistical error than an actual drop in audience (I’d also be comparing 18+ and 2+ audience, and might be missing the thousands of teenage viewers to Global Montreal’s newscast).

If either station wants to seriously challenge CFCF for viewers, there’s still a very long road ahead for them.

The BBM numbers above represent measurements taken via written diaries on Oct. 18-31 and Nov. 8-21, 2012, during which all three stations’ newscasts presented special reports. The next measurement of local English television will be taken in February and March, and released on May 7. At that point we should have an idea of how Global’s new morning show is doing early on, and whether it has started eating away at the 41% market share held by Canada AM.