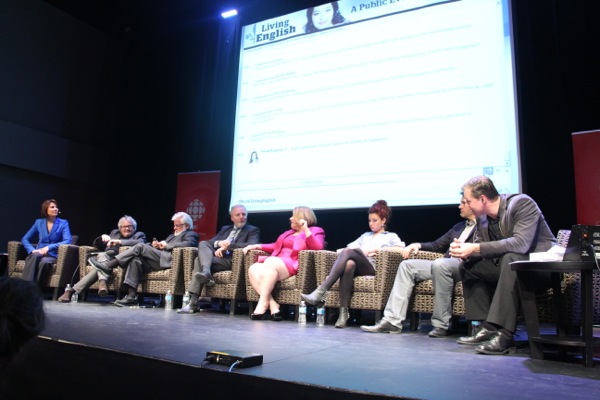 It started with a chuckle when Jean-François Lisée raised his hand after moderator Mike Finnerty asked who in the crowd thought the English language needed protection in Quebec. It could have been seen as a good-natured laugh at the idea that a Parti Québécois minister, a member of a cabinet that pushes for stronger language laws, believes the English language needs help.

It got worse about 16 minutes in when blogger Tamy Emma Pepin tried to explain language conflicts in a historical context, saying that while historically francophones have felt oppressed by anglophones who had economic power here, her generation has no recollection of the days before the Quiet Revolution and there’s less resentment on both sides of the language divide. (She didn’t explain it very well, using the word “superior”, but it wasn’t hard to figure out her point.)

The crowd got angry. One person sitting near me actually said out loud that she was lying about history.

As the night went on, the interjections from the crowd got worse, and the entire event even more awkward and infuriating for spectators like me who came to hear a polite discussion. 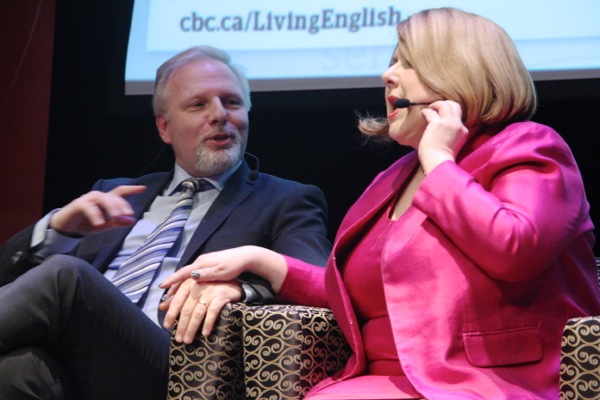 Jean-François Lisée and Anne-France Goldwater in a tender moment

The event was a panel discussion organized by the CBC, the culmination of its Living English special series on the reality of anglophone life in Quebec. Video of the discussion, which lasted an hour and 44 minutes, is posted here.

The panel included a diverse mix of people with strong opinions about cultural issues. There was Terry Mosher, who as The Gazette’s political cartoonist looks at life here through the eyes of a humorist. There was Tamy Emma Pepin, part of the young bilingual generation. But the star of the evening was definitely Jean-François Lisée, the minister responsible for the Montreal region who was also given the job of relations with the anglophone community.

Asked by moderator Mike Finnerty (at the 38:30 mark) if they approved or disapproved of the Parti Québécois government appointing such a person, many in the crowd refused to answer by a show of hands, yelling that it shouldn’t be necessary.

Throughout the discussion, people all around me were heckling, some mumbling under their breath, some talking to their neighbours without bothering to whisper, others yelling things at the stage.

It’s not that I worried that things would get violent, but I wondered how many in the audience were there to listen to a discussion about English culture in Quebec, and how many were there to yell things at a PQ minister who they’re convinced won’t listen to them anyway.

They probably missed some of the important points being made in the discussion, like when Kevin Tierney said that French-language Quebec TV shows need to show more anglophones, and English-language Canadian TV shows need to show more francophones (Rémy Girard notwithstanding). Or when a commenter said that the St-Jean-Baptiste Day celebrations at Parc Maisonneuve should stop requiring its artists to sing only in French (and maybe not be run by the Société Saint-Jean-Baptiste and its anti-anglo leader). Or when Terry Mosher pointed out that Quebec hasn’t seen language-based violence much since the October Crisis, and for the most part its language wars are more humorous fodder for political cartoonists and material for animated philosophical discussions than things to be mortally afraid of.

All of that might have been lost in the cries of “liar” from the crowd and the animated theatrics of Anne-France Goldwater and her hyperactive gesturing in a desperate attempt to pander to the crowd. 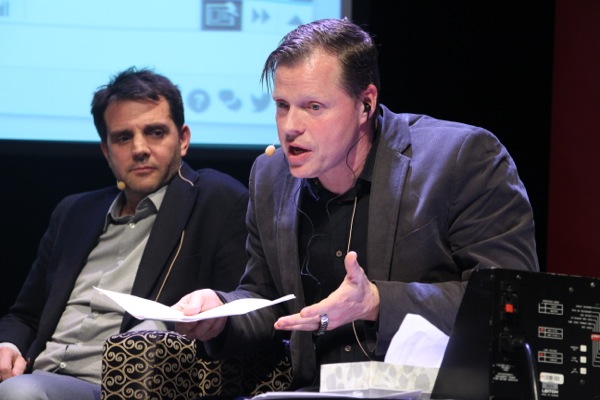 Thankfully, as I watch the discussion posted online, I see that most of the heckling was filtered out since the hecklers didn’t have microphones. But while I was sitting in the audience I had trouble hearing some of the stuff that was said because of the entirely unproductive stuff being yelled around me.

I felt like I’d wandered into an Equality Party rally.

As it turns out, that was partially true. CBC staff told me afterward that members of a group that calls itself Equality Party 2.0 were there en masse and passing out flyers.

It wasn’t the entire crowd (who paid nothing for their seats) that were rudely heckling the panelists. I can’t tell if it was a majority either. But it was easily dozens of the about 300 people present. During the question period, teacher Jennifer Ryan said she brought her CEGEP class with her and didn’t appreciate the heckling. At the very end, movie producer Kevin Tierney (who started off the discussion by calling Lisée out on comments he’d made) thanked Lisée for showing up and showing more politeness than many  in the audience. That remark drew loud applause.

As Bernard St-Laurent mentions late in the discussion (at the 1h32 mark), the treatment of Lisée was actually an improvement on how PQ politicians have been treated by the anglo community in the past. A previous PQ government probably wouldn’t have sent anyone to a similar event 15 or 20 years ago, and if they did that person would have been booed off the stage. 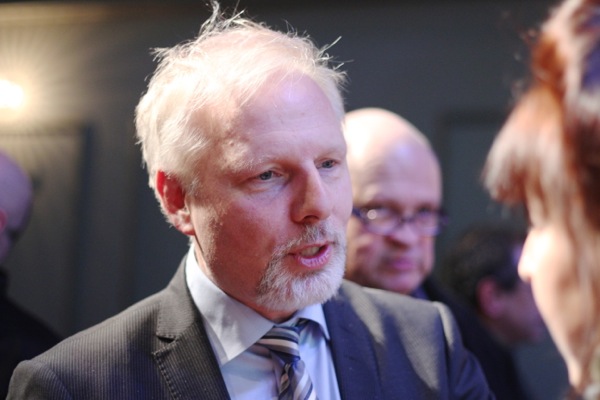 Jean-François Lisée is a member of the Parti Québécois, and a separatist. He’s not trying to hide that. He believes that Quebec would be better off as an independent country. He’s also a politician, so it should be assumed that what he says is calculated to please the highest number of people. As a member of a large party, his views on every issue also won’t necessarily match those of the government (he’s not the language minister, so his ability to make changes at the Office québécois de la langue française is limited to what he can convince his caucus or language minister Diane de Courcy to do). And, as an expert in the art of communication, he has an advantage in spinning things so they sound better than they are.

I don’t for a second believe that Lisée is an advocate for anglo rights in a PQ government. But he is listening, and he is learning, and I’m willing to take at face value his statements that the anglophone community is part of the future of Quebec, until I hear strong evidence to the contrary. In general, having an ambassador in the government is better than not having one, whether it’s for anglophones, first nations or women.

Lisée said during the discussion that there are those on the extremes of both sides of the language divide who want him to fail. There aren’t too many ministers in the same position in any government, and Lisée deserves credit for volunteering to take on this impossible task and give it his best shot.

He deserves better than the treatment he received on Thursday night. Disagree with him, call him out on his flip-flops or inconsistencies, but let him speak and understand that his opinion is not illegitimate just because he sides with the blue party instead of the red one.

Heckling a panel discussion (hosted by the CBC, for crying out loud) to the point of disruption, kicking a gift horse in the shins and cheering the English victory at the Plains of Abraham (no, seriously, that happened too) sends the message that anglophones in Quebec have no wish to discuss language issues reasonably, and gives the PQ more reason to dismiss the anglophone community entirely.

It wasn’t exactly a point of pride for Quebec anglos. In fact, as they say in French, c’est honteux.

The Living English discussion is posted here, with the live blog below. CBC has also compiled some highlights. The Gazette’s James Mennie chats with Terry Mosher about his experience on the panel.