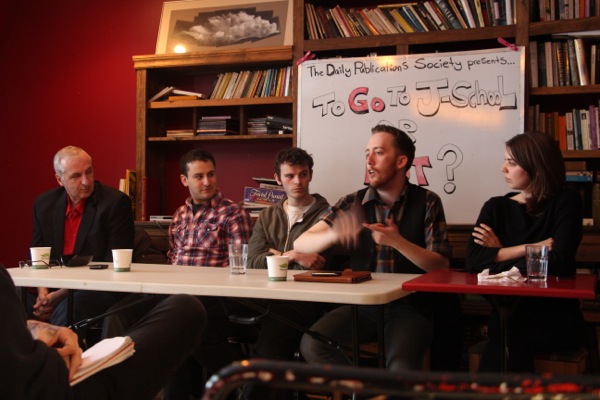 Freelance writer Justin Ling, who tried journalism school but abandoned it, makes a point during a recent panel discussion hosted by the McGill Daily

A few weeks ago, I was invited by my alma mater The Link at Concordia to give a talk. The editor didn’t really care what it was about, she knew me and had invited other people from The Gazette to speak to her staff and contributors on various topics, so she figured I’d be good for just about any subject. I decided to focus on something I thought might be useful for student journalists: how to become an expert in something to increase your chances of getting hired or getting regular freelance work when you graduate.

I came in with the notes I’d scribbled onto a notepad during the metro ride over, and for about half an hour bumbled on about how good it is to become specialized, and how starting a blog and starting to write about something that isn’t getting mainstream media attention would be a great way to start that. It is, after all, how I became an expert on local media even though I started out having no contacts and no formal education in media analysis.

After lots of “umm, one more thing I wanted to mention” and other disjointed thoughts, I opened it up to questions. I got a couple of the pity questions the organizers plant so you don’t feel bad, and a couple of actual ones that I tried my best to answer. But of the 20 or so people present, I could tell by the way they were playing on their smartphones that there wasn’t much interest in what I was saying.

It’s okay. I won’t be auditioning for TED any time soon. I didn’t mind so much that I wasn’t the most riveting speaker they’d ever seen. But I was curious about these 20-somethings (or even 19- or 18-somethings). What were their plans after graduation? What kind of careers do they want to fashion for themselves? I tried to get an idea through a show of hands, but I couldn’t. I don’t know if it was because they were shy or because they didn’t know, or because their vision of the journalism industry was fundamentally different from mine. Without grilling them individually I wasn’t going to get an idea what these journalists of tomorrow were thinking of their future, or if they were thinking of it at all.

What bothered me wasn’t so much that they weren’t interested in me (I’m not terribly interesting, or at least I wasn’t that day), but that they weren’t interested in talking about their future as journalists. If they didn’t want to specialize, find beats to cover and become experts in their fields, just what exactly did they plan to do? Be the 100th applicant for that general-assignment TV reporter job that’s going to go to an industry veteran anyway? Coast on internships until their 30s? Find that mythical left-wing publication that has perfect ethics and yet is stable enough financially to pay its writers? Freelance for pennies for the few publications out there that pay but don’t require much effort? Or just leverage that journalism degree into a cushy PR job? I couldn’t figure it out.

What’s worse is that the students I saw that day are the involved ones. These are the ones who will show up at the office of a student newspaper on a Friday afternoon. Many of them applied for editorial positions at the paper (the deadline for candidacies was the same day I was speaking). When you look at Concordia’s journalism school as a whole, and I suspect many others like it, the situation looks even worse.

On Thursday, I didn’t have much to do, so I sat in the audience of a panel discussion, hosted by the McGill Daily as part of their student journalism week, about whether or not people looking to go into journalism should bother with journalism school (McGill, I should note, doesn’t have one.). Take a moment and imagine this question being asked of any other field, of people contemplating becoming doctors or engineers or teachers or bankers without getting educated in those fields first.

Justin Ling, a freelancer who writes for a variety of publications, told an anecdote of being in a journalism class and the teacher asking what types of journalists the students wanted to become. For most answers, only a few hands were raised. But when the teacher mentioned travel writing, those hands that had stayed down suddenly shot up. Ling pointed out in recalling this story that travel writing is essentially dead, replaced by wire stories or by stories written by people sitting at desks looking at tourism websites. It’s gone, just like the foreign correspondent and other dream jobs young journalists aspire to.

When I talk to young student journalists these days, they still aspire to these kinds of jobs (foreign correspondent and magazine feature writer are common dreams), though the good ones are realistic, knowing that the chances of them scoring such prestigious jobs are one in a million.

I don’t want to trample on any dreams here. Most journalism students are well aware, or at least they say they’re well aware, of the difficulties the industry is going through. They know they’ll have to make compromises once they enter the workforce, sacrificing the salary they would like, the location they would like to work in, or the exact type of job they would like to do. And the truth is that there actually are journalism jobs out there, if you look hard enough, if you’re willing to make those compromises and think outside the box.

But you get the impression that few of these future journalists are spending any time thinking outside that box while they’re in school. Journalism schools have to practically force some of their students to get published at some point during their three-year degrees. Many graduate having barely or never been published even in their student newspapers, but apparently expect a job to be waiting for them when they get that certificate.

I didn’t get my first paid freelance gig until a year after I was hired at The Gazette, so I’m not going to sit here and lecture university students on not getting a front-page Globe and Mail story in their first year. But I was actively involved in my student newspaper for three years before entering journalism school, and my being hired as an intern at The Gazette had a lot more to do with that than it did my grades in that magazine writing class. My application for that internship included five clippings of articles I’d written (and laid out and even taken photos for). It did not include a university transcript.

You can’t practice medicine or law or even operate heavy machinery before getting an education and a licence. But you can practice journalism. While that fact kind of puts the very existence of journalism schools into doubt, it’s also a big opportunity for students to get started in their field before they’ve finished their education. And that’s an opportunity that, if you’re not taking advantage of it, someone else will.

This is why, when I talk to journalism students, I implore them to start doing journalism, to start covering stories that aren’t being covered. It doesn’t matter if it’s for a blog or a university paper or the New York Times magazine (though the latter would certainly be preferred over the former). It doesn’t matter that you don’t have a big name publication behind you. If you’re covering something that isn’t being covered, you’re not competing with the big guys for access.

Practicing the art not only allows you to get better at it, it shows to potential employers that you know how to do it. Writing for a university newspaper doesn’t bring in money, but it shows to that person hiring for that internship that you can meet deadlines, write to assigned word lengths and turn in readable copy in real-world situations. That’s always going to be an advantage.

Being an expert is an even bigger plus. Covering an industry or a topic regularly makes you familiar with it eventually, and turns you into an expert that can be relied upon by others. Knowing your stuff is a big part of being a successful journalist, and having a beat already established is a big plus in finding work.

The faster these young journalists realize this, the better off they’ll be in this industry that is already extremely difficult to succeed in.

I’m participating in a panel discussion hosted by the Professional Writers’ Association of Canada called Working in the Blogosphere: How to create and maintain a successful blog (spoiler alert: I have no secrets about how to make money directly from a blog). It’s Monday at 7pm at the Atwater Library, and it’s free. Hopefully I can impart some of this wisdom on the attendees, though many will be well past journalism-school age.

23 thoughts on “Why aren’t journalism students interested in journalism?”