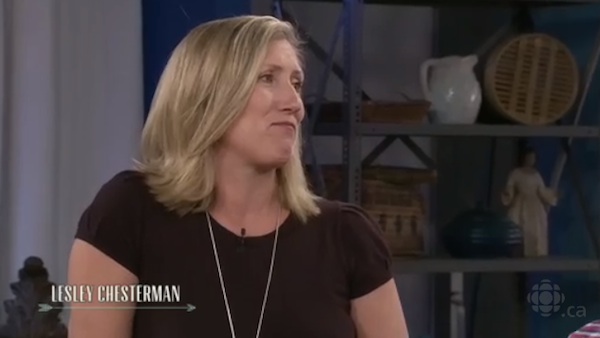 Lesley Chesterman does her debut column on Radio-Canada’s Cap sur l’été on Wednesday.

Restaurant critics have the best and worst jobs at newspapers. They get paid to eat at fancy restaurants all the time, and have the power to make or break them with a review. On the other hand, they’re not recognized in the street because they can’t have their picture in the paper. They have to toil in obscurity so they can remain anonymous while reviewing.

At least, this is the way it used to be. Lesley Chesterman, the fine dining critic for The Gazette, came out and abandoned her anonymity in last Friday’s paper. She did so because she had accepted to become a contributor to the Radio-Canada television talk show Cap sur l’été, which would necessarily put her face in public.

That was the tipping point. But as she explains in her piece, anonymity had already become difficult to maintain:

No doubt, the anonymous approach to restaurant reviewing is desirable, but as the years wore on, it also became less and less doable. A constant challenge was that I knew some chefs long before I began reviewing, and once a waiter has you pegged, he will blow your cover every time you show up in a new restaurant (waiters move around a lot). Also, as a freelance writer, my articles are not just limited to restaurant reviews. I write many feature stories about chefs for several publications, and though I often interview by phone, I have to meet chefs face to face as well.

However, the greatest challenge to anonymity that is unmasking countless critics at a rapid pace is social media. Unlike in the early years, today I have little control over who takes my picture and posts it on the Internet. Though I have asked people many times to delete pictures of me from websites, blogs, Twitter, Facebook, etc., eventually you don’t even know who to contact to remove an image. I accepted the fact that anonymity is a pipe dream, but I still strove for it.

Despite this, she’ll still at least try to maintain some sheen of anonymity, reserving places under fake names and paying in cash. But being recognized will be an unavoidable consequence:

So SIX times during dinner tonight, the waiters asked me if everything was ok. A record.

Chesterman’s first appearance on Cap sur l’été, doing its “Un monde de saveurs” column, was taped on Friday and aired on Wednesday. You can watch it here and marvel at her impressive command of the French language.