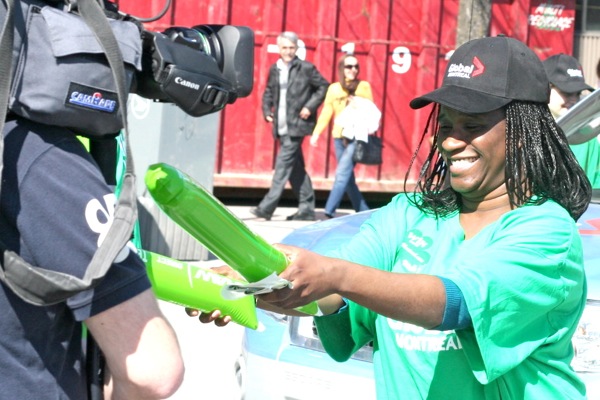 This is how I imagine Elysia Bryan-Baynes celebrates everything.

Global Montreal has finally filled the seat that was vacated by Richard Dagenais when he moved to mornings in January: Reporter Elysia Bryan-Baynes is being upgraded to the anchor desk, it was announced on Wednesday morning. Her first day on air is June 3.

Bryan-Baynes, an avid comic-book reader, has been with Global Montreal since 2003, but this is her first permanent job at the station, station manager Karen Macdonald tells me.

“Elysia has literally been a freelancer here since 2003,” she said. “We’ve had lots and lots of babies and we’ve had lots and lots of mat leaves” that she’s been able to fill. Macdonald attributes the lack of openings both to the station’s tiny size since it drastically cut staff in 2007, and to its bizarrely low turnover rate. “People just don’t leave here,” she said. “So since 2007 since we had the cuts we haven’t had that many departures.”

The new morning show, which brought a handful of new jobs including two anchors, created an opportunity.

“Of all the candidates, her screen test was the best,” Macdonald said. “I think people will be intrigued and pleasantly surprised.”

Bryan-Baynes hasn’t done much anchoring, which Macdonald said was “because she’s had so much else to do” with reporting, including some filling in at the National Assembly. “She’s a really strong anchor, she has a lot of experience news-wise. It requires a lot of experience, because basically they’re by themselves a lot in the evening.”

For her part, Bryan-Baynes says she’s really excited about the new gig. “I’ve loved the work and the team since I arrived in 2003,” she tells me. “Global has always made me feel part of the family. Now its official. For now, I’m feeling excitement and great sense of responsibility. I’m sure many other emotions will hit me between now and when I start in June.”

Paola Samuel has been filling in on the late-night desk most nights since Dagenais’s move.

Global also announced to staff that Gloria Henriquez has officially been named associate producer of Morning News, a role she has been temporarily filling since the show began.

Karwatsky to take over late nights at CTV

Meanwhile at CTV, there’s also a change there to the late-night anchor desk. Catherine Sherriffs will be leaving on maternity leave this summer, and the station has decided to have Paul Karwatsky take over the late-night desk in addition to co-anchoring at 6 p.m., station manager Louis Douville told me. That means Mutsumi Takahashi will be doing the noon newscast solo.