BBM Canada put out its ratings for spring 2013 on Thursday. The top-line data is here (PDF), and as usual the various radio stations did their best to spin things in their favour (see 98.5’s here).

The big picture is that not much has changed. On the English side, CJAD is still the most-listened-to station among all listeners, and The Beat is ahead of Virgin for the second straight quarter. They’re followed by CHOM, CBC Radio One, Radio Two, TSN 690 and classical station CJPX, followed by the French stations.

But while The Beat lays claim to “MONTREAL’S #1 MUSIC STATION”, it’s not the one with the most listeners. When you count the francophone audience, Virgin comes out way ahead. Virgin also claims just about every advertiser-friendly demographic, including ones like people with children at home and people looking to buy a new or used car.

Virgin also claims to be gaining in those demographics.

Among francophone audiences, the top stations among 2+ audiences are 98.5, Rythme FM, Première Chaîne, Rouge FM, NRJ, Virgin, CKOI and CHOM in that order. Nothing surprising here.

Astral crows that Rouge FM has its best showing ever in a PPM survey, including a win For Joël Legendre over Rythme FM’s Véronique Cloutier at lunch hour among adults 25-54 and women 25-54. Overall, the station is still third in adults 25-54, but only one point behind Rythme FM. The only other station to show two straight quarters of audience growth in adults 25-54 is Radio X, but that was a growth to a 2% share (3% among men 25-54).

Broken down by time period, Rouge has gained in weekday mornings, late mornings and early afternoons over two straight quarters. Others have stagnated or dropped. Isabelle Maréchal at 98.5fm has lost almost a third of her 25-54 audience from 10am to noon on weekdays in the past year. Eric Duhaime saw a spike in his noon-hour audience at Radio X, more than doubling since last fall, but still behind Radio Classique among adults 25-54. Virgin has taken the lead back from The Beat among adults 25-54 during the three periods of the workday. 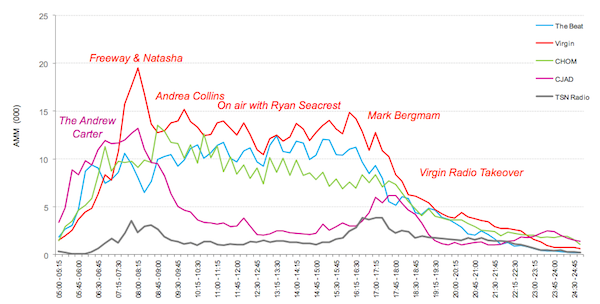 Infopresse has Cogeco Force Radio’s analysis, which includes the above chart showing ratings by time period.

You can read Astral’s ratings analysis here. You can also read their analysis of Quebec City, Saguenay, Trois-Rivières, Sherbrooke and Gatineau markets, which are measured by semi-annual surveys.

In Saturday’s Gazette, Brendan Kelly looks at the phenomenon of more French-speaking listeners tuning into English radio stations than English-speaking ones, and a bit of history that explains why Montreal doesn’t have any bilingual stations. A sidebar to it looks at the latest ratings, and notes a boost for Virgin in Andrea Collins’s new time slot of late mornings. (There’s also a recovery in early afternoons when it’s Ryan Seacrest on the air.)

The Journal de Montréal also has a ratings story focused on 98.5fm.

4 thoughts on “Montreal radio ratings: Not much new here”