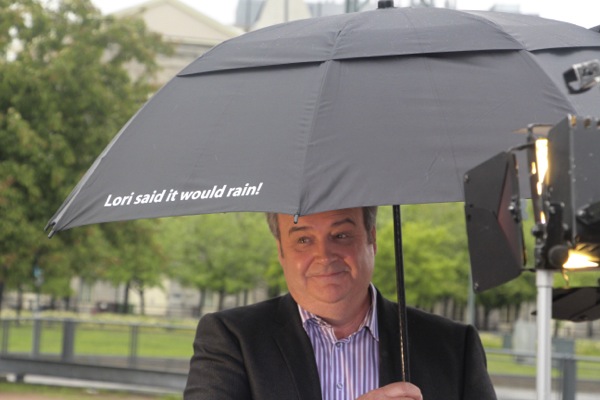 Canada AM’s Jeff Hutcheson shoots a promo with the umbrella

Just after shooting the last Montreal special episode of Canada AM, showing off Gregory Charles at his Vintage theatre in the Old Port, Jeff Hutcheson shot a promo outside for CTV Montreal. It was kinda lame, a fake telephone conversation whose contents I don’t even remember, but had to do with the weather. But the punchline was Hutcheson opening up a CTV News umbrella and turning it around to reveal the words you see above: “Lori said it would rain!”

He shot a bunch of takes of the promo, and had trouble locking the umbrella open each time. Eventually, as they were doing extra takes to fine-tune various points of the bit, it broke: 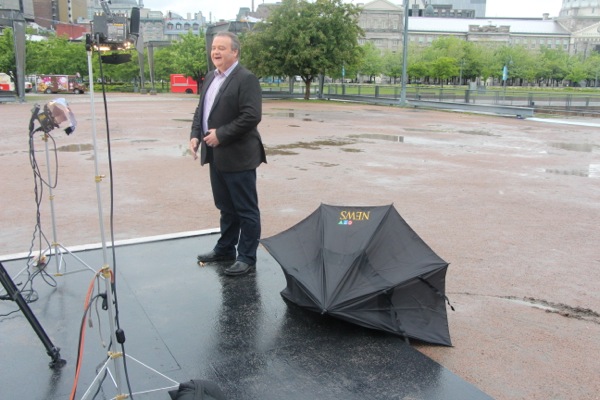 I guess we have it, the producer said to a laugh. They didn’t have a back-up umbrella.

I was fascinated by this umbrella. Was it a one-off? Are there piles of them in a promotion office somewhere? Can you buy one?

Louis Douville, CTV Montreal’s general manager, said they’d ordered about a dozen of them. But my query apparently made him think about “wider distribution, maybe even as contest giveaways.”

He also said I could have one. But blasted journalistic ethics mean I have to turn him down. (I don’t keep swag of non-trivial value unless it’s given away to the general population or was acquired in a non-journalistic context from someone who doesn’t know I’m a journalist.)

My blog’s readers are obviously not a representative sample of the population, but definitely a good cross-section of hard-core fans. (Do local TV stations have those?)

So I put the question to you: Would you buy this umbrella? Or would you enjoy winning one in a contest? Or is it just a bit too cheesy for you to be seen walking around in the rain with?

It’s just as cheesy as I had thought it would be.

10 thoughts on “The “Lori said it would rain!” umbrella”