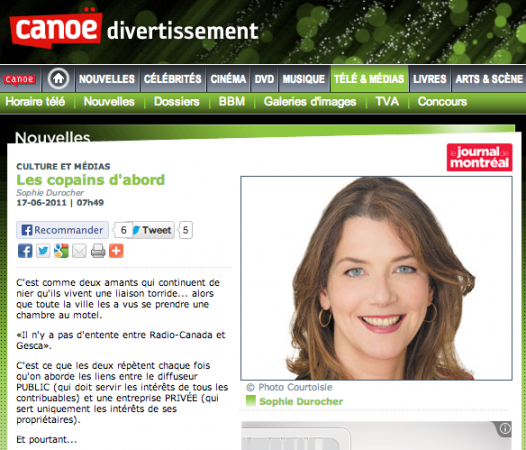 Sophie Durocher’s 2011 column found to have libelled Gesca, was online until after the decision last week.

When it pulled out of the Quebec Press Council, Quebecor’s Journal de Montréal made it clear that it would let only two forces judge it on its content: the free market power of its readership, and the legal power of the courts.

The latter struck against the paper last week when it issued a decision ordering owner Sun Media, its Canoe Inc. division and columnist Sophie Durocher to pay $10,000 to Gesca over a column she wrote that was defamatory toward the rival newspaper publisher.

The dispute was over a column, published in the Journal de Montréal on June 17, 2011, that alleged that during the previous federal election campaign, Radio-Canada had tried to negotiate for Gesca’s Cyberpresse.ca to have free online streaming rights to the leaders’ debate.

Actually, Quebecor disputes that interpretation, so I’ll just have you read her in her own words (bolding is mine):

As it turns out, this wasn’t true, the judge ruled. La Presse vice-president of news Eric Trottier denied it, the leader of the consortium, Troy Reeb of Global News, denied it, and former general manager of news for Radio-Canada, Alain Saulnier, denied it. Pierre Tourangeau, who was Radio-Canada’s other representative on the consortium board, also denied it. All four testified as such in front of the judge: Nothing like this happened. Had she spoken with all of them, at least one probably would have told her that. (She tried to contact both Saulnier and Tourangeau, but couldn’t get comments before publication.) Instead she went with information she got from one or more anonymous sources and rushed it to publication.

There was an actual source who testified to corroborate Durocher’s story. Marc Gilbert, who was a member on the consortium board representing … oh, I’ll let you guess which TV network he was representing. He said he heard during a conference call, possibly during an informal discussion, someone from Radio-Canada (he couldn’t say who) asking about giving broadcast rights to Gesca. Though he said it wasn’t a negotiation, it wasn’t shot down by CTV, TVA or Global but rather someone from CBC, and he said he wasn’t Durocher’s source.

Getting burned by sources happens. It’s happened to me a few times, usually because the source is misinformed and presents information as being more reliable than it is. It’s hard to keep a really juicy piece of information under your hat until you verify it, especially if it’s one of those things people don’t want to talk about publicly, or if you can’t reach the person who can confirm it. It’s embarrassing to be caught on it, but you apologize profusely, correct the misinformation and try to reassure people you won’t do it again.

But that’s not what Sophie Durocher did. Instead, she stood her ground, refused to retract or correct the article (it remained online for two years without correction), and when the case finally got to court she and Quebecor presented some ridiculous defences. Among them:

The judge saw through all of these arguments, and ordered damages of $10,000. Gesca had asked for $75,000, but without any evidence of actual harm done to Gesca’s reputation, it’s getting a fraction of that. The judge also ordered a public apology be issued.

It’s unsurprising to learn that Quebecor plans to appeal. It said as much in a series of tweets, and in a letter from the editor published in the Journal de Montréal on Tuesday.

In cases such as these, motive plays a big part. The court heard that Durocher was essentially responding to an article that had appeared in La Presse the previous day from Marc Cassivi, criticizing Durocher specifically for harping on a “secret agreement” between Gesca and Radio-Canada. She worked on her column until the wee hours of the morning, rushing to get it done using information she had been given weeks before but had only that day tried to confirm. The judge found that she had no real reason to rush this to publication and could have waited to confirm the information before publishing.

In the end, the judge found that there was malice, but not bad faith, in Durocher’s actions. She believed what she was reporting (sorry, opining, because she’s not a journalist) was true, but she was negligent in her duties due to an emotional reaction to Cassivi’s column that robbed her of her objectivity.

Her loss of objectivity didn’t start with Cassivi’s column. It has unfortunately been present for a long time, as it has with many of her colleagues at Sun Media.

The “entente secrète” is a perfect demonstration of this. For one thing, it wasn’t a secret. It was announced in a press release in 2001 (in both languages). And the agreement is no longer valid, having ended without renewal in 2003. And the agreement primarily concerns non-journalistic resources.

Durocher and others have a point about the informal relationship between these two organizations, but choose to attribute it to some conspiracy instead of investigating the real causes.

I spoke to people at La Presse and Radio-Canada after Durocher’s 2010 “Ici Radio-Gesca” column, in which she complains that Radio-Canada too often has La Presse journalists and columnists as guests and freelancers on its shows. The people I talked to explained the situation with these points:

But Durocher continues to insist on the “entente secrète”, to the point where Quebecor tried to enter agreements between Gesca and Radio-Canada into evidence, only to have the judge rule that they were irrelevant to the case.

I hope that Durocher, the Journal de Montréal’s media columnist, steps back and takes this as a sign that she needs to take a more dispassionate approach to her paper’s primary competitors. We need people to keep Gesca and Radio-Canada on their toes, and to criticize them when they do wrong. But as it is what she writes can’t be trusted because it so transparently comes from a place of bitter resentment.

Whether she’s a journalist or columnist, this isn’t helpful for anyone.

2 thoughts on “Sophie Durocher and the “entente secrète” obsession”