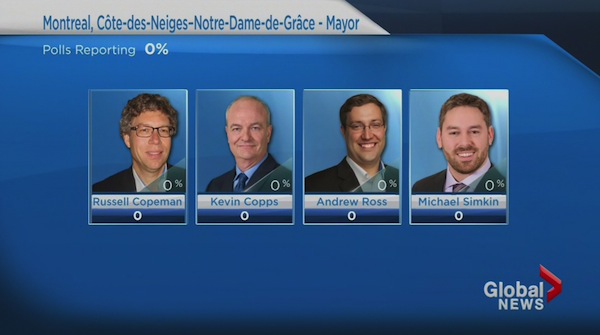 Graphics that will be used on Global Montreal’s News Final election results special.

When the polls close at 8pm on Sunday, Montrealers will be turning to their televisions to watch the results come in. And many will be disappointed.

Though there are municipal elections happening throughout Quebec, and Montreal’s election in particular has been getting a lot of attention, none of the broadcast television stations in Montreal is carrying election coverage before 10pm. Most are keeping the lucrative Sunday primetime schedule as is, and holding live election coverage until the late evening.

For the all-news networks, meanwhile, it will depend on your preferred language (just like with every other story, Montreal/Quebec news is national news in French but not in English). RDI and LCN will have election coverage starting at 6:30pm (presumably covering cities across Quebec, not just Montreal), while the three English networks have no election specials planned.

Here’s what’s going on for each network:

On cable, we can expect extensive coverage from the French networks, but not so much from the English networks:

And of course there’s online, where almost everyone is promising extensive coverage and live results.

I’ll be spending election night on the Gazette news desk, which has all reporting, editing and managing hands on deck, and will be feeding its website throughout the night.

And, of course, you can just go to see the election results yourself.

The four main candidates for mayor were in what seemed like different debates every day, as just about everyone organize their own. If you missed them, here they are again (links to videos where I could find them):

In addition, Global Montreal held four short debates among mayoral candidates for demerged suburbs on the island on its weekly Focus Montreal show: Montreal West and Pointe-Claire on Oct. 19, and Beaconsfield and Hampstead on Oct. 26, and a debate among candidates for mayor of the Côte des Neiges/Notre Dame de Grâce borough on Nov. 2.