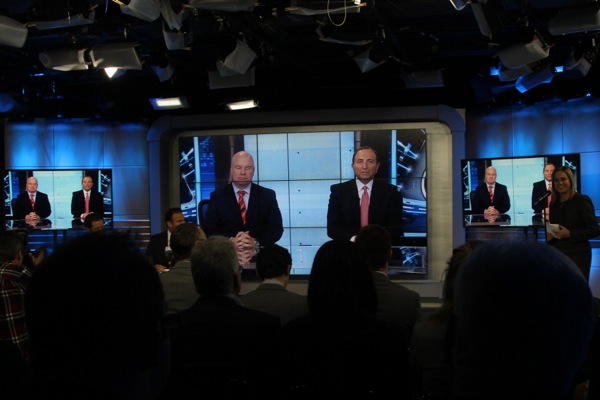 TVA press conference on NHL deal. Scott Moore of Rogers and Gary Bettman of the NHL join by videoconference from Toronto.

It’s the biggest media announcement of the year: A $5.2-billion, 12-year broadcast rights deal between Rogers Communications and the National Hockey league. Included in it are side deals with the CBC (which will air games but won’t get revenue from them or handle their staffing) and TVA, which becomes the official French-language broadcaster.

We’ve suspected for a while that the CBC wouldn’t be able to afford to keep its rights to Saturday night hockey and the Stanley Cup playoffs. But what’s most surprising about this deal is that Bell Media, which owns TSN and RDS, is also a loser here.

A lot of details are still to be decided. We’ll start knowing that in the coming weeks and months.

Here’s a story I wrote for The Gazette about the French side of this deal and how it will affect Canadiens broadcasts. Pat Hickey also has his thoughts on the deal.

In short, here’s what we know and what we don’t know about this deal so far:

What has been reported but not confirmed:

A petition has already started to ask — well, it doesn’t say who it’s asking, but presumably the NHL — to reverse its decision and put Canadiens games back on RDS. This obviously won’t go anywhere. The NHL isn’t going to walk away from a $5.2-billion deal.

What’s funny about this is that the reaction to RDS losing the Canadiens is similar to the reaction when it won Canadiens rights in the first place. Before the 2002-03 season, Saturday night games aired on Radio-Canada. When RDS picked up the rights to the entire Canadiens package, there was nationwide outrage. Heritage Minister Sheila Copps even went to the point of demanding Radio-Canada explain itself in front of a hearing. The summer 2002 controversy led to a deal between Radio-Canada and RDS to air Saturday games on RadCan, but eventually all 82 regular-season Canadiens games became exclusive to RDS.

35 thoughts on “The Rogers/TVA/NHL deal: What we know, and what we don’t”