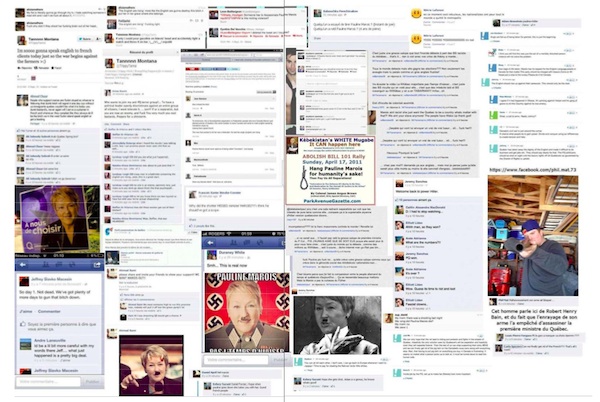 Examples of “francophobia” on social media collected and published in a report by the SSJB.

I really don’t want to write this. I hate wading into language issues, because I know nobody’s mind is ever changed in those debates. And I hate giving attention to something so unworthy of it yet so desperate to get it.

But a manifesto published by a group assembled by the Société Saint-Jean-Baptiste that condemns “francophobia” by, among other things, anglophone media in Canada, is way off the mark, and predictable sarcastic responses by people like Don Macpherson will do little to enlighten anyone.

The thing is, there is Quebec-bashing out there, and attention does need to be paid to it. But a factually-incorrect manifesto that has the focus and self-criticism of a blog post comment thread will just lead the other solitude to conclude that the problem does not exist.

So let’s delve into the document that purports to give an update on “recent” examples of francophobia (Mordecai Richler is mentioned three times even though he’s been dead for 12 years).

Opening to the second page, you see that it’s loaded with footnotes that purport to show examples of statements, particularly in the English-language media, that are anti-Quebec.

But all you have to do is look at those footnotes to realize the statements in question aren’t aimed at French-speaking Canadians or residents of Quebec, but rather at its government. The headlines talk about “Marois” and the “Parti-Québécois”, not “Quebec” or “francophones.”

This is a common theme in this … I don’t know what to call it. A report? A study? It’s ridiculous to call it either of those things. It’s a rant that gives itself the appearance of a report. So I’ll just call it a document.

There seems to be a bizarre inability to separate political criticism of the Parti Québécois government on matters of language and cultural policy and discrimination against all French-speaking Canadians. I find this particularly hard to understand considering that nationalists in Quebec tend to take a more pro-Palestinian stand in the Middle East conflict, a side that is constantly forced to explain how political criticism of the Israeli government is not anti-Semitism.

Reading further into the document, you see that a lot of the examples used are not news stories, editorials or columns, but rather online comments at the bottom of stories posted to websites. Many examples are just taken from social media, entirely disconnected from journalism websites. Hell, they even go so far as to take pictures of bathroom graffiti to make their point.

Among some of the accusations in the document specifically about mainstream media, particularly anglo media in Montreal:

It condemns CJAD for — in the interests of clarity I’ll leave it untranslated — “banaliser la violence politique” for airing parts of an interview with Richard Henry Bain, the presumed election night shooter charged with murder and accused of attempting a political assassination. But the document doesn’t mention that French-language radio stations NRJ and Rouge FM (also owned by Astral Media at the time) also aired those same fragments of audio, which amounted to about 10 seconds total. The document also doesn’t mention that Claude Poirier of LCN also aired an interview with Bain, that Poirier’s interview was longer, and that it was live.

It condemns The Gazette for publishing a photo of Pauline Marois gesturing with her arm extended. It offers no context for this.

It condemns Aislin for apparently not being funny with a cartoon suggesting Pepe le Pew as the Bloc Québécois mascot.

It condemns comedian and CJAD personality Joey Elias for publishing a photo on Facebook of a metro attendant with a sign saying “au Québec, c’est en français que ça se passe!”, which it said he “falsely” interpreted as meaning that the person in the booth would refuse to serve people except in French.

It blames the entire Pastagate affair, including the resignation of the head of the Office québécois de la langue française, on anglo media, because they failed to realize that the original complaint was not about the word pasta. It does not mention that this fact was unknown to the media when the Pastagate scandal hit, that the scandal was condemned as much by francophone media as anglophone media, or that regardless of the nature of the complaint, what the OQLF told Buonanotte to do was to remove the word “pasta”.

But the biggest thing this document seems to condemn anglo media for is for condemning “tribalism”, discrimination and xenophobia in the Quebec government, whether it’s the language laws, the Charter of Quebec Values or any other beef that someone might have with the way Quebec’s laws are written.

In other words, condemning perceived discrimination is itself discriminatory.

Now, a lot of the language used to criticize Quebec is unacceptably over the top. Pauline Marois’s policies are not equivalent to 1930s Germany. There is no totalitarian government here. There is no secret plan to exterminate anglophones in Quebec. And there’s a good point to be made that anglophone Canadians outside of Quebec, who get their information about what goes on in this province from exaggerated criticism of its policies by newspaper columnists and editorial writers, have a wildly distorted view of our government and way of life.

But that point would need to be made by an essay that isn’t so desperate to find proof of a hypothesis it has already assumed to be true.

The most cringe-worthy statements, the ones that are truly francophobic and disgusting, are not published in newspapers or aired on TV and radio. They’re authored by the anonymous, pseudonymous or just plain stupid masses and passed around on the Internet.

Some are from news websites, and any reputable news organization should take them down. As someone who manages a news website myself, I know that there are certain stories that do not allow comments simply because we know in advance that no constructive discussion can come of them.

But a lot of the examples listed are from social media. Like the ludicrously offensive Facebook group “The Lac-Mégantic train disaster was hilarious,” which was rightly denounced by everyone who saw it with half a brain or half a heart.

Unfortunately, there’s little we can do as a society to prevent people from being stupid on the Internet. We thought maybe that limiting what can be posted anonymously and forcing (or at least encouraging) people to use their real names would bring up the level of discussion. But we clearly underestimated the power of stupidity.

But this isn’t a francophobia issue. It’s an issue of society at large. Desperate appeals for attention with shockingly heartless statements are not exclusive to anglophones. (Gab Roy, anyone?)

Every now and then someone posts a roundup of tweets that say disgusting things (they find them by searching Twitter for tweets saying those disgusting things). These tweets don’t come from celebrities or world leaders. They come from 15-year-old kids who just say stupid things to get attention. And we reward them by giving them exactly that.

It’s a problem. But it’s not one caused by language intolerance. Many of the social media comments comparing Pauline Marois to Hitler or saying she should have been shot were written in French by francophones. Suggesting that francophones are discriminating against themselves is as ridiculous as that “self-hating Jew” nonsense that I heard ascribed to Jews in favour of Palestinian rights at Concordia a decade ago.

And it goes both ways. Bernard Landry said that “If Le Devoir compared Stephen Harper to Hitler, I would cancel my subscription.” If the report he signed in support of makes no distinction between what media outlets publish and the user-generated comments that appear on their websites, then he should get on the phone. Because comments comparing Harper (or the Conservative government) to Hitler (or Nazis) are all over Le Devoir’s website.

What bothers me most about situations like this is that there’s a real problem, but the polarizing politicization of it prevents us from having a serious, rational discussion. There are newspaper columnists and media personalities and people in general in the rest of Canada who don’t understand Quebec and say some pretty ignorant things about this society. There are people all over the Internet who say stupid, horrible things because they’re too immature to understand the consequences of their actions.

The truth is that, for reasonable anglophones in Quebec, slurs against francophones or the people of this province in general are as hurtful to us as they are to our friends in the other solitude. We too shake our heads at their ignorance, hoping that the impressionable masses choose to ignore them. And we too deplore the lack of services in French outside of Quebec — if anything, as linguistic minorities ourselves, we have a deeper understanding of the problems they face.

But criticism of Parti Québécois policy, combined with intentionally malicious things said by crazy people on the Internet, is not evidence that anglophone media hates Quebec.

And the “declaration” (supported by 101 personalities — GET IT?), which is more about defending Quebec language policy than fighting discrimination, and which engages in the exact same kind of generalizations of a linguistic group that it purports to condemn, will do nothing to accomplish the group’s goals of bringing the two solitudes together. Assuming, of course, that this is their goal.

When they’re ready to stop blaming English Canada for the statements of its political fringe or for political divisions intentionally prompted by the Parti Québécois government, when they’re ready to stop playing the victim, and when they’re willing to bridge the divide between this country’s two language groups instead of building more walls between them and communicating via press releases and manifestos, I suspect they will find a more receptive partner.

And when those anglophones in Quebec and elsewhere for whom the Parti Québécois government can do no good are ready to stop demonizing that party, its leader and its followers, they too will find a more open mind on the other side.

Fear is caused by ignorance. And Ignorance is the real problem. Ignorance about Quebec, about the French language, about English Canada, about history, about basic human decency and about the facts.