Comparison of CHOM logos. On the left, the one in use since 2010. On the right, the new one just unveiled.

CHOM is undergoing a moderate transformation, which includes an updated logo, replacing the one it’s used since 2010, and a new website.

The new logo keeps the badge outline, but replaces the grey and orange design that went overkill on the gradients with a simpler black-and-white one that’s literally rougher around the edges.

But the formula isn’t being toyed with. CHOM remains “the spirit of rock” and the music will sound the same.

“We thought the logo was a bit dated even though it’s not that old,” program director André Lallier told me on Friday. “The timing was good also, because over the past two years, the music has evolved. We’re playing a lot of newer stuff.”

The new logo, and the ad campaign that goes with it, are the work of ad agency Bleublancrouge, whose clients include The Gazette. (It did their Words Matter campaign in 2006.)

Lallier said it was the agency that approached them about three months ago asking if they could pitch an idea. “They said we’ll work on something and present something to you in three to six weeks.” After giving the agency a full briefing on how CHOM sees itself and what it’s looking for, Bleublancrouge returned with this campaign, which is focused on CHOM’s music: a mix of classic rock and new rock.

One of the ads designed for the new CHOM campaign.

Lallier said they loved the idea. “It’s so tied in to what we’re doing,” he said, so they have decided to go through with the campaign, which is called “We’re in it for life.”

“It’s not a huge campaign with a lot of weight, but we’ll be everywhere,” said Chloé Boissonnault, senior director of communications and marketing for Bell Media.

It features a video ad, an audio ad, print ads and outdoor ads, including this design that I’m sure the agency is going to submit to as many ad awards organizations as it can: 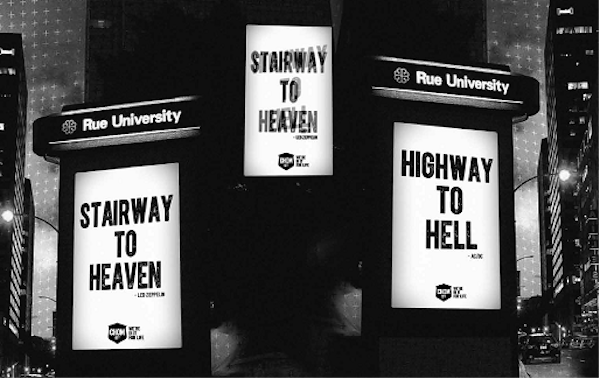 An outdoor ad shows “Stairway to Heaven” or “Highway to Hell” depending on viewing angle.

The 15-second video ad says “We dare you not to hear Mick Jagger,” then shows the lyrics to Satisfaction karaoke-style, with no audio.

Other examples I was sent include a poster at the airport (using Astral Out-of-Home advertising, of course) with the names of songs that evoke warmer places than here: Cheap Sunglasses, Tequila Sunrise, Blister in the Sun. Or a print ad that draws a timeline from “Born to run” through “Smells Like Teen Spirit” to “When I’m 64” and finally “Stairway to Heaven”.

I like that the campaign is focused on music, and treats the audience as if it knows music. But the campaign is based on familiarity with classic hits, and so misses the boat on two big things that CHOM says it’s about: new rock music and a focus on local artists. There’s no local focus in this campaign, and I don’t see too many songs from this millennium mentioned.

CHOM’s campaign, which begins today, will run until Dec. 31, but will probably come back in the spring “for another phase of the campaign,” Boissonnault said.

CJAD had its latest brand refresh last year, and so it’s not expected to make a big change in the short term. NRJ, Rouge FM and Virgin Radio are national brands. The first two, which have a network of stations in Quebec, undergo these ad campaigns every year. Boissonnault said work is being done in Toronto on a Virgin Radio brand refresh, expected to come in January or February.

UPDATE: CHOM has more from the campaign on its website.