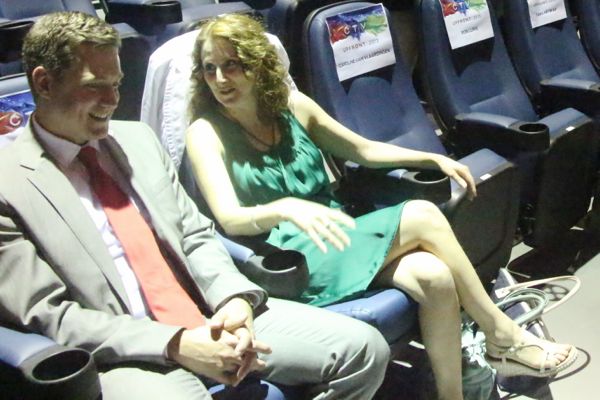 This not-so-great photo was taken the last time I saw Tarah Schwartz. It was June 13, at CTV Montreal’s “upfront” presentation of its fall programming to local advertisers. Most of the on-air talent was invited to attend so they could be shown off and shmooze with the people who have big bucks to spend.

It was an emotional time for Schwartz. She was going on leave, and within days was heading to South Korea to finalize the adoption of a young boy. Her colleagues all knew about what she was doing, but it was discussed in hushed tones, not because there was anything embarrassing about the adoption itself, but because nobody wanted to jinx the process by making it public. Schwartz, who had been trying to adopt for years, knew full well nothing was certain until she returned to Montreal with a baby in her arms.

As she left the theatre, everyone wished her luck. And my slow draw with the camera prevented me from getting a picture of her unable to hold back tears. (It was probably for the best.)

I spent part of the evening interviewing Caroline van Vlaardingen, who would fill in for Schwartz during her leave. Schwartz left without any fanfare, and the public started wondering where she disappeared to. (If you go on Google and type in her name, the first suggestion is “Tarah Schwartz leaving CTV”.) 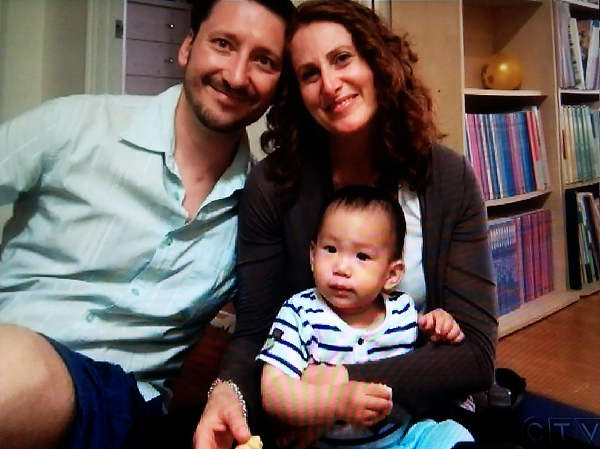 CTV Montreal newscast ends on Aug. 25 with a photo of Tarah Schwartz with husband Enrico and son Sam

Fortunately for everyone, the story has a very happy ending. On Aug. 25, the local newscast ended with the news that Tarah Schwartz and her husband Enrico are officially parents.

And as she enters the final month of her maternity leave, Schwartz opens up about the process in a first-person story published in Saturday’s Gazette. It hints at past heartbreak, it talks about the complicated legal process, and it explores the emotions that a would-be adoptive parent goes through, both before and after the adoption. It’s a story foremost about waiting, powerless, knowing that your child is out there, living precious moments of the beginning of his life with some other family. And about the feeling when that long agonizing wait is finally over.

It’s a story about becoming a mom. It is a story that is commonplace, but no less special.

Mazel tov, Tarah. It’s a boy! Now all you have to do is wait for a public daycare space to open up.

Schwartz will be back on the anchor desk on Feb. 8.

UPDATE (Jan. 15): A couple of letters to the editor about Schwartz’s story.

4 thoughts on “Tarah Schwartz opens up about her adoption journey”