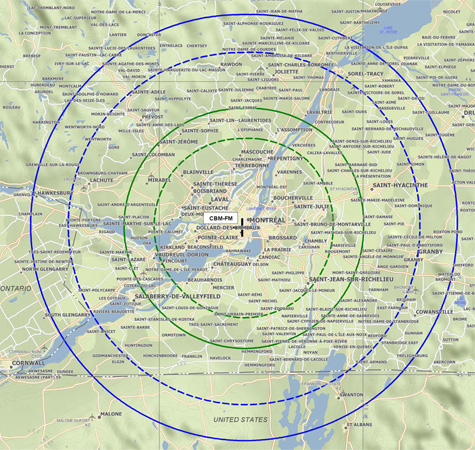 Following a similar successful application from Cogeco Diffusion for The Beat and 98.5 FM, the CBC is now also asking to take advantage of the lifting of a moratorium on power increases for Mount Royal transmitters so it can boost power to the maximum allowed for that class of station.

Just before Christmas, the CRTC published an application from the corporation to boost the power of CBM-FM 93.5, the transmitter for Radio Two in Montreal, from 24,600 watts to 100,000 watts.

The application is brief in providing a reasoning for the change. Under the justification section, it reads, in its entirety: “The proposed changes will improve the quality of the Radio 2 service in Montreal, QC”

As a Class C1 station, CBM-FM is protected up to its maximum power of 100,000 watts. The CBC’s technical report shows very little potential for interference, affecting the Rythme FM station in Sherbrooke on 93.7 in the area around Granby, and two U.S. stations at 93.3 and 93.7, just across the border.

The CBC Radio One transmitter (CBME-FM) at 88.5 FM, which was licensed after the Radio Two transmitter, is limited to its current 25,000 watt signal to avoid interference with other stations. But the four Astral FM stations — CHOM-FM, CJFM-FM (Virgin), CKMF-FM (NRJ) and CITE-FM (Rouge FM) are all at about 41,000 watts and could also apply to boost those signals.

The deadline to submit comments on the CBC Radio Two application is 8pm ET on Thursday. You can do so here. Remember that all information submitted, including contact information, becomes part of the public record.

UPDATE (June 2): The CRTC approved the application in May.