In what a lot of people said was a huge surprise (but was actually predicted by plenty), the end of the 700MHz wireless spectrum auction showed that Videotron bought licenses covering Canada’s four largest provinces, and everyone now assumes the company will go national, becoming that fourth big player that the government and unsatisfied Canadian cellphone customers have been hoping for.

Quebecor is forbidden by the spectrum auction rules from commenting on its future plans in order to preserve the integrity of the process and avoid collusion between bidders. So all we have from them is their press release on the subject. It includes these quotes from CEO Robert Dépatie:

“With the high-quality frequencies acquired in this auction, Videotron is now well-equipped to develop its network in the years to come and to continue offering its customers the best in wireless technology.”

“Given the way the auction unfolded, Quebecor Media could not pass up the opportunity to invest in licences of such great intrinsic value in the rest of Canada,” said Mr. Dépatie. “We now have a number of options available to us to maximize the value of our investment.”

Read into that what you will. 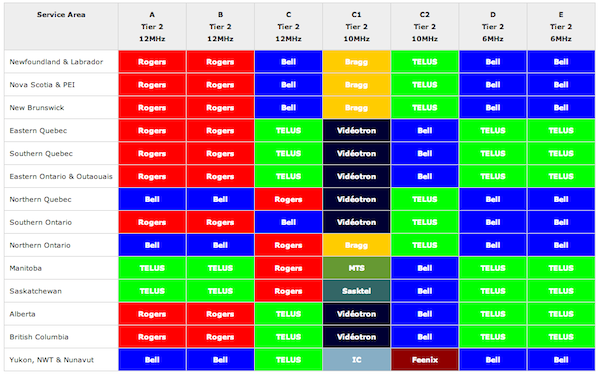 Table of wireless spectrum licences acquired, from Industry Canada. (Bragg owns Eastlink, and “IC” refers to a licence that was not sold)

Let’s put in some context here. The rules of the spectrum auction were set up so that the big three players were limited in what they could buy. These rules ensured that in all regions of the country (except the territories, where one licence is still available), there were four winners. Bell and Telus won licences across the country, and Rogers won everywhere but the territories (where it apparently wasn’t interested).

The fourth player is different across the country: Bragg (Eastlink) in Atlantic Canada and Northern Ontario, MTS in Manitoba and Sasktel in Saskatchewan, Feenix (owned by the executive chairman of Mobilicity) in the territories, and Videotron everywhere else. For the most part, this follows areas where companies offer Internet, television and home phone service. Eastlink is a major player in Atlantic Canada (and has small networks elsewhere in the country), MTS and Sasktel are formerly government-owned telecommunications companies, and Videotron is the big cable player in Quebec.

There’s no doubt that Videotron could become a national player. Its financial situation isn’t nearly as precarious as other new entrants like Wind and Mobilicity. Plus it could buy either or both of those companies for pretty cheap, since the government won’t let them be sold to the big three.

But while Videotron built its network in Quebec mainly by converting its existing cable and Internet customers, it won’t have that advantage in the rest of the country. So after spending hundreds of millions of dollars setting up networks covering three other huge provinces, it will have to start from scratch getting clients from bigger telecoms by offering modest discounts.

It would be an ambitious move, to say the least. And other than newspapers and the Sun News Network, Quebecor doesn’t have many assets outside of Quebec.

At least one analyst believes building a national network alone isn’t realistic, and I tend to agree. But there are plenty of other options available.

Right now all we can say is that Videotron has acquired 20-year licences for spectrum in Canada’s four most populous regions, and did so for a lot less money than its competitors. And it has a while to decide what it wants to do with it.

4 thoughts on “Could Videotron become a national wireless company? Maybe”