It was one of the great highlights of the Sochi Olympics: Down 2-0 with three and a half minutes remaining in the gold-medal game, Canada’s women’s hockey team mounts an improbable comeback, with a goal by Brianne Jenner and another with less than a minute left from Marie-Philip Poulin to send the game to overtime, where Poulin would strike again to make Canada the Olympic champion once again.

It was no Miracle On Ice. The Canada-U.S. final was given before the tournament even started, and Canada had won the gold in the three previous winter Olympics. But in terms of sheer excitement and the holy-crap-did-that-just-happen feeling, it was hard to beat.

Now, with the Olympics over, the male players return to their professional teams in the NHL, KHL or other leagues. The women, meanwhile, return to relative obscurity.

It’s unfortunate that while the NHL gets all the attention, the women’s hockey players that created such a spectacle at the Olympics get so little three years out of every four. The Canadiens sell out the Bell Centre for 41 games a year even though tickets cost $100 to $400 apiece, the concessions are wildly overpriced, the team is often mediocre and the players don’t speak French.

Meanwhile, at the Étienne Desmarteau arena, the Montreal Stars team of the Canadian Women’s Hockey League struggles to fill seats 12 games a year with $10 ticket prices, incredibly cheap food, players that are mostly from here and who always stay after games to give autographs to anyone who wants them.

And they’re also good. How good? Going into this weekend’s games, the Stars are riding a 20-game unbeaten streak in regulation. The only game they lost in 60 minutes was the season opener in Boston. Their record this season is a ridiculous 18-1-2, their record at home is a perfect 10-0-0, and they have more than twice as many goals for as goals against (91 vs. 40). All four of the top points leaders in the league play for this team. 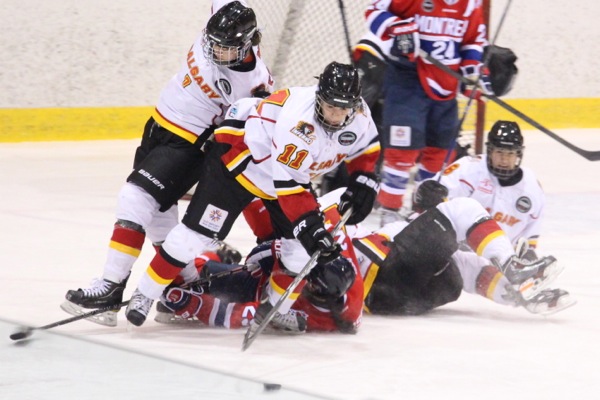 Calgary Inferno’s Jacquie Pierri handles the puck through a pileup during a game in Montreal on Dec. 14.

Of course, these teams don’t include the big stars like Poulin and Wickenheiser, who didn’t play this season so that they could train for the Olympics. Instead, we’re left with non-Olympians like Ann-Sophie Bettez, Sarah Vaillancourt and Vanessa Davidson.

And Montreal’s winning record has to be taken in the context that the CWHL only has five teams in it, unlike the NHL’s 30.

And women’s hockey in North America is far better than it used to be, as Caroline Ouellette and Charline Labonté explain to CBC, and also much better than in other countries, so much so that the International Olympic Committee has expressed concern that women’s hockey isn’t competitive enough internationally to be included in the games. (Of the five Olympics where it’s been played, four have seen a Canada vs. U.S. final, and the other one had Canada winning gold and the U.S. bronze. But the IOC indicated last month that removing women’s hockey is not something we should be worried about.)

I try to go to Stars home games when I can. (It’s not always easy, since I work weekends.) For $10 a game, it’s good hockey. And I’m always disappointed when I see hundreds of empty seats, and no journalists anywhere. The Canadiens dressing room after a game can have dozens of reporters crawling over each other to get the same dull quote from a player. Dozens more analysts and columnists follow the team and are paid to remark about every inconsequential move or controversial penalty or unscripted remark. 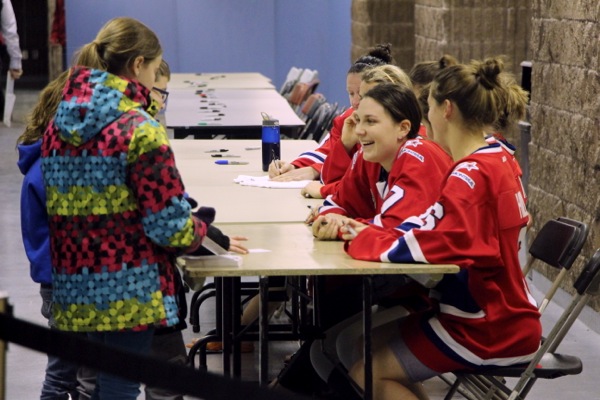 I’m not saying the two should be equal, but maybe the media could spare two or three of these journalists for 12 days a year to cover a team that would be only happy to give them as much access as they want?

I’ve tried a few times to convince people that this team needs more media coverage. I’ve tried to make the case that someone, some fresh-out-of-J-school kid who wants to make a name for him or herself as a sports reporter, should try to make a career (at least part-time) out of becoming that one journalist who covers the team.

But it doesn’t look like anyone’s biting. People who want to be sports journalists want to cover the Canadiens not because they like hockey or because they want to tell stories that no one else is telling, but because they’re Canadiens fans and they want to cheer from the press box. They’ve been brainwashed by that mix of peer pressure and expensive marketing that has convinced them that being the 37th most influential reporter covering an NHL team is better than being the only journalist covering anything else.

It’s sad. Because while the Canadiens have Habs TV and 24CH and a well-oiled PR machine to make sure everyone knows everything about the team, the Stars have plenty of stories that just aren’t told because nobody has asked them about it. 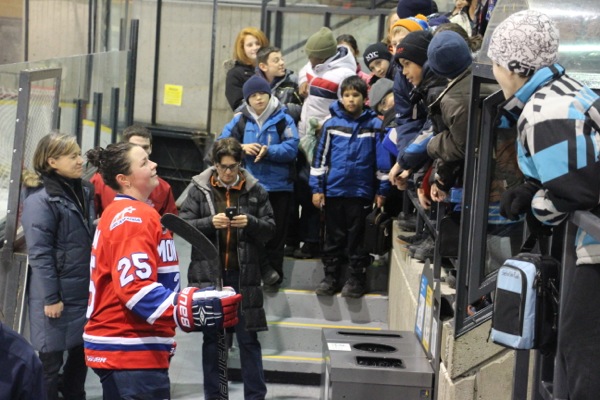 The Stars’ Vanessa Davidson chats after the game with some students from the school she teaches at who came to cheer for her at an afternoon game on Dec. 16. 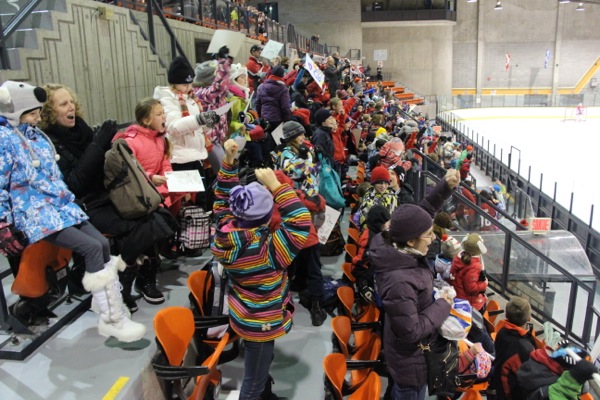 Vanessa Davidson’s fans (who refer to her as “Ms. D”) go nuts after she scores the go-ahead goal (and what would become the winning goal) in the second period on Dec. 16.

This weekend, the Montreal Stars play their final two games of the season, and their first home games since Canada’s gold-medal win. On Saturday at 5:30pm, the team holds a breast cancer fundraiser, donating 70% of profits for the cause. They’ve also welcomed several members of Canada’s gold-medal-winning team to the arena. Among them is Caroline Ouellette, the person for whom the ice surface they play on is now named.

Also there will be Julie Chu, who was captain of Team USA. (Hope she doesn’t hold a grudge.) Both Ouellette and Chu have been added to Montreal’s roster and will play their first CWHL games of the season. There will also be a charity auction of Olympic memorabilia.

On Sunday, at 1:30pm, the team holds its fan appreciation day, and will be giving out prizes.

So how about you take some time out of your afternoon, head to the Desmarteau arena (take the 197 bus from Rosemont or the 67 bus from Joliette), and for $10 a person enjoy some good hockey where you can really feel appreciated as a fan.

With some fan appreciation, some good will from the Habs-obsessed media, and gold-medal talent on the ice, the Stars can slowly improve to a situation where the excitement fans get from the team matches the passion that the players put into it, and we can have the best of both worlds: good hockey that doesn’t treat its fans like ATMs.

A team that’s talented but still accessible, popular but still cheap, mainstream but still cool. How can that be a bad thing? 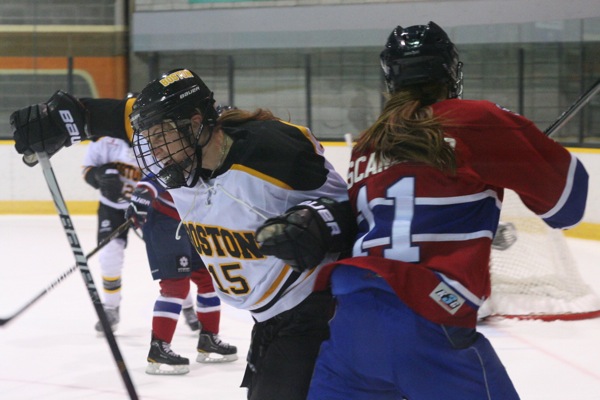 I take back everything I said about Montrealers not supporting women's hockey. This place is packed! pic.twitter.com/KVMEylxLQ5

The Caroline Ouellette arena at the Étienne Desmarteau complex has a capacity of 2,200, and many people who came couldn’t find seats. Including me.

Montreal won the match 4-2 after a couple of late goals from Boston, to improve their record to 19-1-2 going into Sunday’s game.

The autograph session lasted more than an hour, with Caroline Ouellette getting the most attention.