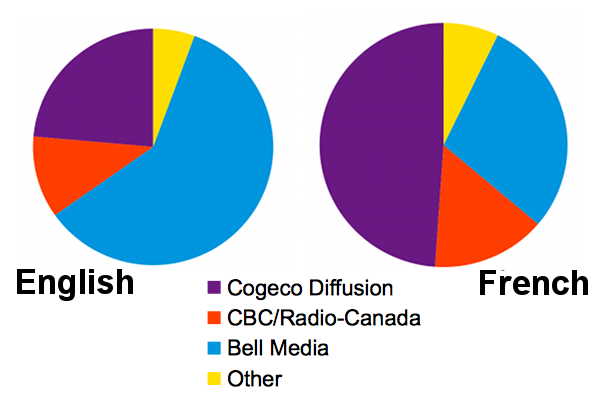 One year after The Beat took a surprising lead over Virgin among all anglophone listeners, it has done so again. The latest BBM quarterly ratings report, released last week, shows The Beat with an 18.4% share among anglophones, slightly less than its record 18.6% in March 2013. That’s ahead of Virgin Radio at 15.1%.

What’s interesting about this jump back to number one (well, actually number two, behind CJAD) for The Beat is that it happened during the same time of the year last year, suggesting that there may be some seasonal aspect to it. Maybe The Beat has better Christmas music?

“Could be a new seasonal thing, but we keep gaining in all demos through the various seasons,” The Beat’s program director Leo Da Estrela tells me. He pointed out that The Beat held its lead through the spring and summer (though just barely) and described The Beat’s fall 2013 as “weak”, suggesting that the report that came out in December was the exception rather than the rule.

We’ll see in three months whether he was right. (Oh who am I kidding, we’ll be arguing over this for years.)

Da Estrela also points out that The Beat is ahead during the 9-5 work day “which is our bread and butter.” 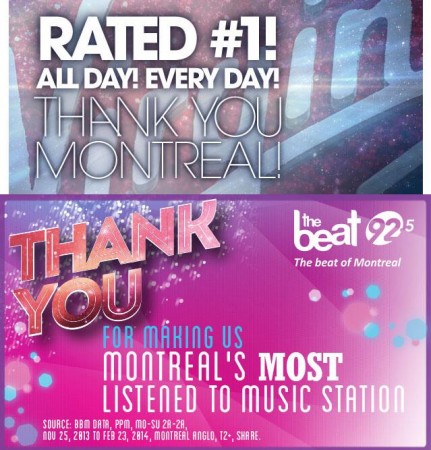 Like last time, Virgin is still ahead where it matters for advertisers: adults 25-54. But not by much. In that demo, Virgin’s lead has dropped from nine points to only three, according to this analysis by its owner Bell Media. Among women in that age group, its lead has gone from 11 points to five.

Breaking down by time period, Virgin has significant drops across the board. It has dropped to third, behind The Beat and CHOM, among adults 25-54 in the mid-mornings. That’s not good news for Andrea Collins, who’s in the Virgin studio for that timeslot. But she’s clearly not the problem because The Beat is also ahead during the noon hour, when it airs its 12 Hits @ 12, and in early afternoons, when Virgin has Ryan Seacrest and The Beat has CJ.

Virgin still leads in the mornings among 25-54, and The Beat is still fourth, though the race between the two is much tighter. It also leads in the afternoon drive time and on weekends, but not by as much as it used to.

Bell Media tried to put on a happy face about the ratings. Their highlights include:

The bottom line is the race between Virgin and The Beat is tight, but otherwise there hasn’t been much to report in this ratings period. Bell Media has more than half the market among anglophones (about 75% if you exclude non-commercial stations), and Cogeco has about half the market among francophones.

It had a slight loss among total listeners, but Andrew Carter still reigns supreme among anglophones with 32,000 listeners on average, and 10,900 in the 25-54 demographic. The next four shows on the list of top 40 are also CJAD shows, including Tommy Schnurmacher, who gained 11% and has 20,250 listeners on average.

In the 25-54 demo, Carter is followed by Mark Bergman on Virgin, The Beat’s 12 Hits @ 12, The Beat’s Middays with CJ, The Beat of your Workday with Donna Saker, Tootall on CHOM, and Ryan Seacrest on Virgin.

Among morning shows, which are no longer the top-rated shows at the music stations among either all listeners of the 25-54 demographic, The Beat is second behind CJAD in overall listeners, with 16,100, followed by Freeway and Natasha on Virgin with 12,870 and Terry DiMonte and Heather Backman on CHOM with 12,290. Among adults 25-54, it’s Virgin first, followed by CHOM and then The Beat.

Since the biggest gains are all on CJAD and biggest losses on Virgin, it seems obvious that it’s something about the station, not the personalities, that are at play here. It’ll take a few ratings periods to see if this is a momentary blip or a long-term problem.

Among the French stations, there’s been a bit more movement. Overall, CHMP 98.5 FM still leads, with 20.5% of the 2+ francophone audience (though it now claims to be only the most listened to radio station in Quebec, not all of Canada). But among adults 25-54, it has lost a five-point lead over Rythme FM and now trails in that demographic by a single point (which we’ll call a tie). The rest of the field is flat.

Among adults 18-34, Rythme FM has jumped from fourth to first with a 25% share, and 98.5 FM has dropped from third to fifth among young adults. The talk powerhouse is stable among women but has lost seven points in its key men 25-54 demo.

Rouge FM also loses a selling point in its war with Cogeco’s Rythme FM. Rouge has dropped behind it at noon, when it has Joël Legendre and Rythme has Sébastien Benoit and Mitsou Gélinas. This is due more to Rouge’s drop than Rythme’s gain. Legendre’s noon-hour show is stable among men but has lost 28% of its audience among women 25-54.

NRJ saw its morning show C’t’encore drôle plummet 36% among adults 25-54, though it’s still the highest rated of the morning shows on the music stations.

Among the rest, Radio X and Espace Musique are pretty flat everywhere. Radio Classique is flat overall but has lost more than half its audience in late mornings and at noon.

Radio-Canada Première had some significant losses across the schedule. C’est pas trop tôt with Marie-France Bazzo had a 20% drop from 55,500 to 44,500 listeners total (that’s less than half of Paul Arcand’s show on 98.5), though it’s actually up 3% in the adults 25-54 demographic.

31 thoughts on “Radio ratings: The Beat back above Virgin (but…)”