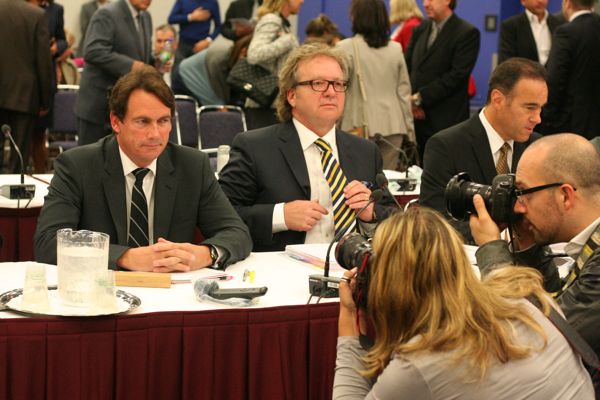 In the end, it was probably the most sensible decision. Pierre Karl Péladeau, who owns a controlling stake in Quebecor Inc. and its subsidiary Quebecor Media Inc., which became a problem when he became a candidate for the Parti Québécois, has agreed to sell his entire stake in the company to the Quebec government for an undisclosed price. The news was reported in this morning’s Journal de Montréal (of course).

The sale, which will effectively nationalize Quebecor Media, owner of the Journal de Montréal, Journal de Québec, Videotron, TVA and a bunch of other companies, will keep its control in Quebec. Keeping control here was the big reason why Quebecor bought Videotron and TVA in 2001.

It’s not clear exactly how the process would go through, whether it would be the Caisse de dépôt et placement du Québec, which already owns a significant share of Quebecor Media, buying the rest, or whether there would be some other branch of the provincial government created to run the company. Péladeau and PQ leader Pauline Marois said the deal would not affect senior executives or staff at Quebecor, and that Quebecor’s editorial independence would be assured. Marois left open the possibility that assets such as the newspapers or Videotron might be sold, but said there was no question that control of those assets would remain in Quebec.

Péladeau said the deal would go through regardless of who wins the April 7 election if he wins his seat. He didn’t say exactly what would happen if he’s not elected to the National Assembly. He also said he discussed the deal with Quebecor CEO Robert Depatie and Quebecor’s board.

Since Videotron and TVA are regulated by the CRTC, the deal would need to be approved by the regulator first. There might be other federal and provincial bodies having a say considering the unusualness of this deal.

The implications of this deal are a bit too out there to ponder right now, so I’ll let it digest before I analyze it further.