For three weeks after CBC President Hubert Lacroix announced cuts equivalent to 657 full-time positions at the public broadcaster, employees at the CBC Montreal office finally learned how those cuts would trickle down at the local level.

This week, I met with Shelagh Kinch, the Quebec regional director for English services, who laid it out for me: 10 positions are being “affected” by the cuts, and at this point it looks like five people will be leaving the CBC as a result.

I explain it all in this story, which appears in Saturday’s Gazette.

The changes break down as follows:

The departures will be staggered over the summer, as contracts end, notices are given and alternative jobs explored. But by September, the changes should have taken effect.

Kinch said she was comforted by how much the staff pulled together through this process. Departing employees were flooded with support from their colleagues.

“These people are so amazing. I feel very privileged to work with them,” Kinch said.

I asked her if there was anything else she could do budget-wise other than cutting staff.

“I have nothing,” she said. “I don’t own property here. What I have is staff.”

So now the next thing is to find out how to move forward. As I explain in the Gazette story, Kinch isn’t pretending that the cuts won’t mean a loss to services, or that CBC employees will be able to just do more to make up for the loss of their colleagues. Instead, they’ll have to decide what they can do and what they can no longer afford to do.

The next few weeks will involve discussing with employees how CBC Montreal can continue to provide content to the audience. One thing Kinch would like to see is more “integration”, which is the CBC’s version of Quebecor’s famous “convergence” — CBC reporters filing the same story for radio, online and TV in one day. Kinch said she realizes that not every reporter can do this for every story.

“We have to change the way we work. We can’t keep doing the same thing with less. It just doesn’t make any sense.”

One change that has already been decided takes Bernard St-Laurent out of the host chair of Radio Noon. Kinch said he’ll focus on his role as chief political analyst in Quebec, and Radio Noon will become “more of a call-in show”. (You might recall that five years ago Radio Noon was reduced from two hours to one hour a day.) 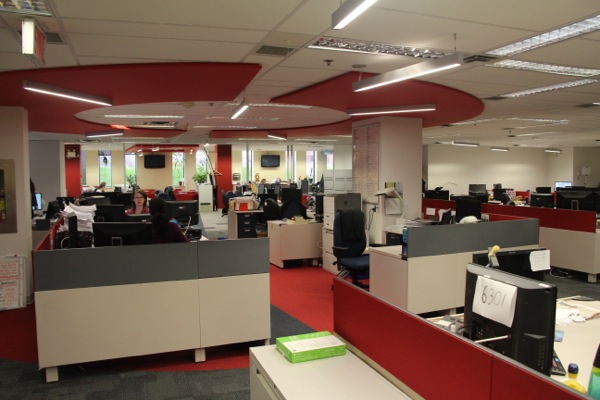 CBC Montreal’s office space, renovated just last fall to bring all English staff together, is centred around a hub to facilitate integration.

The cuts come just a few months after CBC Montreal renovated its newsroom in the basement of the Maison Radio-Canada. Those departments still operating on the ground floor were finally moved into this new space, which used to belong to Radio Canada International. The new design is open concept, allowing more natural light in, and doesn’t feature offices for managers. Instead, everyone, even Kinch, sits in cubicles.

It took some getting used to, Kinch admitted.

“I’ve been spending a lot of time looking for empty rooms,” she said. There are still conference rooms available of various sizes, and rooms with telephones and computer consoles so that people can hold conversations or edit radio pieces in peace.

Because he’s the only on-air personality getting the boot here, Pierre Landry gets to become the face of this. So it meant another awkward message asking for an interview.

Surprisingly, Landry took the news in stride. “I can’t control the situation,” he told me over the phone. “I was told that it had nothing to do with my personality or my work. You just take it as it comes.”

Landry started at CBC in the fall of 2005, about the same time I started at The Gazette. He’s been on contract ever since, renewing yearly, each time unsure if it would be his last.

Landry was the first to publicly announce he’d been cut. What followed, he said, was an “incredible wave of support” from colleagues and listeners. It reminded him that those people are out there. “We don’t see the people” listening to their radios, he said. “You kind of forget that there’s somebody out there listening. It feels good to know that people appreciated what I did.”

Landry’s contract ends at the end of June, but he won’t be leaving quite yet. He’s been tapped as a fill-in host on All in a Weekend through the summer, which should keep him around until Labour Day.

“Beyond that, I don’t know. I’ve been contacting a few people I know at Radio-Canada. I’d love to stay at the organization.” But, considering that everyone is making cuts, the chances of finding work elsewhere in the same building is much less than it used to be.

Being cut from a job you’ve had for almost a decade is certainly disappointing, and it adds stress when you’re a grownup with obligations. But “I always knew that this kind of thing could happen,” he said. “I took it like a man. It’s one of those things where you nod and you thank them. You can’t be angry at them because it’s not personal.”

Landry said that as a kid growing up in New Brunswick, “Radio-Canada was super important to us,” and he hopes that it continues to be so. “There are not many networks where you can listen to the same show in Vancouver and St. John’s.”

He also pointed out how, on his beat, he would “talk about artists that the private (radio stations) sometimes ignore.” Not that he’s putting down private radio, he said, but their mandates are different.

“I think there’s a lot to lose if CBC disappears.”

Landry’s promised to keep me updated on his future, and let me know when he has better news to share. 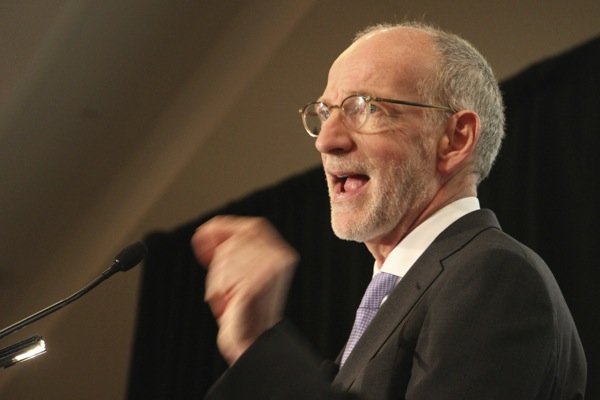 CBC CEO Hubert Lacroix launches a “national conversation” at a speech at the Canadian Club in Montreal on Monday.

A few hours after meeting Kinch at the CBC offices on Monday, I attended a speech by Hubert Lacroix, the president and CEO of the company. I covered the speech for Cartt.ca. His speaking notes for the speech are posted on CBC’s website. It talks about how important the public broadcaster is, but also says some tough decisions need to be made in consultation with Canadians.

Among them: Should the CBC continue to operate over-the-air digital television transmitters? In 2012, it went from having more than 600 TV transmitters across the country to having only 27, one for each of the CBC and Radio-Canada stations providing local content. Even though they’re only a few years old, the cost to operate them is significant for the few Canadians who get their television that way (a figure Lacroix said is estimated to drop to about 3% by 2020).

He also wondered aloud if the CBC should even have local television stations in Canada’s regions. From the way he said it, I think he thinks it should. His point is that the local TV model no longer works, and the private broadcasters will eventually start pulling TV stations off the air if nothing changes. When that happens, should the CBC be the last one standing?

Lacroix and the CBC have launched a survey to ask Canadians about their priorities. You can fill it out here.

Meanwhile, this week there were some high-profile voluntary departures from the CBC. Linden MacIntyre was the first to announce, saying he’s stepping aside to put a public face on these cuts and to save the job of a young journalist. Alison Smith, anchor of The World at Six, was next, followed by Nancy Wilson of CBC News Network.

On the French side, there was a “cri d’alarme” from the big personalities in news, whose appearance on Tout le monde en parle was broadcast the evening before Lacroix’s speech. Lacroix said he had no problem with their appearance, and agree with much of what they said, and said even if he didn’t he would never silence a CBC employee for having an opinion that is different from his.

Another thing about the CBC you don’t really see at private broadcasters.

Since then, Jian Ghomeshi took to the air on his Q show to make the case for public broadcasting. As It Happens is also going to devote a segment to the future of the CBC on Tuesday.

A white paper published by the group Amis de Radio-Canada is available here in French and English.

UPDATE (May 30): Today was both Andrew Chang’s and Pierre Landry’s last day in their current jobs at CBC Montreal. Both the TV newscast and Homerun paid homage to their departing colleagues.

And here’s Chang’s last half-hour at CBC Montreal. The career retrospective starts at 24:50.

UPDATE (June 13): Radio Noon devoted a special show on Friday to Sally Caudwell and Bernard St-Laurent on their last day. The audio from it is posted here.

The cat is out of the bag. I'm thrilled to announce that I am joining the on-air team at @CHOM977 starting Friday to do fill-in shifts!