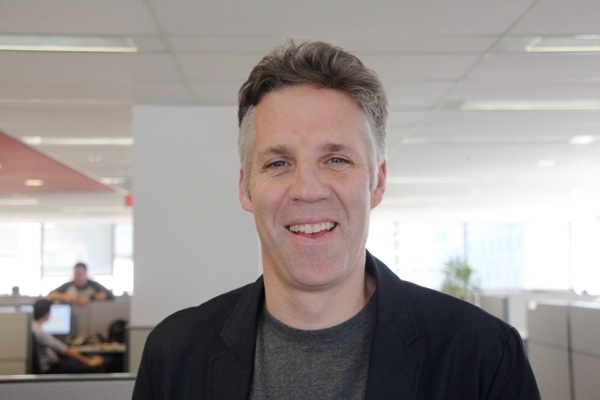 Babinski was hired in January 2013 by Scott Moore, who at the time was Rogers’s president of broadcast. Before Babinski’s hiring, Moore told me he wanted someone local for the job. The two knew each other because they had worked together previously at CBC Sports. Babinski was a sportscaster in Montreal until 2000, when CBC tried its dreadful “Canada Now” experiment. He left, and went on to freelance, producing Hockey Day in Canada content for CBC, and teaching broadcasting at Concordia University. (I was a student of his a decade ago for a class.) Moore is now managing Sportsnet and the NHL deal for Rogers, so the two will be working together again, though perhaps not so directly.

But while Babinski had a lot of experience producing television, managing a television station as something new for him. He said at the time that he was excited about the idea of building something like this from scratch.

Looking back, he’s happy how it turned out. “I’m extremely proud of the programming that we were able to build,” he said, and of the opportunity to build a TV station from the ground up and convince people like Alexandre Despatie to join. “I’ve never seen someone improve like he has in an on-air capacity,” Babinski said of the world champion competitive diver turned broadcaster.

He had good things to say about all six on-air personalities and how much they’ve grown over the past year. He said they’d become friends, and it was sad to leave them.

Schwartz echoed that, saying he was impressed by how close the team had become, and that he didn’t think Babinski had realized until Friday how much of an impact he had on the people there, both in front of and behind the camera.

Local TV ratings for the spring came out last month, and Babinski said on Tuesday that BT’s were disappointing and headed in the wrong direction, and he could only speculate as to why. He hinted that once the Montreal English market moves to an automated electronic meter system instead of a written diary-based system this fall, the numbers will be more accurate.

Schwartz was on the same page there as well. He said it’s a “blind comparison” because we can’t compare the ratings year-to-year. He also wasn’t too confident in the diary-based ratings system and is eager to see the Portable People Meter system introduced in the fall, which can give out overnight ratings and much more accurate numbers.

For Montreal Connected, the ratings were also disappointing, showing only 500 viewers in the latest BBM report. If that’s a true figure, it likely has more to do with lack of promotion and an unsexy 6:30pm Thursday timeslot (opposite the sports segment of CTV Montreal’s newscast) than anything else. And with NHL coming to City, there’s opportunity to fix that, by say having the show air Saturdays before the game. Decisions on changes haven’t been made yet.

Babinski is the second person out the door suddenly at City Montreal since it started airing local programming a year ago. In March, Rogers let go of Alyson Lozoff, the Sportsnet reporter in Montreal and co-host of weekly sports show Montreal Connected (and the only local on-air person at City Montreal whose hiring predates the station’s creation). Babinski and former co-host Wilder Weir told me they felt bad for Lozoff. The decision to let her go was made in Toronto. Her position remains unfilled.

In addition to Schwartz, Babinski’s announcement prompted tweets of support from BT and Montreal Connected personalities:

@BobBabinski @City_tv we love you Bob and we thank you!

Huge thank you to my boss, mentor & friend @BobBabinski on his new endeavours. He gave me a chance & helped me get where I am today. Cheers!

I have so much respect and admiration for @BobBabinski. Great boss, great teacher and amazing person. He'll be missed by all.

Here’s what Schwartz sent to in-house staff on Friday:

I’m writing to inform you that, Bob Babinski, Executive Producer & Local Content Manager for City Montreal has decided to leave Rogers to return to talent performance training and freelance producing.

From day one with the Montreal team, Bob has proven himself to be a passionate and driven team leader. He was instrumental in launching Breakfast Television and Montreal Connected, and played a key role in casting a solid and dynamic team of talent in front of the camera and behind the scenes. We are lucky to have had his expertise and experience during our start up phase.

Bob’s last day with us is Friday, June 13. Please join me in thanking Bob for his contributions to City Montreal, and in wishing him success with his future endeavors.

Thank you in advance for your support during this transition. I know the spirit of this team will continue to drive the excellence of the shows.