For the third year, CBC Montreal will be airing six one-hour documentaries produced by people in Quebec on Saturday nights at 7pm this summer.

Here’s what I can tell you about them:

It begins with 100% T-Shirt, a documentary on the T-shirt industry and culture. (It will be CBC Montreal’s second textile-based documentary in a year.)

As Absolutely Quebec series producer Carrie Haber explains in this story, the documentary looks at where T-shirts come from, how they’re sold, and who wears them and why. It includes interviews with stars like Sugar Sammy, Tegan and Sara, and American Apparel founder Dov Charney (whose position at the company has since changed dramatically).

A documentary on Quebec’s maple syrup industry, which as Haber explains, was inspired by a Daily Show with Jon Stewart piece last year about Quebec’s strategic maple syrup reserve, which was in turn came out of the great Quebec maple syrup heist of 2011-2012.

Originally supposed to air last year, this documentary about Claire Duchesneau, a social worker at the MUHC HIV clinic, was held over to this year after Duchesneau decided to travel to Rwanda, home of many of the refugees she worked with at the hospital.

Duchesneau is an amateur musician despite being very hard of hearing, and decided to record an album after learning she had cancer four years ago. “It’s a sad story, but she makes a funny protagonist,” Haber said.

The film is the subject of a story in The Gazette, another at CBC, and one on the MUHC website.

The documentary had a premiere and director Q&A on Tuesday, July 29 at 7pm at the Rialto Theatre. 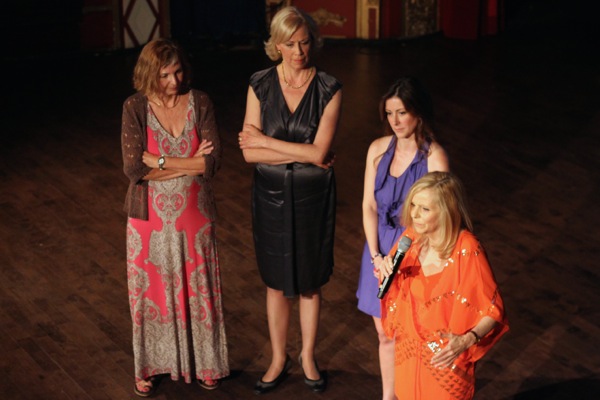 Film protagonist Claire, right, with filmmaker Anne Henderson, left, and other stars of the movie.

The series then takes a two-week break because of CBC TV commitments to air the Rogers Cup on Aug. 9 and the FIFA women’s U-20 World Cup on Aug. 16.

This bilingual 2013 NFB documentary by veteran Quebec filmmaker Alanis Obomsawin tells the story of Shannen’s Dream, a national campaign for First Nations education that was sparked by the efforts of a teenager from Attawapiskat in northern Ontario. Obomsawin follows others from that community as they head to the United Nations to make the case for fairness.

The Shannen’s Dream campaign eventually led to a mandate for equal funding for aboriginal education, and eventually the First Nations Education Act, which was killed after a rebellion among First Nations leaders against the legislation that led to the resignation of Shawn Atleo as head of the Assembly of First Nations.

The film, which premiered at last year’s Toronto International Film Festival and at RIDM, was nominated for best feature-length documentary at this year’s Canadian Screen Awards.

It is also screening as part of the Montreal First Peoples Festival on Aug. 5.

This documentary is on Brazilian, Argentine, Spanish and Italian culture during the World Cup that just ended. “It’s really just a soccer-flavoured look at these communities,” Haber explained. This one-hour show in four acts (one for each community) is adapted from a series produced for the Bell Local community television service. The documentary is still being worked on, but a final cut is due Aug. 15. Haber said this was taking a chance on a first-time filmmaker, but she’s optimistic her risk will be rewarded.

Originally produced for Radio-Canada in 2012, and nominated for two Gémeaux awards, this documentary explains the story of “a long-lost Canadian war icon”, a Canadian comic-book hero popular in Europe but virtually unknown here.

Unlike in previous years, it doesn’t look like these documentaries will get more than one airing on their debut weekend. But they will be available to watch online after they air, and some will likely get encore airings on CBC Montreal over the coming year and/or nationally as part of the Absolutely Canadian series.

Meanwhile, an Absolutely Quebec documentary from last year, Legends of Magdalen, will get a national audience when it airs on CBC TV at noon on July 26. The well-produced documentary about searching for sunken ships near the Magdalen Islands was the highlight of last year’s crop. You can watch it online here.