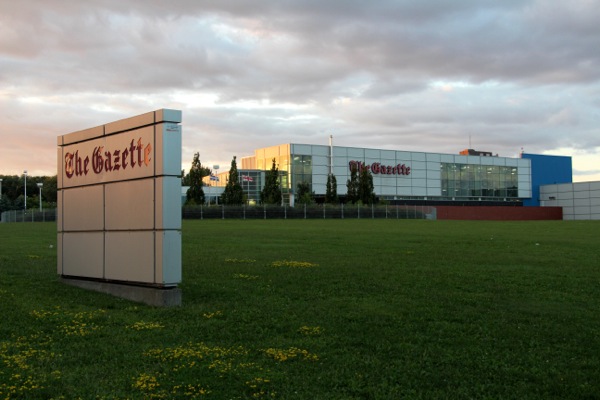 The Gazette printing plant on St-Jacques St. will be decommissioned and the land sold.

Things are changing at my employer this fall. I can’t spill all the beans, partly because as an employee I’m given some information that’s not meant for public consumption, and partly because there’s a lot of details I just don’t know. But here’s some stuff that has either already been reported publicly or that I’ve gotten permission to share:

The biggest change will be a relaunch of The Gazette on four platforms — print, web, tablet and smartphone. Each will have its own design, content and strategy. No date has been set for the relaunch, but it should happen some time this fall.

For an idea of what it will look like, you can look at the Ottawa Citizen, which went through a similar relaunch and redesign in May. The Gazette’s will be very similar. The Calgary Herald will be the next paper to go through the process, followed by all the other Postmedia papers (except the Vancouver Province and the National Post).

Rather than present the same stories written in the same way on all platforms, the redesigned environment will see stories done differently for the different platforms. Smartphone users will get short stories and breaking news. Tablet users will get a more magazine-like experience (with one edition a day coming out in the afternoon). Print users will get a design-y paper that’s more visually interesting and presents news in context. And website users will … uhh, I’ll throw in some buzz words here later.

The new four-platform strategy will mean lots of people getting new jobs (including myself). Each platform has been assigned an “executive producer” manager and a “champion” team leader:

In turn, these groups have also recruited teams to support them. I’ve been told I’ve been recruited to the smartphone team. But I don’t know what that means yet.

There are also other staff changes taking place, some of which are related to this and others not:

Most of these changes take effect in September.

Stop me if you’ve heard this one before, but there are fewer people working for The Gazette than there used to be.

On the editorial side, there have been a few departures since the beginning of the year mainly thanks to buyouts. They were staggered rather than all at once, which made it kind of low-key overall.

Those who left the paper are:

At his request, Jan Ravensbergen was escorted from The Gazette by security, fulfilling a life dream. We'll miss you! pic.twitter.com/R1itp3AUcz

Not all the departures are quite so career-ending. Riley Sparks, who started as a reporter intern a year ago and was kept on contract, filling in at the West Island bureau, has accepted a job at the Toronto Star. His last day was Friday. 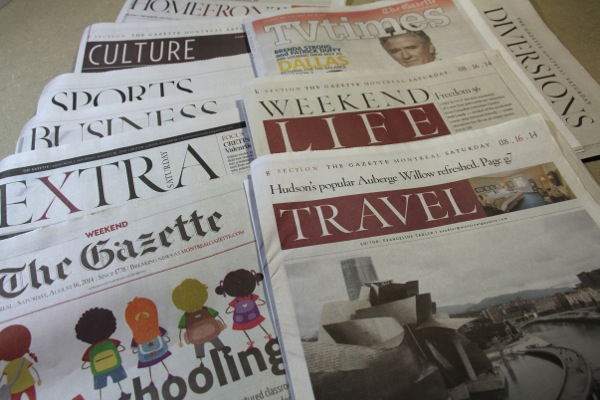 The Gazette will see some physical changes as it moves to a new printer on Monday.

As reported in May, The Gazette has decided to shut down its printing press and outsource the printing of the paper to Transcontinental. The switch happens this weekend. Saturday’s paper was the last printed at the Gazette plant on St-Jacques St. W. Monday’s will be printed from the Transmag facility in Anjou.

The change will result in 54 full-time and about 61 part-time or casual plant employees losing their jobs. The plant itself will be decommissioned and the land sold, Editor-in-Chief Lucinda Chodan explains in a note to readers in Saturday’s paper.

There will also be changes to the print paper that readers will notice. The biggest one is new sectioning. While most weekday papers have two sections, starting Monday they will have three or four, which should help satisfy those who complained that they can’t split the paper easily among members of a family. Some sections will still be combined on some days, but it won’t be as bad as it is now. (The order of sections will also change by the day, which will take some getting used to. Business will come after Sports on most weekdays.)

Another change is colour on every page. No more black-and-white photos (unless the photos themselves are in black and white). 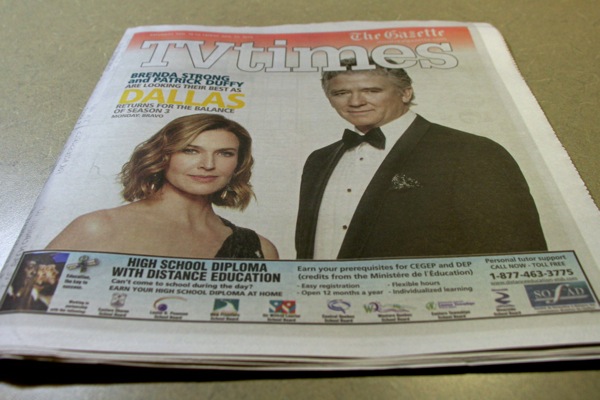 This is the last TVtimes in this format. Next Saturday, it gets a makeover.

TVtimes becomes opt-in for a fee

Also coming with the print outsourcing is a major overhaul of the TVtimes insert in the Saturday paper. As advancements in technology have given us set-top box program guides, online schedules and an explosion of channels, the use of a weekly TV guide has greatly diminished for many. (85% of Videotron TV subscribers and 100% of Bell satellite and Bell Fibe subscribers have on-screen program guides now.) For many readers, including myself, the TVtimes is a useless insert that gets thrown in the recycling bin without being read. TV Guide Canada no longer exists.

On the other hand, for some readers, the TVtimes is indispensable. And like the crosswords or comics, you just don’t mess with it.

So The Gazette will be separating it from the paper, in a sense. It’s going to get a “makeover”, which will see it in a new format with more content and highlights. Those who want it will get charged an extra $3.25 a month. Those who don’t won’t have to throw it in the bin every week, unless they buy their Saturday paper at a store, where the TVtimes will be included.

All Gazette readers will be given free samples of the new TVtimes in the Aug. 23, Aug. 30 and Sept. 6 papers before being asked to pay up.

UPDATE: You can get information on the new TVtimes here, and a sample PDF of what it looks like here. It’s more TV-Guide-sized, includes some TV stories and some puzzles, primetime and weekend grids, weekday and overnight listings, and best bets and best movies for each day. The sample is 64 pages long.

There are probably some things I missed, and definitely other changes still to come. But that’s a rundown of the basics.

It might be a depressing time to work in print media. But it’s also one of the craziest. And I remain grateful for that weekly paycheque.

And before you start filling the comment section with gratuitous insults toward my employer, I would ask that you re-read this post I wrote last year. 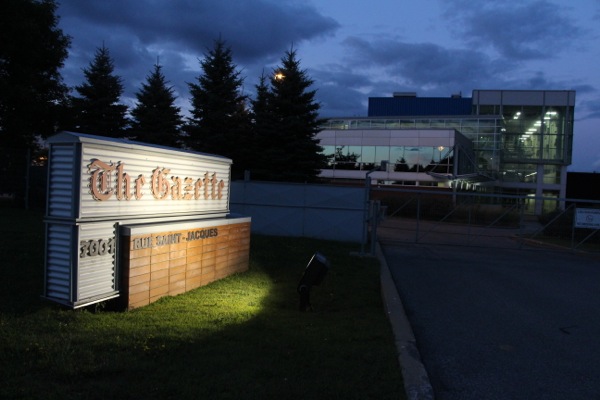 23 thoughts on “Changes at The Gazette this fall”