The last regulatory hurdle to the Montreal area getting its newest commercial radio company has finally been passed. On Thursday, the CRTC approved a technical change for CHSV-FM Hudson/St-Lazare, a new English-language music station first approved two years ago.

As a result, it and a sister station, Radio Fierté (approved in 2011), will launch by the end of 2014, owner Evanov Communications says. 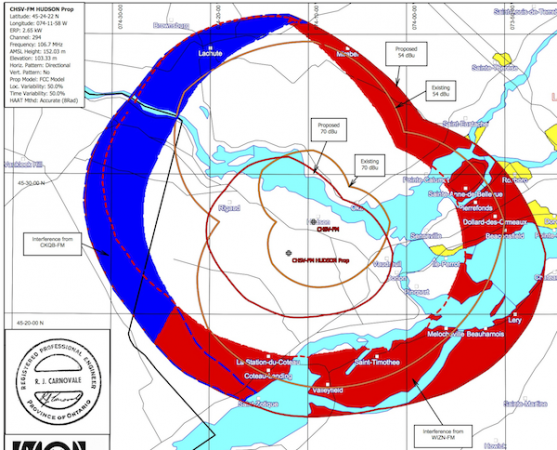 Evanov (through its subsidiary Dufferin Communications) had applied for the change to CHSV-FM because the Bell tower it had planned to use in Hudson had run out of space and would have required expensive upgrades to support another antenna.

So Evanov proposed to move to a Rogers-owned tower on Chemin Sainte-Angélique near Rue des Liserons, about 5.3 kilometres southwest of the Bell tower. In order to still cover Hudson, the change also meant a power increase, from 500W to 1420W average ERP.

Some competitors, such as CJVD Vaudreuil (a French-language station which serves the same region and wanted to use CHSV’s frequency) and Groupe CHCR (which owns CKIN-FM 106.3 in Montreal and was worried about interference), objected to this change as deviating from what was originally approved.

But the CRTC didn’t buy those objections. While the new pattern is significantly stronger toward the west and southwest, it is about the same toward Montreal, and so can’t be seen as some back-door way into getting into the Montreal market. And the situation that led to the application, and the proposed solution to it, are perfectly reasonable.

In its application, Evanov said the station, which will carry easy-listening music and the Jewel brand used at six other stations in Ontario and another in Winnipeg, would be ready to launch “within weeks of approval as all our other infrastructure and equipment are in place.”

Carmela Laurignano, vice-president and radio group manager for Evanov, said they won’t waste any time now. “It is our intention to get started on making preparations next week. It will require us to schedule installation of the transmitter, going through a testing phase to satisfy all requirements by Industry Canada and then sign-on air. We expect to be signed on by Christmas!”

When it does go on the air, for testing and then at launch, The Jewel in Hudson will cover the western off-island area, Ile Perrot, areas on the north shore around Oka, and the extreme West Island. Areas further than that may be able to pick up the station, but may experience interference from WIZN (The Wizard) from Burlington, Vt., or CKQB-FM (Jump) in Ottawa. Reception from downtown Montreal or points east of there will be very difficult because of interference from both WIZN and the Boom FM station at 106.5 in St-Hyacinthe.

Evanov is also the licensee of Radio Fierté, a new French-language AM station serving Montreal’s LGBT community. The station was approved in 2011 on TSN Radio’s former frequency of 990 AM. Last December, the CRTC approved a technical change for that station, moving it to 980 AM and allowing it to have a less restrictive pattern at night.

Radio Fierté has proposed a mixed music and talk format. It’s based on Proud FM (CIRR-FM), an English-language station in downtown Toronto. Because Fierté is on AM, it will likely be more focused on talk.

Though they operate in different languages, in different cities, and have different formats, Radio Fierté and The Jewel will share overhead, including management. So this CRTC decision allows Evanov to move forward on both stations.

Laurignano said Radio Fierté should be on the air by mid-November.