Tuesday night was the first time most people in the Montreal area got to see the new TV series Mohawk Girls, a “dramedy” produced by Tracey Deer that is set and produced in Kahnawake and airs on OMNI and APTN.

The series has been a long time in the making, and the first season was actually shot two years ago. It got a good deal of attention when it was being produced then, and even more so now that it’s actually on the air.

I watched the first two episodes as they aired on APTN tonight, both as an amateur TV critic and as a regular TV viewer interested in good storytelling. I’m not an expert on Mohawk culture, nor am I an expert on television production, but I’ll offer some thoughts of how I personally see the series so far. 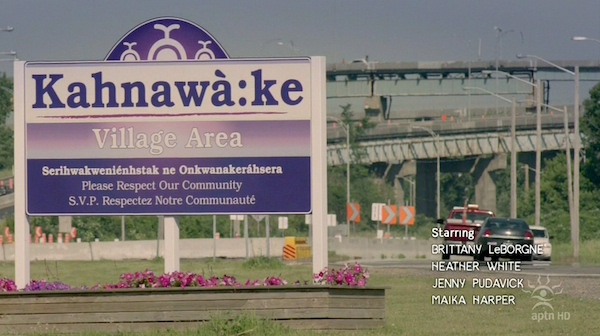 The setting: Unlike many Canadian TV series that try to make where they’re set as generic as possible, Mohawk Girls makes it clear that it takes place in Kahnawake, the reserve across the river from Montreal. And the overriding theme of the series is life on the reserve. While it might feel like any other Native reserve in Canada, it definitely can’t stand in for New York City or Anytown, U.S.A. In other series, the workplace is a cubicle office. In Mohawk Girls, it’s a cigarette factory.

The issues: How can you successfully date when you have to restrict yourself to a community of just a few thousand people, and half of them are related to you in some way? This isn’t some made-up gimmick to sell a bad sitcom, it’s an actual issue that actual people deal with, but one that we haven’t seen much on TV lately (or ever). And it’s one that can be mined for both drama and laughs. There’s a lot of potential to talk about things affecting Mohawk communities in a way that doesn’t sound like a sociology class. And Mohawk Girls is exploiting that well.

The technical quality: The length of the credits alone tells me that this is a professional series, and that’s backed up by watching it. It has nice visuals, good editing, good sound quality. It’s not a high bar, admittedly, but it could have been much worse. 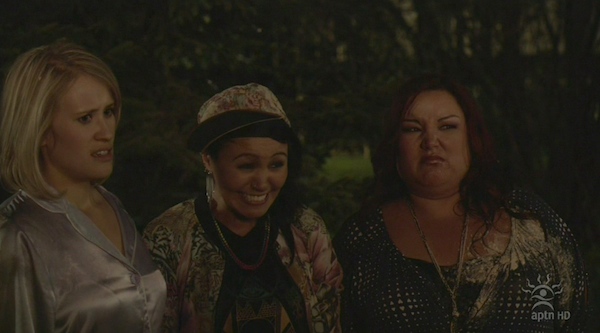 The acting: I want to cut this series some slack, because it’s new, and because some of the principal actors are from Kahnawake. But comedy doesn’t work when we can tell someone is expecting a laugh, and drama doesn’t work when we can tell someone doesn’t really feel the emotion they’re trying to convey. And in this series it’s hit-and-miss. Winnipeg’s Jenny Pudavick is believable as Bailey, who finds out in the first episode that she’s dating her second cousin. But the other actors have a tendency to overact, and while that sometimes works to comedic effect, when there’s no joke involved overacting is just that. Hopefully as the characters get fleshed out and the actors more comfortable, this will get better. But it’s hard to get hooked on a series when it looks more like a series of lines being spouted out on cue than an actual scene where something happens.

The writing: Mohawk Girls is at its best when it’s talking about issues both profound (preserving culture) and trivial (no street signs) that affect the community. But when it gets to more universal aspects of human behaviour, like flirting with a love interest, the plot and dialogue seem frustratingly unrealistic at times. Some secondary characters are one-dimensional, acting like douchebags in a way that actual douchebags don’t even behave. There’s a lot of subtlety to human behaviour that’s missing here.

It’s never a good sign when “acting” and “writing” are on the list of cons, but I still think the pros win out here, and I expect the cons will improve. How successful this series will be will depend on how much they improve.

We haven’t gotten into anything really dramatic yet, but there are enough hints laying around that this is coming soon. My overall opinion of the series will be shaped in large part based on how it deals with those kinds of moments.

Mohawk Girls airs at 9pm Sundays on OMNI 1, and 9pm Tuesdays on APTN, repeating at 1am Wednesdays and 9pm Sundays. There’s also a companion web series called Rez Chick which looks like it could be interesting.

You can watch Mohawk Girls online on APTN’s website.

7 thoughts on “A white guy’s review of Mohawk Girls”