When Global announced last month that there would be yet more centralization of local programming in eastern Canada, I didn’t exactly have my hopes up. They promised the centralization of resources would only affect non-local stories, and that the amount of actual local stuff would remain the same or even improve.

This week was the first under the new system for Global Montreal Morning News. And my analysis of the episodes that have aired so far suggest that Global has not lived up to that promise.

Not only that, but the melding of local and national elements creates this confusing mess of different on-camera personalities that is no better than someone switching channels at every commercial break.

Two shows in one 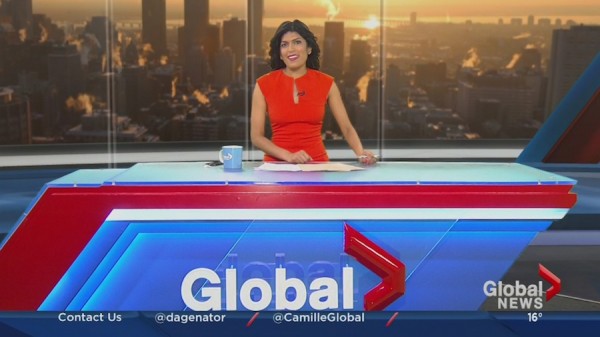 Co-host? What co-host? (Please pay no attention to that Twitter handle in the ticker) 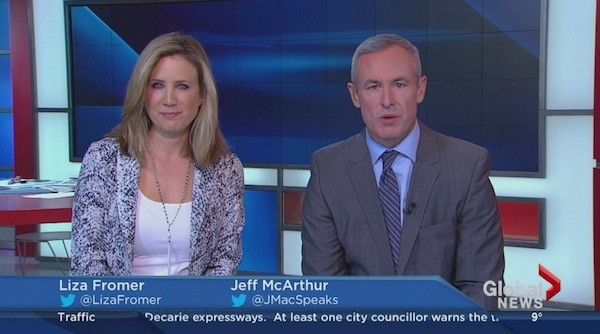 That national segment, which is about seven minutes (we were told eight last month) is the new part. The local show is essentially replaced by Global Toronto’s morning show with Jeff McArthur and Liza Fromer (McArthur alone until 7am), which tries not to be too Toronto-centric during that block.

But rather than just be a presentation of national news, the Toronto Morning Show also features interviews and host banter. Combined with the local show, which still features interview segments (but not nearly as many) and we’re left with a Frankenstein’s monster of segments that can be from five or six sets in two studios in two cities. The anchors of the two shows never communicate with each other, so there’s no flow between them. It’s like the Morning News has been fractured into 18 shows, of which 12 are local and six are from Toronto.

What’s worse is the quality of the national programming. The packaged reports are fine, since they’re the same things you’ll find on Global National or the Toronto News Hour the night before. But the banter between the hosts is a cringe-worthy display of uninformed opinions on the news, filled with “I don’t know”s and “I’m not sure”s and basing their opinions on sweeping generalizations instead of the facts. Rather than take 30 seconds to research a subject on Google before talking about it, the hosts prefer to waste our time making assumptions or talking out of their asses.

In fact, it took only until Day 3 for McArthur to prompt a shitstorm on Twitter for suggesting during one of these uninformed banter segments that a female comedian who was sexually harassed while on stage had “agreed to” derogatory comments because it’s part of the job and she has to “prepare for that”, and suggesting she was ridiculing audience members’ appearance based on absolutely no evidence that she had done so.

It was not my intention to offend anyone. @GlobalnewsTO @morningshowto & I don’t support victim blaming

Half Montreal, half Toronto 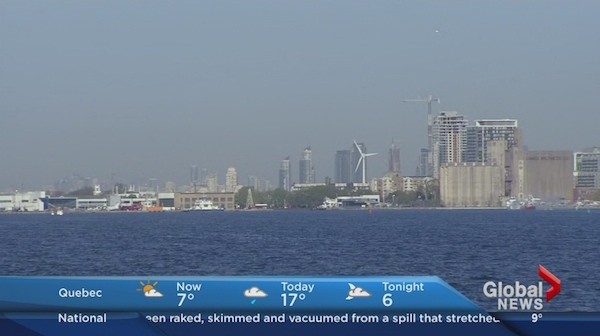 A skyline of not-Montreal opens one of the national segments.

Based on the first three episodes of Morning News, the amount of local programming has demonstrably decreased. There are only three local interview segments through the three hours, with the other before-the-half-hour blocks filled with “health news” or other packaged reports from national or local newscasts.

This is a marked decrease from the last few weeks of the old program, which had four to six local interview segments, some of which ran much longer than four minutes. There have been no musical guests on the show, partly because musical guests was a Richard Dagenais thing and partly because with the interview and performance the segment would go on for eight to 10 minutes and there’s just not enough time for that anymore under the new format.

In all, each half hour block has about 15 minutes of local content (and most of that is news, weather and traffic), eight minutes of national content and seven minutes of commercials. The union representing Global Montreal employees said it would look at the new morning show with a stopwatch in hand, and that’s what they’ll find in their analysis unless changes are made quickly. 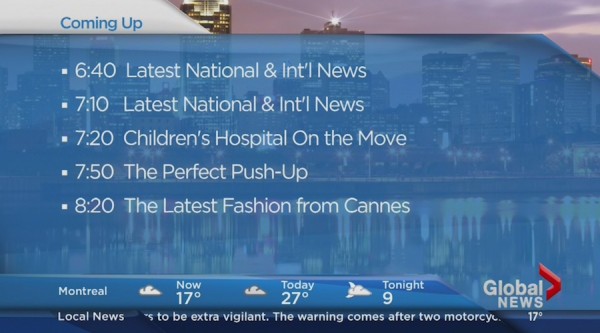 With Richard Dagenais gone, and the show losing a control room director and an associate producer, what’s left of the local segments aren’t as horrible as you’d expect them to be. Camille Ross still does well as a news anchor and interviewer, and Jessica Laventure is still warm and fun as the weather presenter. Technical errors seem to have crept up again, but they’re not as horrible as they were when Morning News first started.

But the dynamic between Ross and Laventure isn’t what it was between Ross and Dagenais. Instead, they perform their functions and hand the show back to each other. It’s not that they’re not friendly, it’s just that they have too much to do and no spare time to chat. Maybe they’ll find some way to get some interaction back into the show, but at this point it looks like the only how-was-your-day discussion we get is the stuff that’s piped in from Toronto.

No big goodbye for Dagenais

People who saw only Camille Ross on the anchor desk this week might have wondered what happened to Richard Dagenais. His last show was last Friday, and he didn’t use that opportunity to say any on-air goodbye. The show ended with a simple end-of-show wave from the co-host. 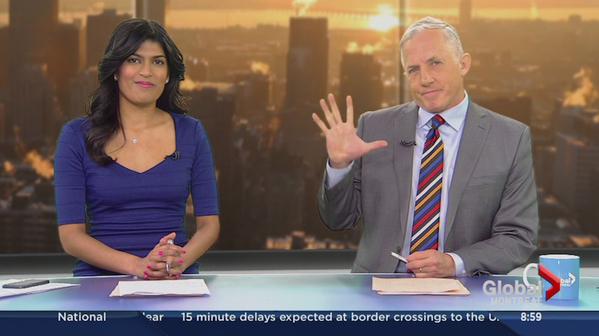 Richard Dagenais waves to the viewers one last time on May 15.

He explained a bit later in a Twitter conversation.

@fagstein gotta say – I barely got through the standard see-you-Monday wave! Anything more Steve – and I would have lost it.

So now he’s a free agent. Here’s his demo reel in case you have a job opening:

UPDATE: Dagenais has opened up a bit on his blog, and describes the day he was told he was losing his job:

It was Thursday April 9th and as I sat editing an interview for our “best of the week” show, my boss asked to see me in her office. She told me my job had been cut. Her words pelted my forehead like searing acid, burning their way into my brain and slowly sinking downward to my heart.

Like anyone who is the victim of job cuts, you wonder how, in the end, all your contributions can be worth so little. The pouring of dedication, energy, creativity, vision, talent, discretion, health, determination and so many other qualities, amount to nothing more than a perfunctory severance payment.

I’ve had my jobs cut before but this show, project and work meant more to me. I can honestly say I never took the hosting position for granted and I had said to Camille many times what a thrill it always was to hear my name announced as each new half hour of the show opened! Having my name attached to a show was an exciting first for me!

Global Toronto has shuffled its on-air lineup after its previous evening news anchor resigned. Though it’s not specified in the press release, Shaw Media confirms to me that the anchors named to the 11pm and weekend newscasts will be the ones who will do those newscasts for Montreal and other markets that are getting local news outsourced.

Anchoring the 11pm newscast, which will be expanding to an hour, are Crystal Goomansingh and Antony Robart, both veterans of Global Toronto. Anchoring the weekend newscasts will be Kris Reyes, who some Montrealers may have seen on the national version of The Morning Show at 9am.

Changes to the late and weekend newscasts are expected to take place by fall.

26 thoughts on “Review: New Global Morning News is a mess of disconnected hosts”