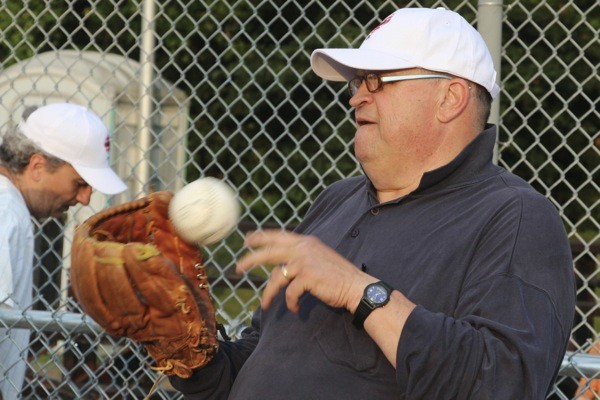 CBC doesn’t usually send press releases about the retirement of its journalists. But Bernard St-Laurent isn’t a simple journalist. The senior political analyst announced today he’s finally hanging up the microphone after 40 years in the business. His last day is June 26.

St-Laurent has a long career as a broadcaster, not only hosting local radio shows like Radio Noon and Homerun and the national program C’est la vie, but guest hosting on just about every national radio show and contributing in various ways to CBC.

Though in his later years his standing as a broadcaster seemed to wane a bit, and he always sounded on air as if he was out of breath, his colleagues are remembering him today as a mentor, a friend, and a wealth of institutional knowledge about Quebec. 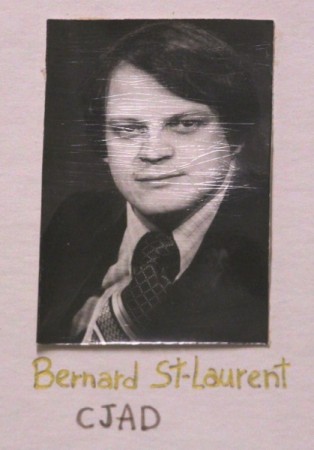 Bernard St-Laurent in a 1978 class photo at the parliamentary press gallery in Quebec City.

St-Laurent was also on CBC News, doing his job talking about provincial by-elections and then commiserated briefly about missing his colleagues and listeners.

Monday, June 8, 2015?­ — After 40 years as a veteran journalist and broadcaster, Bernard St-Laurent or Bernie, as he is known to many of his listeners, announced his retirement today from CBC. His last day on the air will be June 26.

Bernie was first introduced to the world of politics and journalism when he was a young boy in Compton, Quebec. His great uncle was Louis St-Laurent, then Prime Minister of Canada. When Uncle Louis visited the family general store reporters would always follow him around. That experience, along with talk of politics around the kitchen table, would set the stage for Bernie’s lifelong passion.

“Bernie is synonymous with CBC Quebec. “He is part of the texture of this place,” said Shelagh Kinch, Managing Director, CBC Quebec. “Over the years, Bernie has guided our audience through some of this province’s most intense and memorable moments. We will miss his exceptional journalism, his deep political knowledge and his extensive understanding of how this province works.”

Bernie has told the story of every political event in Quebec. From the 1984 Denis Lortie shooting in the National Assembly and the 1995 referendum to his coverage of the passing of former Premier Jacques Parizeau, listeners could always count on Bernie to get to the heart of what mattered. Since joining CBC, he has worked as news assignment editor, producer, national reporter and host of CBC Radio’s Homerun and Radio Noon. More recently, he was CBC’s senior political analyst in Quebec.

In 1998, he co-created C’est la vie, an award-winning CBC Radio program about life in French-speaking Canada. After more than 17 years, C’est la vie is still as immensely popular as it was on day one, with a loyal following across the country. In 2012, Bernie received the Award of Excellence from the Commissioner of Official Languages.

“With his warmth, sense of humour and intellect, Bernie has the ability to connect with everyone,” says Cindy Witten, Interim Executive Director of Radio and Audio. “We learned so much about Quebec in English Canada because of Bernie. He is an extraordinary talent and will be sorely missed on the airwaves.”

Over the years, Bernie has also guest hosted various CBC Radio programs including The Current, Sounds Like Canada, As It Happens, The House and Cross Country Check-up and contributed to a number of Radio-Canada radio and television programs.

Prior to joining CBC, Bernie worked as a cub reporter at the Sherbrooke Record and was a founding member of the group that started the Townships Sun. In 1974, Bernie co-founded Spec, a weekly paper for the English-speaking communities of the Gaspé that is still enjoyed today. He then went on to Quebec City and the National Assembly Press gallery. Bernie was elected Press Gallery president in 1986. He also worked as a reporter for CJAD, columnist for the Montreal Daily News and the Gazette.

A brilliant journalist w infinite knowledge. So grateful to have worked w the best storyteller around @B_STLAURENT http://t.co/ofZ6fgknfg

Going to miss @B_STLAURENT a lot. Endless font of journalistic wisdom: from interviewing to writing and broadcast delivery.

Can't imagine this place without @B_STLAURENT – knowledge of QC politics is a mile wide AND a mile deep. Happy retirement

Still absorbing news @B_STLAURENT is retiring. So happy for him but will miss him so much. A mentor like no other. http://t.co/VsbHfNcMpd

So honoured to have been able to work with and learn from @B_STLAURENT – he is a legend, a journalistic icon https://t.co/Ei15X987dx

Learned more from @B_STLAURENT in 1 day than 4 years of school. Earsplitting 'whoop' after booking a big guest & wearing 3 pairs of glasses.

A tip of the cap to @B_STLAURENT So many good stories. On- and off-air! http://t.co/bU97AgjHsf

…hard to sum up in words just how much @B_STLAURENT means to @CBCMontreal. A leader, in so many ways. Thanks, #bernie

On @cbcHomerun @B_STLAURENT gave me great script-writing advice I still use today. I will miss his voice tellement. http://t.co/C0sbQqzJoP

Sad to hear my good friend and one-of-a-kind journalist @B_STLAURENT is retiring from CBC. I will always seek his excellent insight on Que.

A well earned rest for a veteran broadcaster. We'll all be a bit poorer for it @B_STLAURENT announces retirement from #CBC Always a big fan

@lchodan @orechetti @B_STLAURENT yes, in BOTH languages. You will leave a void Bernie! Best wishes for a great retirement

@Steverukavina Proud to say I made @B_STLAURENT laugh to tears when I asked BQ leader Michel Gauthier who his favourite book author was.

On the Newswatch assignment desk in '92, you knew news was a-breakin' when @B_STLAURENT 's hand went up and his chair went down. #bernieism

Warm wishes for the retiring @B_STLAURENT, a deservedly legendary journalist and one of the finest observers of politics in this province.

End of an era. @B_STLAURENT set to retire from CBC. I can't imagine a world without Bernie on the radio. http://t.co/uGa9dhUkiC