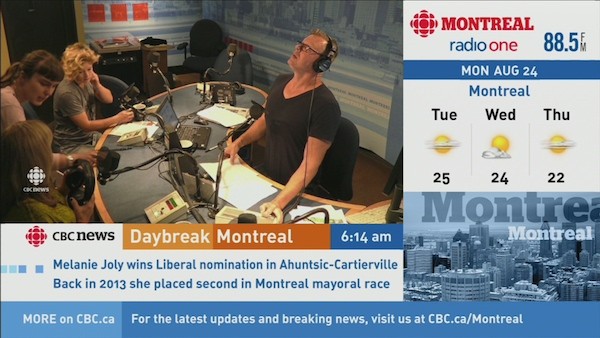 For almost two weeks now, CBC has been broadcasting an hour of Montreal radio morning show Daybreak on television, with cameras installed in the radio studio. Managing Director Shelagh Kinch explains a bit how it works on her blog. But basically, a handful of cameras are set up in the studio that allow us to see the people on the air as they’re speaking. Because the cameras are voice-activated, the switching happens without the need for human intervention (i.e. without needing to hire someone for it). 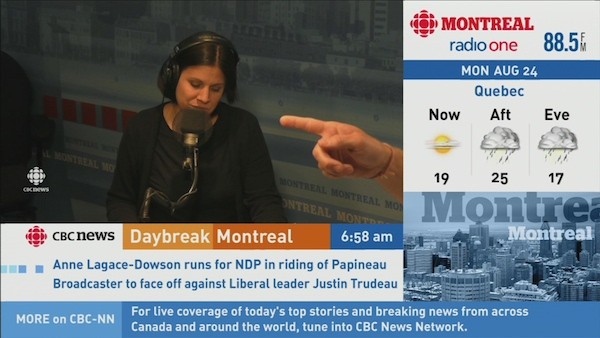 Like before, when CBC Television simulcasted CBC News Network from 6-7am, the program is surrounded by graphical elements: 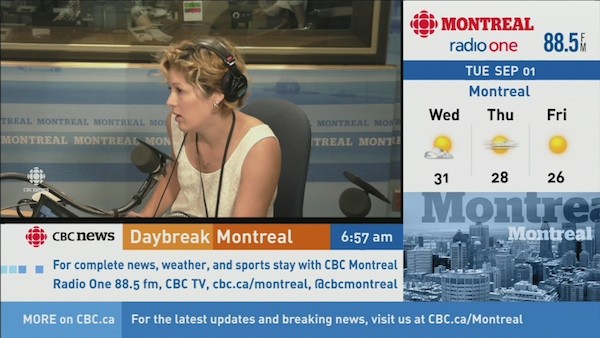 In case it’s not clear how local this is, the word “Montreal” appears a lot. In this image above, the word appears in whole or in part 20 times. 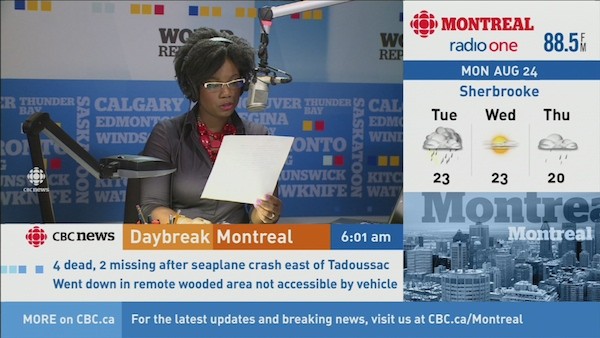 The show is broadcast commercial-free from 6-7am, even though Daybreak runs from 5:30am to just after 8:30am. It starts, as the tops of the hours do on CBC Radio, with the national World Report newscast, where a camera picks up the host reading headlines. 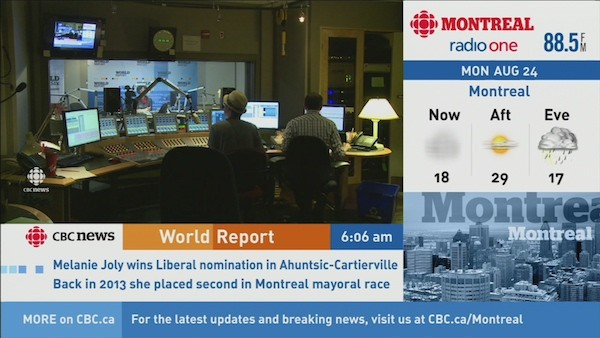 The control room at World Report.

When World Report cues packaged reports or remotes, the feed switches to a control room camera. This is about as “behind the scenes” as we get with this show. And you can only see, not hear, what goes on outside of the radio broadcast. 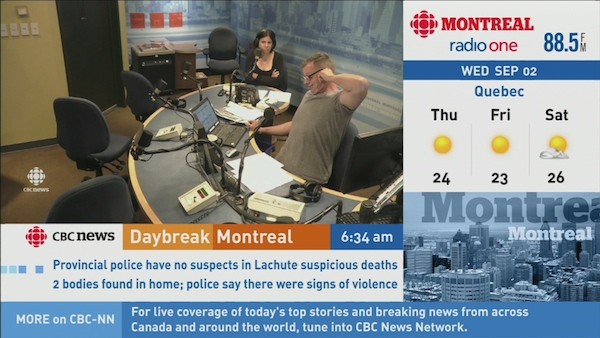 At 6:10, we turn to Montreal, and for the next 50 minutes we get a rotation of local news headlines, traffic reports, weather, sports headlines and interviews.

The broadcast ends kind of abruptly, usually cutting off Mike Finnerty mid-sentence as he gives the weather just before 7am. As far as I can tell, the TV broadcast is about five seconds behind real-time.

The Montreal studio has six camera angles that I’ve seen so far: 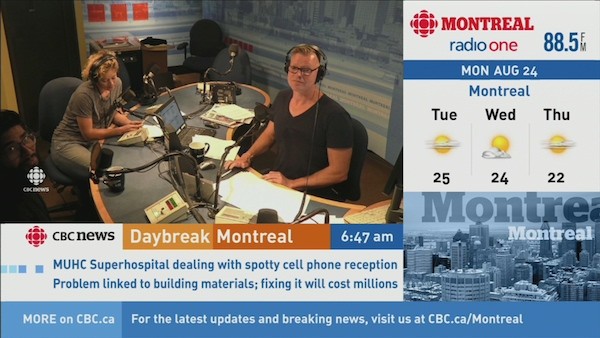 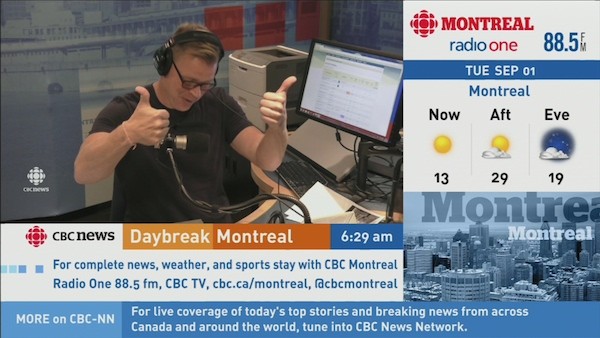 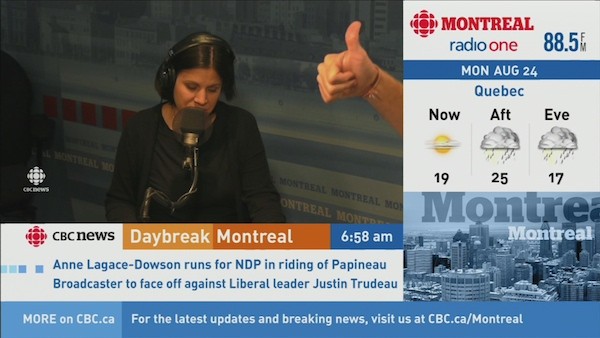 3. Medium shot of far chair, where the news headlines are read 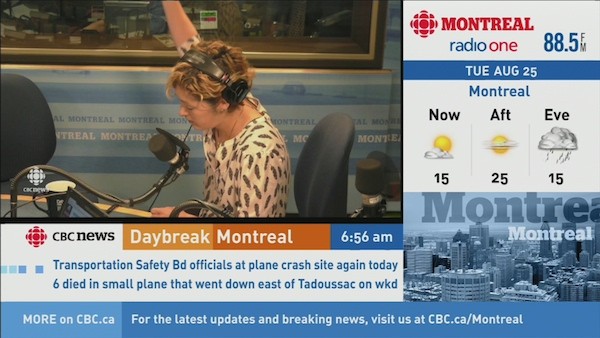 4. Medium shot of guest, with camera programmed to pan to whichever seat’s microphone is active (this can be problematic when more than one is in use) 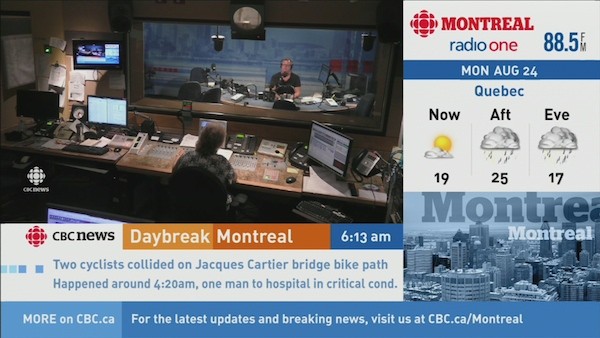 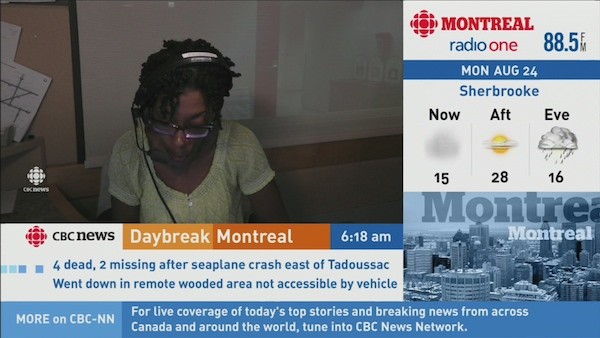 Jennifer Allen at the traffic desk.

6. Close-up of traffic reporter’s desk in the control room 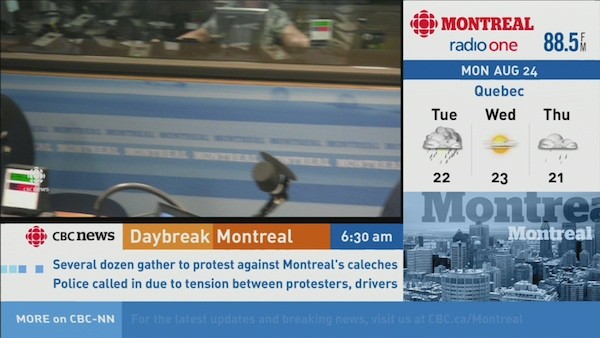 The guest camera takes a second or two to pan to the right chair.

Most of these camera angles are high, coming from the ceiling or close to it. That makes sense if you want to avoid people walking in front of them, though they still do: 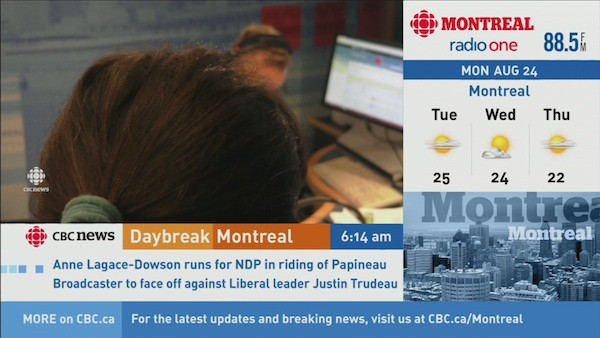 But it also accentuates the main problem with this show, which is that so much of it is just watching people looking down and reading things, or listening to things, or waiting for things. It’s incredibly boring television. 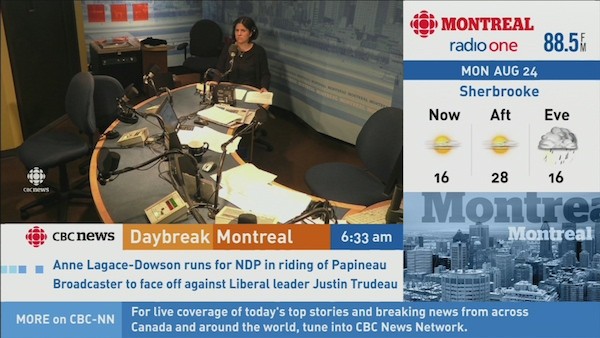 There are interviews, but we only get about one or two in-studio interviews a day. And even then they’re really just talking heads, though there have been some attempts at introducing visuals (being careful not to piss off the radio audience by referring to things they can’t see). 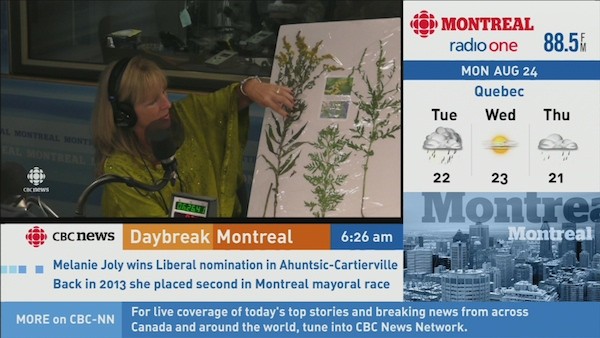 So why are they doing this? Well, the CBC likes to talk about being innovative and local and stuff, but one big reason is probably that when CBC drops its evening newscast from 90 to 30 minutes, it needs to make up that time to meet its 14 hours a week requirement for local programming. Having an hour of Daybreak on TV fulfils that requirement, and without needing to commit additional resources.

Like Global and City, CBC is finding ways to game the system as far as local programming, in part by reusing content. And as if to underscore that further, one interview captured though the Daybreak cameras has already been reused on the weekend clip show Our Montreal. 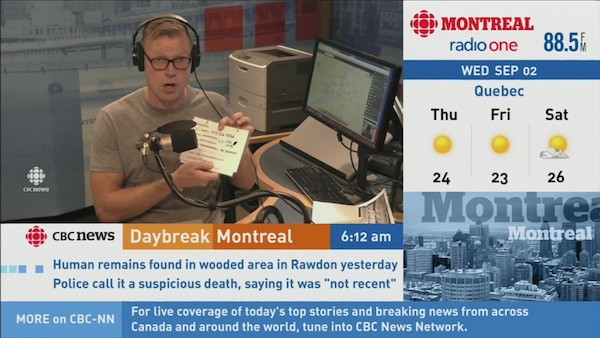 Mike Finnerty tries showing the card with Daybreak’s contact information to to the camera.

There are other minor issues with the show: 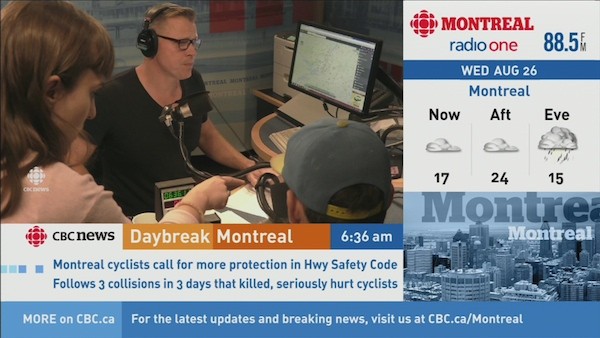 A guest gets instructed on the use of the microphone before an in-studio interview.

But all those could be overlooked if there was some redeeming value to this broadcast. And I’m having a hard time finding it. Beyond knowing what the radio personalities look like (at least from the waist up), and getting some idea of what goes on in a studio during a broadcast, the usefulness is kind of limited to the graphics and the audio.

And getting a “behind the scenes” look isn’t always a good thing. 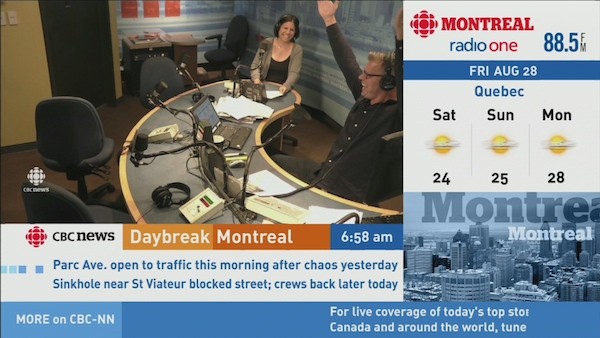 Here’s Kristy Snell and Mike Finnerty laughing while a report about a shooting is playing on the air. They’re obviously not laughing about the shooting, but to the viewer it’s kind of a jarring image when paired with the audio. 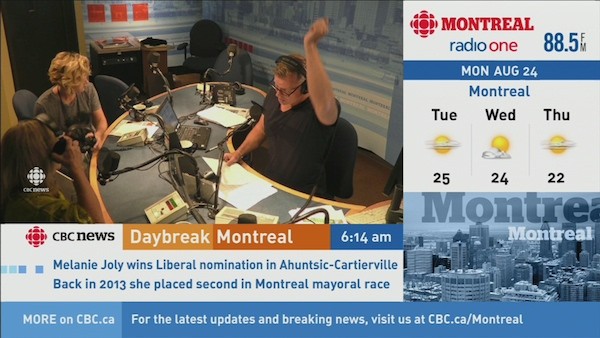 How you judge this kind of show depends on what you’re comparing it too. Radio on the TV wasn’t CBC’s idea. Both TSN and Sportsnet have radio shows simulcast on TV, though those shows have fewer interruptions for weather, traffic and news.

If you compare it to radio, there are definitely advantages. You can see people talking, and you can get at-a-glance information on weather and news. The radio show hasn’t changed, so there’s no quality loss there. Mike Finnerty refers to it as “radiovision” (and I kind of want to jeer it just for that ridiculous term), and on that level it offers a bit of added value. 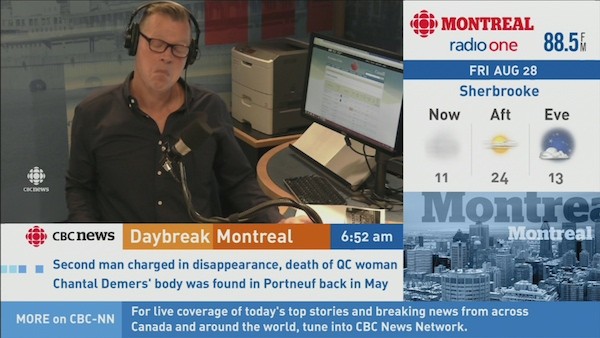 But if you compare it to television, and particularly the hour of the evening news we’re losing, it’s kind of awful. At best it’s talking heads. At worst it’s listening heads. As one listener wrote to the show (and to their credit Daybreak read it on air twice), it’s like watching grass grow. You could close your eyes and get the same amount of useful information, which makes sense because that’s called radio. 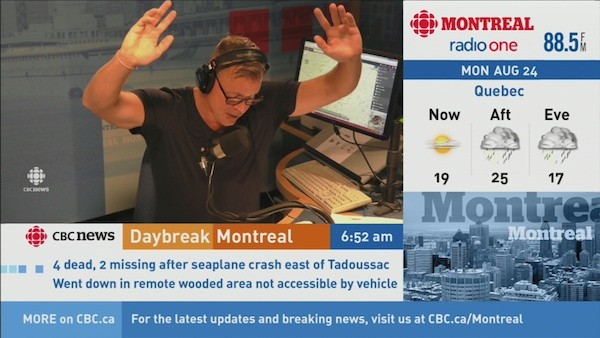 A couple of additional things to consider, though. For one thing, this is a morning show, and people watch television differently in the morning. They’re getting ready for work or school, they’re usually far from relaxed, and they probably only tune in for a few minutes at a time. So this might not be an awful thing to put the TV on in that context. People can listen to the show and glance at the TV when they want a quick look at the weather. 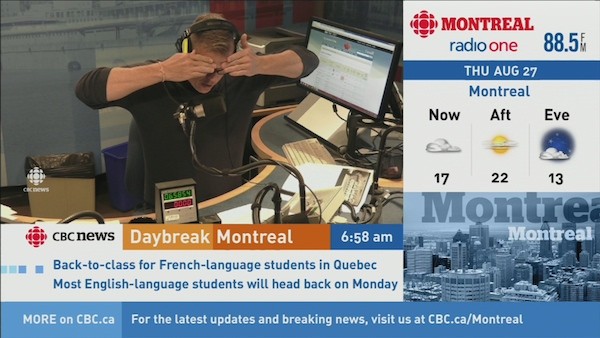 And, of course, the CBC is short on money. You can’t complain about the broadcaster’s cuts to programming without acknowledging the cuts to its parliamentary appropriation.

But viewers aren’t going to watch out of a sense of obligation if there’s something better out there. And Montreal has a local morning show, a national morning show and a Frankenstein-like hybrid of the two that are all designed specifically for television.

In short: CBC Daybreak on TV is better than nothing, but it adds almost nothing to pure radio.