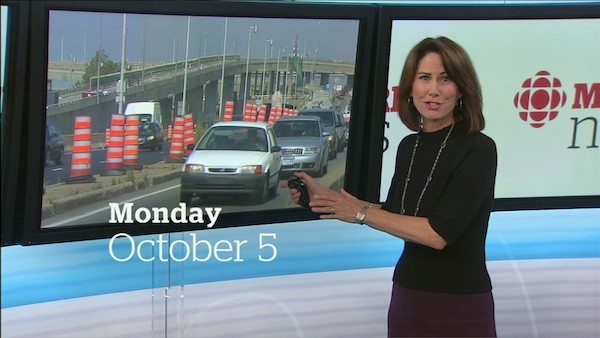 The CBC rolled out revamped — and by revamped I mean cut — newscasts across the country on Monday. Some markets were reduced to 60 minutes while others, including Montreal, get only 30 minutes during the supper hour to offer local news.

The new newscast has a somewhat different feel to it — including some different music — but most of the changes don’t seem to have much of a real purpose to them. For one, there’s more standing anchor wandering the set, and there’s a lot more use of monitors in the studio, and having the anchor look at them: 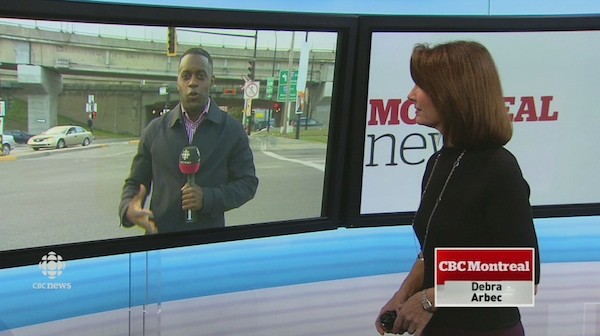 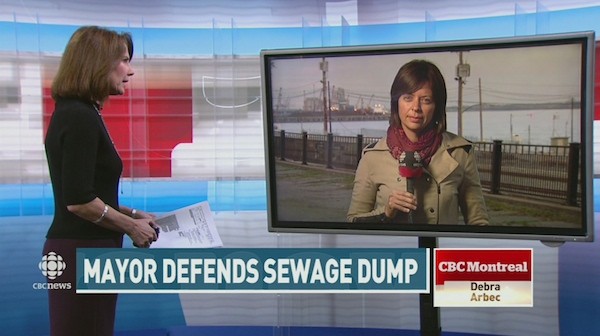 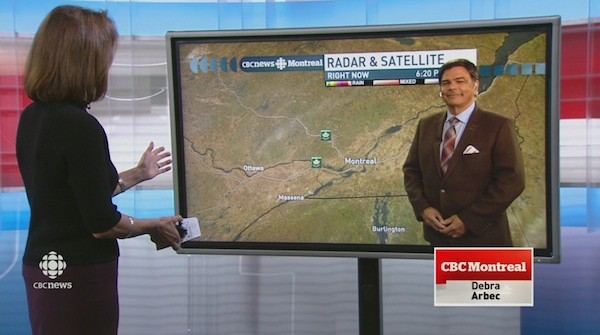 Is this better than the classic split-screen double box? I’ll let you decide. Maybe it looks cooler, but I don’t feel any better informed because of it. 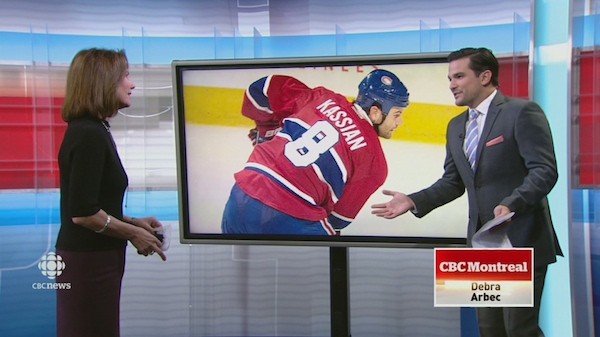 Otherwise, it was a half-hour newscast like any you’ve seen before, devoted entirely to local news. It had live hits from reporters in the field, packaged reports, a weather forecast and a sports segment. It included one investigative report, about Hungarian travellers being questioned before taking flights to Canada. 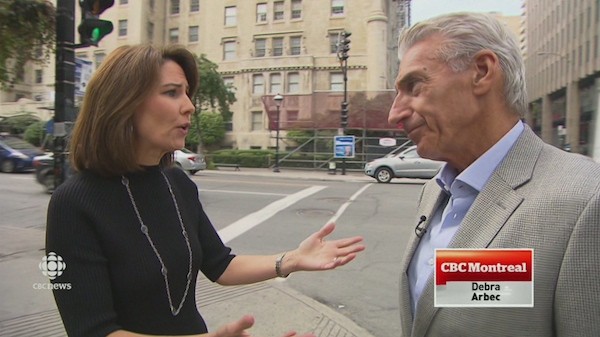 They had one short segment where Arbec did an interview on location. I’m not sure if this is something they’ll repeat. 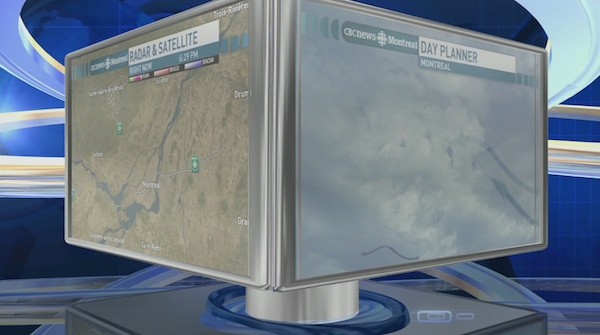 And there was this completely unnecessary 3D animation between two weather graphics at the end of the newscast that kind of struck me. Otherwise, the weather segment looks the same as it’s been for years.

That’s about all I noticed.

Technically, the newscast was a bit of a trainwreck, especially on the audio side, with B-roll being cued at full volume, in one case replacing an anchor’s audio completely. It makes you wonder what it would have been like had they not rehearsed it in the week or two leading up to it. But it’s the kind of thing that should get better over time.

You can watch the full half-hour newscast online here. 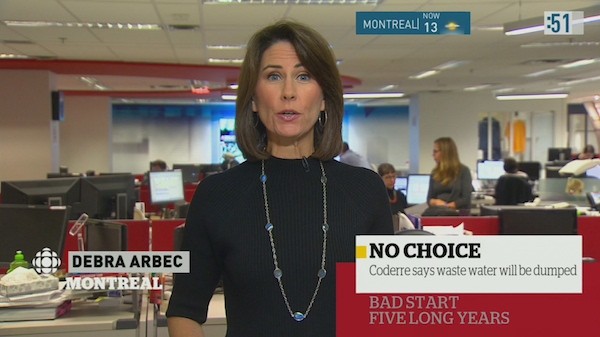 Probably the more interesting change is the introduction of one-minute hourly updates through the afternoon and evening. Airing at 2:59, 3:59, 4:59, 7:59, 8:59 and 9:59 pm, these mini-newscasts give the three top headlines of the hour and a couple of seconds of current weather before announcing what’s next on TV, telling us she’ll be “back in 60” and showing a logo reminding us that they’re “always on mobile”.

It feels pretty up-to-the-minute, though that can work against it. The third such update replaced its main story with “breaking news” of a truck colliding with a train overpass downtown that briefly affected service on AMT lines. It felt more like this was done because it was fresh rather than because it was important. That story wasn’t mentioned at all on the 6pm news.

You’ll also notice from the screencap above that there’s a small graphic showing current weather, as well as a countdown clock in the corner. The weather is fine, but I’m not sure what purpose the clock is supposed to serve. On French TV networks, we see 30-second countdowns at the top of the hour as an ad runs before a show starts, but that countdown feels more like a reminder that you can sit tight because this ad will be over soon. “It’ll be over soon” isn’t the kind of mentality you want viewers to have watching the news, is it? 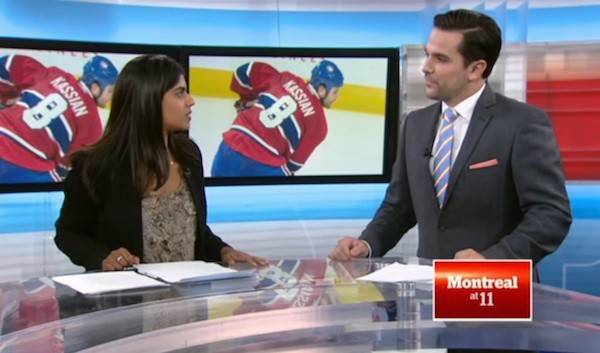 The 11pm newscast hasn’t changed at all in look and feel. The anchor (Salimah Shivji filling in for Nancy Wood while the latter is working for the national network during the election campaign) doesn’t wander, and the graphics and music are the same as before.

One thing that has changed is that Doug Gelevan is there live with a sports report. 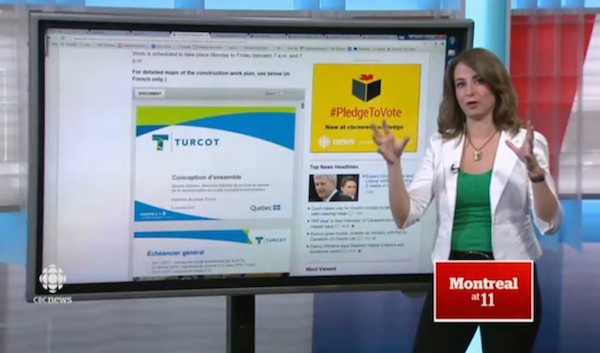 Sabrina Marandola with the “Web Refresh”

Also new is this “Web Refresh” segment from Sabrina Marandola. It basically just promotes what’s on their website, and I’m not sure why you need a separate reporter for that.

When these changes were announced, the CBC said it was part of a push toward mobile, which is increasingly where the audience is. There have been no major announcements on that part recently, and it looks like a new mobile website and local news alerts for smartphone apps are only going to arrive at the end of the month. Shifting resources to digital media makes sense if that’s really what’s going on, but I’m not sure if that shift is larger than the cuts.

In short, the hourly updates are welcome, albeit limited, the 6pm newscast isn’t nearly as different as has been hyped, and cutting it from 90 to 30 minutes does, in fact, mean we lose a lot, only some of which we’ll get back in an increased online presence.

If you don’t like it, well, the government that hands the CBC its appropriation and appoints people to its board is up for re-election in two weeks.