CKDG-FM 105.1*, a 12-year-old commercial ethnic radio station in Montreal, is up for licence renewal, and for the third straight time the Canadian Radio-television and Telecommunications Commission believes it has failed to meet the requirements of its licence, by not serving a sufficient number of ethnic groups and not airing enough Canadian music.

In 2010, when the station’s licence was first renewed, the commission found that it had failed to pay $42,022 in required contributions to Canadian content development. As a result, the commission renewed the licence for just over three years instead of a full term of seven years, and added a condition of licence requiring it to repay the shortfall by August 2011.

In 2013, the second renewal noted that the station failed to meet that repayment deadline. Owner Marie Griffiths blamed the economic recession for putting financial pressure on the station, and said it would be repaid by August 2013, even trying to offer post-dated cheques as proof of this. There were also paperwork issues, getting annual returns to the commission on time. The CRTC again renewed the licence for a shorter term, until August 2016.

This time, the compliance issues aren’t about Canadian content contributions (a new policy exempts stations with revenues under $1.25 million from having to make them) or filing annual returns, but related to programming.

CKDG’s licence, amended in 2013, has the following conditions, in addition to the standard conditions of licence:

The station is proposing to keep these conditions, except the last, which has been fulfilled and is no longer applicable.

Asked about the eight cultural groups it serves, CKDG listed “Greeks, Hungarians, Ukrainians, Romanians, Armenians, Italians, English and French Que?be?cois” in a letter to the CRTC. But English and French are not considered cultural groups according to the CRTC’s ethnic broadcasting policy, which means the station failed to meet that requirement.

The application says the error was because of “a misinterpretation of the Commission’s policy and was compounded by inadequate oversight of the weekly programming breakdowns. Although this error was unfortunate, it was honestly made, and has now been corrected. It will not reoccur.”

The station added programming last fall for Dominican, Guatemalan and Haitian communities to bring its number up to nine. 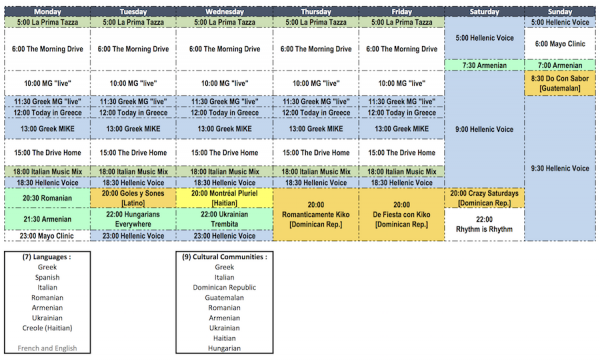 The new schedule for CKDG-FM (click for larger version)

CKDG’s conditions of licence require it to ensure 10% of ethnic songs and 35% of non-ethnic popular music are Canadian. But the commission’s analysis, based on a week in May 2015, shows it offered only 0.76% Canadian ethnic music and 24.1% Canadian non-ethnic music.

CKDG blamed this on its “inability to keep adequate records” and on not sufficiently policing licence conditions for brokered programming.

Unprompted by the commission, CKDG’s licensee Groupe CHCR (Canadian Hellenic Cable Radio), has offered its own penance for its wrongdoings: money.

“Groupe CHCR submits that it will voluntarily contribute the combined amount of $4,000 to FACTOR and Musicaction ($2,000 to each organization) over the next licence term,” the application reads, referring to the two major Canadian music development funds that larger stations are required to contribute to.

Requiring additional contributions is one of the options available to the CRTC. A short-term licence renewal is another. But it can also go further, imposing other conditions of licence, requiring the station to broadcast its failure to comply with its licence conditions, or in extreme cases suspending, refusing to renew or revoking its licence entirely.

Needless to say, CKDG isn’t in favour of most of these options.

As part of its move to get its affairs in order, Mike FM has hired new senior staff:

It has managed to do this thanks mainly to the half-million it received from selling sister station CKIN-FM. We’ll see if they can use that money to make this sustainable.

The CRTC is accepting comments on CKDG-FM’s licence renewal until March 15.

*CORRECTION: An earlier version of this post gave the wrong frequency for CKDG-FM.