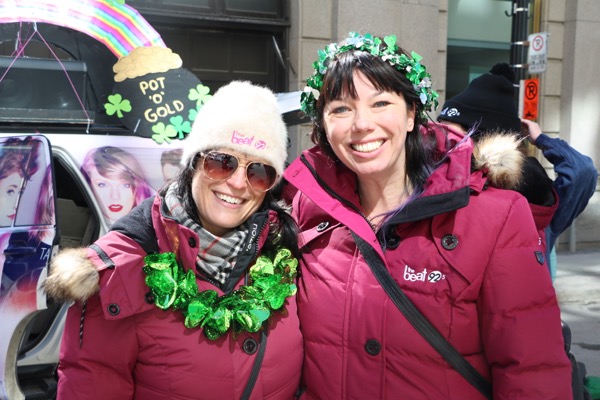 Sarah Bartok, left, and Kim Sullivan representing The Beat at this year’s St. Patrick’s Parade on March 20. The station has since told both of them it no longer requires their services.

Seems the cost-cutting at 92.5 The Beat isn’t over.

Shortly after dropping program director Sam Zniber and afternoon drive co-host Kim Sullivan, the news dropped this morning of the highest-profile dismissal yet: Sarah Bartok, co-host of the morning show, is no longer at the station. 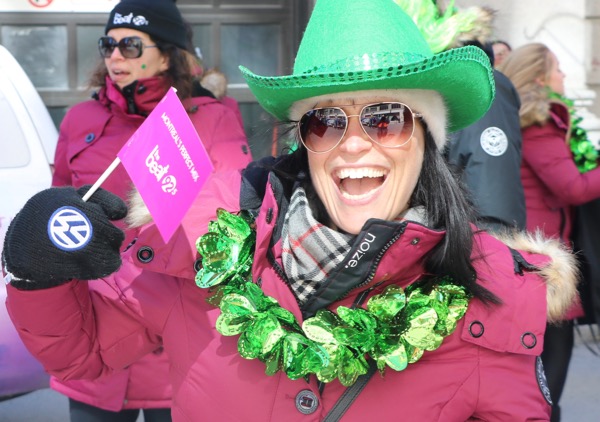 Sarah Bartok won’t be waving this flag any more.

Her name was being scrubbed from the station’s website on Wednesday (I’m told by a source in the know that she’s still an employee until her contract ends at the end of August), but already fans are sending messages to the station on social media, outraged at the cut, with some vowing to boycott. (It would not be the first time people have made such a threat against a Montreal radio station for firing a well-liked host, and will probably have the same effect.)

I wrote a short story about the decision for the Montreal Gazette, which has prompted more than 100 comments on Facebook.

The Toronto-born Bartok joined the morning show six years ago, when the station was still The Q and her co-host was Aaron Rand. It was also after it dropped Tasso and Suzanne from its morning show, a decision that also prompted outrage.

Bartok was profiled last year by the Montreal Gazette’s Phil Carpenter as part of his Before Dawn series:

Meanwhile, this is how The Beat is responding to dozens of angry posts on its Facebook page:

I don’t know what “circumstances outside our control” is supposed to mean.

UPDATE (Aug. 2): Bartok has moved back to Toronto and now has a website as she looks for her next gig.