Canada AM, which for 44 years was the national morning show on CTV, is no more. On Thursday, owner Bell Media announced that Friday would be the last show.

While it gave a chance for the show to say goodbye, it wasn’t much of one. Producers cobbled together a tribute show with lots of still pictures (many of them poor-quality social media posts taken from cellphones, and almost all from the past few years) and well wishes people sent in through Facebook, Twitter and email.

The reason for the cancellation wasn’t budget cuts, or a desire to cut down on Canadian content, or an evil plan to save money by rebroadcasting CTV News Channel (Canada AM was already simulcast on CTVNC), but rather a desire to reboot the morning show format and maybe attract a younger audience.

On Monday, Bell Media announced its replacement: Your Morning, hosted by Ben Mulroney and Anne-Marie Mediwake. (Pop Goes The News had spread a rumour that the two of them would host this show when the Canada AM cancellation broke.) The show will debut in late August.

Mulroney and Mediwake are joined by “anchors” Melissa Grelo, Lindsey Deluce (news) and Kelsey McEwen (weather). Mulroney and Grelo will continue in their other jobs as hosts of eTalk and The Social, respectively.

The most telling detail about the new show is that it’s produced by the people behind CTV’s other daytime programs, The Marilyn Denis Show and The Social, including executive producer Michelle Crespi. So expect the new show to have a feel similar to those shows.

That also means moving, from suburban Agincourt (20 kilometres from downtown Toronto), where it shared space with CTV Toronto, TSN and CTV News Channel, to 299 Queen Street West downtown, the historic home of City TV and MuchMusic, that currently hosts CTV’s daytime programming, eTalk and BNN, among others.

The fact that CTV is calling this a new show with a new name, and not simply announcing new hosts and a new studio for Canada AM, should indicate how Bell Media feels about the Canada AM brand. The fact that it’s almost a half-century old was a source of pride, but also a problem. It’s your mother’s morning TV show. So even though it’s the same idea with the same time slot and broadcast in the same places, the new show gets a new (awful) name, a new studio and a new look.

Canada AM hosts Beverly Thomson and Marci Ien will stay with Bell Media, and Jeff Hutcheson had already announced plans to retire.

Even if we accept that ending Canada AM was a choice that had to be made, it’s unfortunate that it was on such short notice. The show could have finished out the summer and been given a proper chance to say goodbye. Or even just a few extra weeks to put together a proper tribute. It certainly would have been good for ratings. 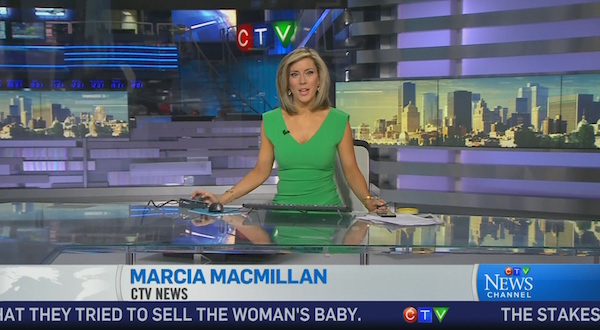 Instead, we have CTV News Channel’s Marcia MacMillan getting up earlier, doing headlines at 6am. CTV stations without their own morning shows will rebroadcast that until Your Morning gets off the ground.

55 thoughts on “CTV kills Canada AM on 24 hours’ notice, will replace it with younger version”