The stakes in a legal battle between CRTC commissioner Raj Shoan and chairman Jean-Pierre Blais have gone up significantly in the past week.

On Thursday, the government, on advice of Heritage Minister Mélanie Joly, terminated Shoan’s appointment “for cause”, without explaining what that cause is.

Shoan announced Friday he would appeal the decision in federal court and seek an injunction to reverse it. 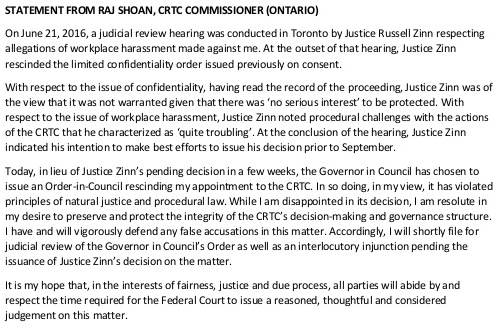 The only clue as to what caused this in the order is the sentence “certain of his actions brought to her attention called into question his capacity to continue serving as a Commissioner of the CRTC”, and that this happened at some point prior to Feb. 26, 2016. There’s no obvious event that would have triggered this.

But the timing is very suspicious. As Shoan notes, this week there was a hearing into another appeal by Shoan, to have a decision by Blais overturned by the court. Shoan objected to the acceptance of a report that he harassed a member of the CRTC’s staff in a series of emails.

The judge in that hearing seemed to be siding with Shoan, finding it problematic that Blais was both a witness interviewed for the report and the man in charge of accepting it. A decision on the matter was expected by September.

Now the heritage minister is directly involved, there is yet another legal process, the legality of future proceedings could be put into doubt, and all sorts of efforts are going to be focused on this rather than policy matters that could help improve Canada’s chaotically changing broadcast media and telecom industries. And all that because of what so far seems to amount to a personality conflict between two overly assertive men that has gotten out of control.