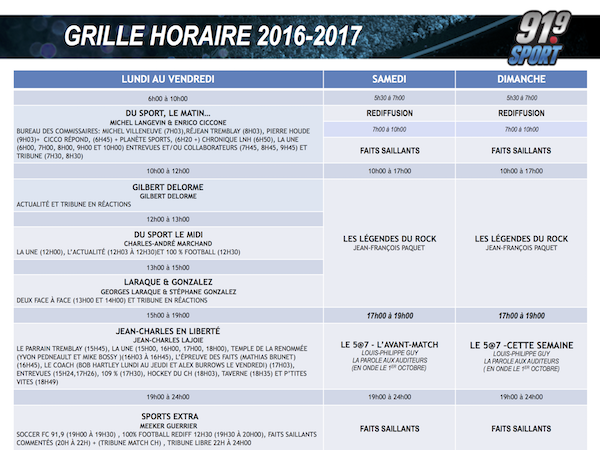 The station didn’t mention this in its press release, but the best news is that for the first time since 2013 (and only the second time since 2011), CKLX-FM 91.9 in Montreal will not be starting its fall season with a new name and radical change in format.

What began in 2004 as Couleur Jazz and then became Planète Jazz, then Radio X in 2012, then Radio 9 in 2014 and finally 91.9 Sport in 2015, will stick with that last brand for a second year, as Montreal’s only full-time French-language sports talk station.

And it’s expanding its programming into the evening. No, it isn’t airing live sporting events, but it will have talk weeknights until midnight, the last two hours of which on game nights will be an open-line Canadiens postgame show, even though the Habs game airs on competitor 98.5 FM.

There’s also a pregame show on weekends, from 5-7pm.

The weeknight show is called Sports Extra, and hosted by Meeker Guerrier, who has been their soccer specialist. Soccer and Football have their focus earlier in the show (when hockey fans will be listening to the game). Perhaps the most interesting thing is that he’ll also be taking calls during intermissions. (Why not take calls during commercials why you’re at it?) That will require some juggling, since they can’t have dead air otherwise. Similar to how RDS does l’Antichambre on Saturday nights, it means finding very flexible filler programming otherwise. Fortunately that’s easier to do in radio than on TV.

The weekend show Le 5 @ 7 will also be an audience-driven show, giving people the chance to make predictions before games. Sunday’s show will include a week in review and a focus on football.

The other big addition is Pierre Houde, the RDS Canadiens play-by-play man, who will become a columnist on the morning show. Other than saying he’ll be commenting on the news, it doesn’t give much detail on what we should expect, but you can make a good guess. Houde does a similar thing on a regular basis on CHOM-FM with his friend Terry DiMonte.

Outside of these hours will be mainly rebroadcasts and highlights of other shows.

The morning show interviewed general manager Yves Bombardier this morning to explain the changes and video is up on their website.

One thing he points out, and is clear from the schedule, is an attempt to structure the programs to create rendez-vous moments. Soccer and football fans will know when to tune in to hear programming related to their preferred sport. People who want to listen to Pierre Houde will know to tune in at 9am. And there are top-of-the-hour three-minute newscasts during morning and afternoon drive and at noon.

More people are listening, but is it enough?

The station is cautiously optimistic, and their ratings explain why. The station’s reach and average audience is about 1/10th that of 98.5 FM, and even among men 25-54, which should be its core demographic, its market share is stuck around 4-5% vs 30% for 98.5. (For women, it’s virtually nil.)

But its numbers are better than it used to be. If you look at overall (ages 2+ 24/7) ratings measured by BBM/Numeris in the spring of each year, you see the station was much better in 2016 than any of the previous five years.

A doubling of ratings isn’t that fantastic when you’re so low to begin with, but it’s enough that they’re sticking with the plan. The increase in share with a more modest increase in reach means that people are tuning in longer.

UPDATE (Oct. 9): The weekend lineup has been tweaked. I’ve updated it above.