With any luck this should return to its usual schedule starting next Wednesday.

There was a Class A shitstorm in Quebec media this week about a piece by Andrew Potter (former Ottawa Citizen editor and current McGill professor) tying the clustertruck on Highway 13 during last week’s snowstorm to some greater social malaise in Quebec. It includes statistics suggesting Quebecers are more socially distant than the rest of Canada, but also had some head-scratching generalizations about restaurants offering two bills and bank machines dispensing $50 bills.

Le Soleil even did a fact-check, as did La Presse’s science blog, and even Maclean’s, all finding that Potter’s statistics about Quebec society were accurate, though his conclusion of a “pathological” problem was exaggerated (they say nothing about the anecdotal stuff like restaurant bills).

Potter finally apologized and distanced himself from his own story (earning at least some praise for that rare move). That wasn’t enough, though. McGill, after publicly throwing him under the bus, “accepted his resignation” from his job as head of the McGill Institute for the Study of Canada (a Maclean’s story says the resignation was not voluntary, citing anonymous sources who also say “numerous high-profile figures have contacted McGill since Monday to express their personal displeasure with the column”, which prompted figures as high as the prime minister’s office to deny involvement). McGill says academic freedom is not at stake, which convinced precisely no one. 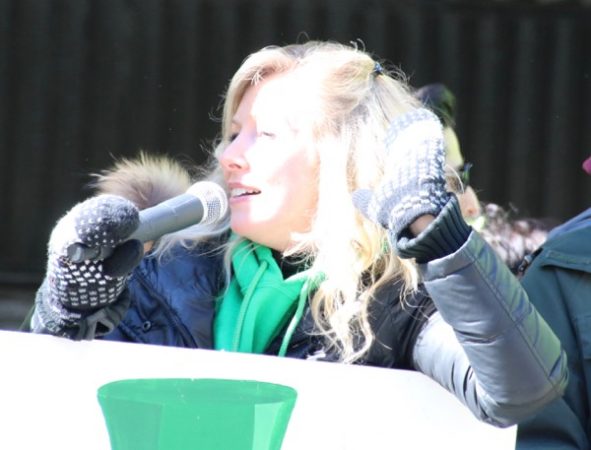 Lori Graham on the CTV float

We’ll pay you in visibility, said the person in the equation who needs visibility.

Denis Grondin, a former announcer at CHOM, CKOI and 98,5fm (or, as some media described him, he’s the father of actor Marc-André Grondin), died suddenly of an apparent heart attack the night of Tuesday to Wednesday. He was 66.

So sudden was his death that it came mere hours after he recorded his weekly show Samedi soir sur la terre for Radio Ville-Marie. The show aired Saturday night as planned, complete with the promise to return next week. You can listen to the final show here: Hour 1, Hour 2.

There weren’t much in the way of formal obituaries in the media, but the French-language news outlets generally offered briefs with tributes that were made on social media:

I’ll do the same below. I’ll also link to this interview in Urbania from last year, where Grondin looks with a critical eye at the state of the industry today.

On Friday, Grondin’s family responded with this:

END_OF_DOCUMENT_TOKEN_TO_BE_REPLACED

Numeris, the company that measures radio and TV ratings, came out with their quarterly report this week, and once again it was Cogeco’s 92.5 The Beat that had the most good news to announce on the anglo side.

Among anglophone listeners, CKBE-FM had a 17.2% audience share, second only to CJAD’s 28.2% among all listeners. Virgin Radio was well back at 13.5%.

The shares were mostly stable among the anglophone audience, but the exception was Virgin, which was down for the second straight quarter and by almost three points compared to the same time last year. (I’ll compare year-over-year because two years ago when The Beat had a surge in the winter book Virgin claimed it was because of Christmas music that aired on The Beat during the holidays.)

CHOM recovered a bit after hitting a new low in the last quarter. It’s still fourth among anglophone stations, but it regained its position as first among men 25-54.

Despite this being a good report, The Beat couldn’t resist getting cute with spin, saying it’s the “number one radio station”, which only works if you (a) exclude the francophone market and (b) exclude people outside the 25-54 demographic. It also called its morning show the “fastest growing” one in the market with new hosts Vinny and Nikki. Which is kind of like saying your kid is “most improved.” The Beat’s morning show has been historically weak while its daytime has been strong.

Bell’s press release stressed its combined market share (which is, of course, because it owns most of the stations). CJAD still has the highest share by far, and 8 of the 10 most listened-to shows among anglophones. TSN 690 is stable at a 4% share, and CBC Radio One climbed more than one and a half points, its total audience up about 25% among anglophones.

Victory for 98,5fm, Radio-Canada and 91,9 Sports, loss for Rythme and Rouge

On the franco side, unsurprisingly it was another win for 98,5fm, which once again declared itself the most listened-to radio station in all of Canada. Though its average minute audience of 37,300 (in its central market) is beat by Toronto’s CHFI-FM with 42,400.

Bell Media’s press release couldn’t dig up much to say about Rouge FM, so it led with Énergie instead, noting its improvement. Rouge FM dropped 2.5 percentage points in market share from a year ago.

Not that Rythme FM was much better. Though it’s still ahead of Rouge FM in the ratings, its share dropped to 16.3% from a high of 20.5% in the summer.

Great news for Radio-Canada’s Première station, which after hitting a low of 6.6% this summer has hit a high of 13.4%, putting it third in the market. Radio-Canada’s press release notes that morning show Gravel le matin is second in the market, behind 98,5fm’s Paul Arcand.

There were some winners on the low end of the ratings board as well.

RNC Media’s 91.9 Sports, which went through a series of format changes — from jazz to right-wing talk to news talk and finally to sports — in an attempt to find an audience, seems to be happy with the sports talk format. It had a 2.1% share, which is 50% higher than the last ratings book, and an average-minute audience of 3,700 which just slightly edges Radio Classique. The boost was enough to warrant an article in the Journal de Montréal.

Good news as well for CHRF AM 980, which more than doubled its share to 0.7%. Still dead last among music stations, but it’s an improvement.

Community station CIBL, which started reporting for the first time last quarter, is still the lowest-rated station overall, with an average of 200 listeners in French and an English number within the margin of error of zero. The station looks like it’s going to stay here for the time being. Its new manager explained during a recent general assembly that they discovered Numeris offers lower prices for community stations.

The National Hockey League trade deadline. That magical moment when NHL fans stay glued to their TV screens with the hope that their team’s general manager will pull off the deal of the century that will get their team to the Stanley Cup.

For TSN, it’s an annual event, filled with analysts, insiders constantly on their phones, and gimmicks to fill time. For Sportsnet, which only really started treating this like TSN does after it got the NHL national rights, it’s a chance to compete with the traditional leader at this game. Both networks began their coverage at 8am, going through past the 3pm deadline.

I recorded both networks from 8am to 5pm so I could compare their coverage. It’s one of the few events you can do that, because unlike game broadcasts or events like the NHL draft, there are no exclusive rights here. The two had a lot of similarities — multiple desks of analysts inside a big studio, an insider guru (Bob McKenzie vs. Elliotte Friedman), on-screen graphics listing recent trades and players who could be up for grabs, and reporters in all seven Canadian NHL markets following their teams’ actions and getting comment from their general managers. They also had several differences. TSN tried to be funny, even getting actors Jay Baruchel and Jared Keeso to do sketches for them. Sportsnet had some fun but it was mostly talking heads.

But, really, who cares about that stuff? I wanted to compare them based on the thing that really mattered: Who breaks the news first.

I compared when the two networks announced trades during their broadcasts to see which one came out first. I also compared when they interviewed players who had just been traded. (There were other journalistic scoops, such as confirming that a player wouldn’t be traded, or a team was done trading, but I left those out of this assessment.)

Here’s how it went. All times are Eastern, and are based on my PVR. There’s an inherent imprecision when it comes to digital television, so the times could be off by 30 seconds or so. For the purposes of determining a winner, I’ve considered any announcement within 30 seconds apart on the two networks as a tie. (Only what’s broadcast on TV counts here. I’ve ignored Twitter, app or other non-TV alerts.)

Most of these were very close to each other, and the difference is often as simple as how fast you can get the panel to stop talking so it can be announced on air. Sportsnet got a clear win on the Vanek trade, and TSN was first by quite a bit to peg that Frank Corrado was being returned as part of the Eric Fehr deal. For Iginla, TSN was first with the rumour of his trade to L.A., but Sportsnet was the first to confirm it (or at least be confident enough to go with it — some of these trades were hard to judge because they were reported with varying degrees of confidence.)

The other announcements were all within a couple of minutes of each other.

But by my judging criteria, TSN wins seven, Sportsnet wins four, and four are ties.

After a trade breaks, there’s a rush to get the players involved on the phone to discuss what happened. Here’s how that broke down.

No real contest here. All three players who spoke to Sportsnet did so after talking to TSN. (There were also interviews with players who had been traded before 8am on trade deadline day, but those were not breaking trades so I did not include them here.)

Both networks carried GM press conferences from Canadian teams and did good jobs of analysis. Though TSN still takes the edge here, Sportsnet has made up a lot of ground in terms of what really counts — breaking news.

Maybe by the time their 12-year NHL deal is done, they’ll be the ones blanketing their late-February broadcasts with promo ads about this news-reporting event (which didn’t report a single thing for almost four hours).

It's been a crazy 48 hours!!!! Thanks everybody for all the love!!! So happy to have married this amazing woman! #blessed #marriage #luckyguy #love #inlove (Photo credit the amazing @kenconnors)

The Free Press newspaper, which launched as the N.D.G. Free Press in 2009 and later expanded to include neighbouring west-end communities, has published its final issue, its editor told Mike Cohen and the Montreal Gazette.

Its sister paper, the Westmount Independent, will continue to publish, David Price says.

As a free paper, distributed mainly through the mail, the twice-monthly Free Press required advertising revenue to survive, but despite a recent plea to readers, the paper couldn’t find enough advertisers to become profitable.

The Free Press wasn’t the kind of news machine that you’d find at the Montreal Gazette or CBC or La Presse, but it was independent, and it tried to fill the hole left after Transcontinental shut down what was left of the old N.D.G. Monitor. There’s still The Suburban, which has a west-end edition, and of course the daily Gazette, but residents of that part of town will be less connected to what happens in their community.

I will be consulting the community. Maybe there will be something we can do to save #NDGFREEPRESS

City councillor Marvin Rotrand tweeted something offering hope something could be done to save the paper, but that seems too little, too late at this point.