It’s the height of the Just For Laughs comedy festival, and I’m having a great time burning two weeks of vacation from work. Not to humblebrag, but I got to sit in an aisle seat in row F for the Colin Jost and Michael Che gala last night, laughing enthusiastically as the audience-reaction camera guy pointed his camera at seemingly everyone just above, below and across from me in the aisle. (Note to self: Next time bring pretty lady to sit next to me.) The best seat I’ve ever had for a JFL gala, and probably ever will until I start making Anne-France Goldwater money.

But the highlight of the night for me didn’t come from the gala seat, which would have cost about $100 had I not gotten them on the JFL pass (insane value, folks). No, it came from an under-attended Off-JFL show that I only went to because there was nothing else available at that hour.

“I hope to see you at several bars tonight” is how Colin Jost said goodbye at the end of his gala. It was a nice little joke about how he (and, really, most visiting comedians) spend most nights bar-hopping and drinking here. I wondered what bars he was going to. Turns out, at least one of them was the same bar I was going to.

Looking to maximize my enjoyment of my Zoofest/Off-JFL pass, I looked for a midnight show to end the night with. The Midnight Surprise was long-ago sold out of pass tickets, and the Alternative Show, Big Jay Oakerson’s crowdwork show and Boast Rattle (a Roast Battle knockoff in which comedians praise each other) were all full. There was one show left that I could go to for free: The Goddamn Comedy Jam.

The description was brief and not terribly enticing: “Comedians perform a stand up set and short story followed by a song of their choosing, accompanied by a live band.” It wasn’t really what I was into. I want comedians to perform comedy, not bad karaoke.

Just before going, I checked to see if any of the other shows had opened up free tickets. Had that happened, I would have switched mine. They didn’t, so I went.

Attendance was poor. Katacombes seats less than 100 on the ground floor, and maybe half that upstairs. There were so many empty seats that the band insisted the audience move forward to the front row.

And then they started. A live band, very talented (several played more than one instrument during the night, and one guy had an electric violin), and well-known comedians saying a couple of jokes before rocking out to a song.

Before that, though, host Josh Adam Meyers did some crowdwork, spotted me in the front row and invited me on stage where he and Jeremiah Watkins made fun of my nerdiness by asking me questions about Dungeons and Dragons and calling me Gandalf. (I’m a fan of neither D&D nor Lord of the Rings, but yeah, I’m a total nerd.)

As best as I can recall, this is what the lineup was: 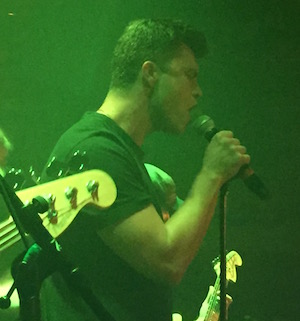 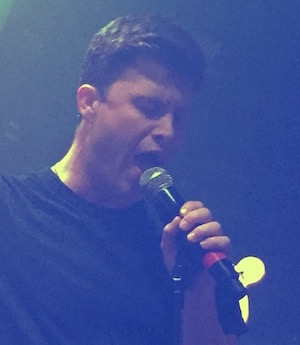 And finally, Big Jay Oakerson, who I guess walked over from his own midnight show at Café Cleopatra down the street, performed a Canadian classic that I’m not 100% sure wasn’t just him trolling the audience but in any case we just ate up:

I took a short video of the song because by now it had become clear that the “no photos and videos” rule didn’t apply to this show. Even the comedians themselves pulled their cellphones out: 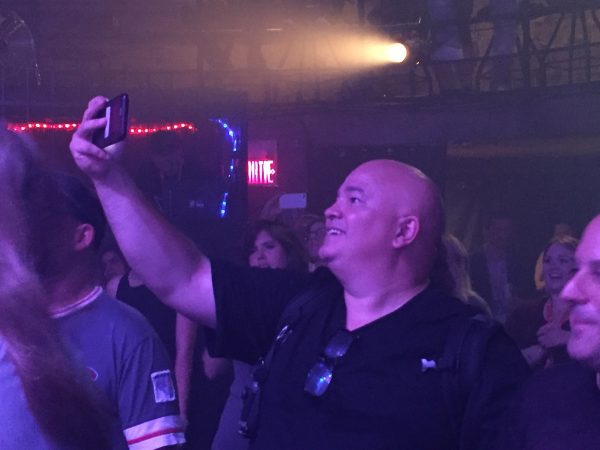 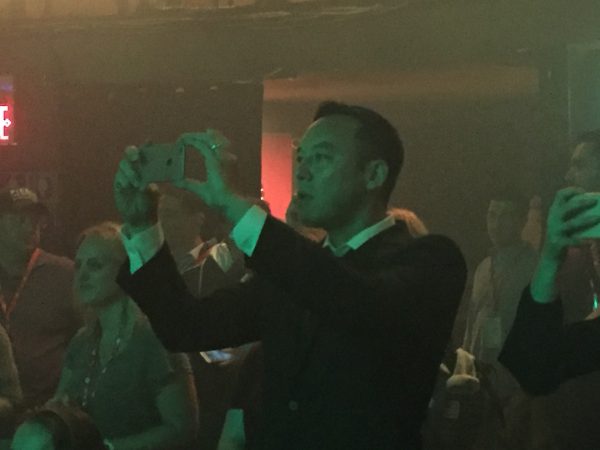 Byrne had performed the previous night at this show. If you’re looking for more videos of last night, Byrne probably has them.

Smoke machines were pouring so much of the stuff into the room that you couldn’t see the upstairs balcony and could barely see the stage sometimes. The crowd was jumping around to the music, and the chairs in the room were barely used after the first 10 minutes. There weren’t no side-splitting moments of laughter, just a whole lot of fun. 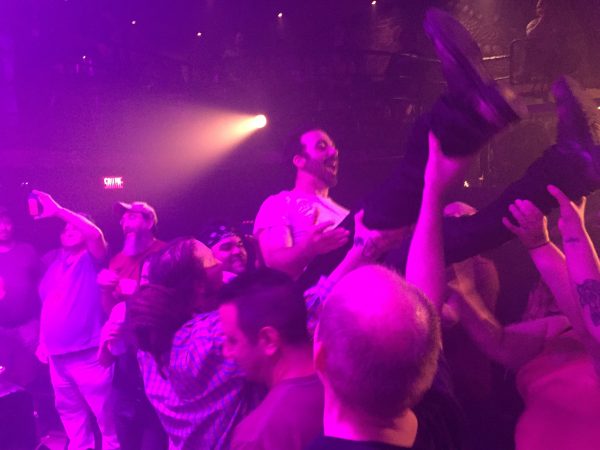 If it seems from these photos that there were a lot more people at this bar, that’s right. By this point of the evening it was packed, and as I looked around the room I could see most of the people had passes hanging from lanyards around their necks. These weren’t people who paid for tickets for this show, these were comedians and their entourage, industry people and JFL staff who knew where they should be hanging out at 1am on a Wednesday-night-becoming-Thursday-morning. I wondered: Had I stumbled on a de facto secret JFL staff party?

The night ended with all the comedians on stage, including people who hadn’t performed that night like Byrne, Sarah Tiana and Tony Hinchcliffe, performing Guns N’ Roses’ “Sweet Child O’ Mine”

At 1:30am, it was over. I left the bar, holding the door open for Colin Jost and wondering how much permanent damage was done to my hearing and my voice.

I chatted with fellow audience members and Meyers after the show, expressing how much it exceeded my expectations. Meyers was grateful, and said I should come back and spread the word, because the show is not being marketed enough.

That’s partly why I’m writing this, to give the Goddamn Comedy Jam a proper plug. The show continues through Saturday, and tickets are less than $25 (tonight’s show is also open as a free ticket as I write this for Off-JFL pass holders).

If you don’t want to spend any money at all, there’s a free outdoor show Saturday at 9:15pm on the big stage at Place des Festivals.

But I’m also writing this to point out all the craziness that happens after midnight at Just For Laughs. Comedians who have performed solo shows or club shows or galas earlier in the evening stop by, sometimes unannounced, to try out a few jokes, make a few extra bucks, or belt out a tune for fun.

While all this was going on, there were other midnight shows with memorable moments of their own, like Judd Apatow stopping by the Jeff Ross/Dave Attell show:

Or Kevin Hart at Midnight Surprise:

The point is, there’s a lot of stuff going on at this festival, between the podcasts and panel discussions in the afternoon, the big shows in the evening, and the surprises late at night. If you can afford to do so (both money-wise and time-wise), you should check these smaller shows out. And don’t let your preconceived notions of what a show is going to be like prevent you from gambling on an experience that you won’t ever forget.

Sadly, I have midnight shows booked for the rest of the week, so won’t be back to the comedy jam in 2017 (besides, my ears need time to recover). But you can rest assured I’ll be booking it at least once next year. Hopefully for them, tickets will be harder to come by.