Wednesday, April 11, Sherbrooke St., heading east from Atwater Ave. A cyclist, riding in the right lane, is minding his business when suddenly an STM bus passes within inches of him in a dangerous pass. The cyclist catches up to the driver twice to argue with him, all caught on video. He posts it to YouTube and a day later some prominent local personalities (Dominic Arpin, Patrick Lagacé) share the video on social media.

It’s disappointing that anti-cyclist mentality has reached this point. As an occasional cyclist myself, I’m well aware that there are some really dangerous cyclists out there. But nothing this cyclist did was dangerous, and yet he gains little sympathy from people.

He shouldn’t have been in the middle of the lane 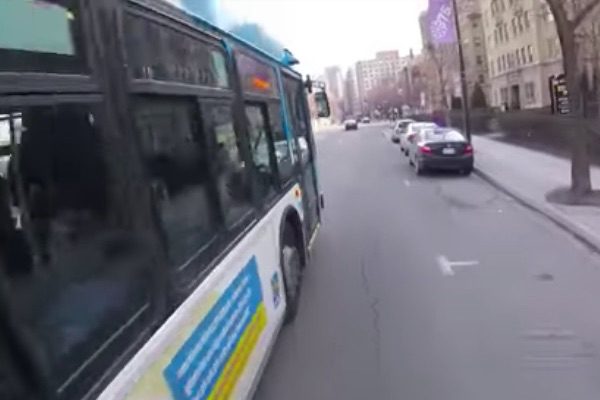 The bus makes its dangerous pass, inches from the parking lane.

The wide angle of the camera distorts it a bit, but I estimate about a metre, maybe a metre and a half, between the bus and the lane of parked cars as it passes the cyclist. That’s far less than there should be for any semblance of safety.

According to Quebec’s Highway Safety Code, Article 487: “Every person on a bicycle must ride on the extreme right-hand side of the roadway in the same direction as traffic, except when about to make a left turn, when travel against the traffic is authorized or in cases of necessity.” What “extreme right-hand side” means isn’t clarified here, and this article has been criticized as being written assuming country roads with wide lanes, not city streets with street parking. In my mind there’s little doubt that the cyclist is as far right as he can be safely. Remember as he passes those cars he has to worry about being doored.

The driver of the bus clearly did not respect the code.

But let’s put that aside and assume the cyclist *was* in the middle of the lane. Is that legal? It’s hard to say. Is it safer? Absolutely. Because drivers do this kind of stuff all the time. They don’t care about what’s a safe distance. They don’t even care if they hit the cyclist, because they’re protected by their car. So if they can squeeze by in the same lane, they’ll give it a shot, no matter how dangerous it is for the cyclist. The only way a cyclist can protect himself is to stay in the centre of the lane.

I’ve been there many times. And believe me, if the lane was wide enough for both, I’d be more than happy to move over to the side. The last thing a cyclist wants is an angry and unpredictable driver right behind them.

The cyclist should have used the bicycle path

From where the video starts at the corner of Atwater Ave., de Maisonneuve Blvd. is about 200 metres away. That’s not far. But past Fort St., that distance starts to increase. By Berri St. it’s 500 metres. But more importantly, there’s a much larger difference in altitude between the two. So much so that at Hôtel-de-Ville Ave., the sidewalk is actually stairs.

Without knowing the cyclist’s origin or destination, it’s hard to say for sure whether it would have made more sense to use the path. But as someone who has cycled on Sherbrooke a lot, the height difference is the main reason why. I’d prefer to take side streets, but there aren’t many options for that downtown above Sherbrooke.

In any case, there’s no law that prevents a cyclist from using a street if another street nearby has a bicycle path.

Why was the cyclist filming this?

Because this kind of stuff happens all the time. Just like Russians have gotten into the habit of installing dashboard cameras in their cars, some cyclists have put cameras on their helmets and set them to record automatically, knowing it won’t be long before they catch some driver doing something dangerous.

Cyclists are all awful

There are a lot of dangerous cyclists out there. Those who run red lights, zig-zag dangerously through stopped (and sometimes not-so-stopped) traffic, go the wrong way on one-way streets, ride on sidewalks, and talk on their phones. We should definitely have more enforcement of safety laws. But that doesn’t mean we should endanger the life of a cyclist who has broken none of these laws.

Anyway, the STM says the driver is going to be spoken to, and the actions were unacceptable. (They should also talk to him about driving with headphones on, which is also against the safety code.) Hopefully he learns his lesson before a decision to risk someone else’s life leads to a mistake with more lasting consequences.

31 thoughts on “The bus and the cyclist”