UPDATED with results of the test below (spoiler alert: a massive failure).

On Monday at 9:55am, people in Quebec will get their first taste of wireless public alerting as their phones blurt out the most annoying sound bureaucrats could conceive and display a test message. (Ontario’s test is at 1:55pm and the rest of the country will get the alert on May 9 at 1:55pm local time.)

At the same time, television and radio stations will interrupt their regular programming to send out similar alerts, and TV set-top boxes will display them or automatically tune to a special channel.

It’s a good step toward building a system that can save lives in the event of an emergency. And though people might complain that it’s taken too long to get to this point, that the CRTC or the government or broadcasters are dragging their feet, the truth is that this is the kind of thing you really want to make sure to get right. The last thing you want is people trying to figure out how they can disable these alarms because there are too many false ones.

Unfortunately, even before the alert goes out, I’ve noticed some problems with the system that authorities should really look into fixing.

All phones will be displaying a message when the alert goes out. Except that’s not true, because the alert will only show on cellphones that are LTE-compatible and programmed to receive WPA (Wireless Public Alerts, not to be confused with the Wi-Fi Protected Access security protocol). You can check whether your phone is compatible on the alertready.ca website, but the list is shockingly small. The Samsung Galaxy S6 isn’t there. Most Motorola phones aren’t either. Or BlackBerry phones. Or Huawei phones. Or LG phones. Just a handful of the latest models from each company.

My phone isn’t on the list. Neither is my father’s. I looked it up when he asked about it. But it’s no big deal, we can just download an app that will display the messages, or sign up for text message alerts based on a home address.

Scouring the alertready.ca website, I could find neither of these options. There appears to be no official service to opt in to text-message emergency alerts. And the website makes no mention of any apps, official or third-party, that can allow older/incompatible devices to receive emergency alerts.

(Provincial governments do offer some services. You can sign up for text alerts in Ontario here if your provider offers an email-to-SMS gateway.)

I went looking and found two apps that suggest they offer such alerts: The Weather Network app (TWN’s owner Pelmorex is responsible for administering Canada’s national public alerting system) and the Canadian Red Cross’s Be Ready app. But neither of these apps have emergency public alerting as their primary function. There are also some provincial government apps, but not all provinces.

(UPDATE: Neither app issued any notification to me during the alert, though others have reported receiving alerts on the Weather Network or MétéoMédia apps.)

Such a simple application should not be that difficult to construct, and would have enormous public benefit. And the public awareness campaign around the test alert would have been a perfect opportunity to get people to download such an app. An opportunity wasted.

The message was unusual for an Amber Alert, which is normally meant for child abductions where the police believe the child’s life is in danger. Normally the alerts identify the abductor (often a parent) and include a description and licence plate number of the vehicle the child was abducted in. But in this case, it’s “this child was possibly abducted. No suspect and no car so far.”

As it turns out, the police later believed that the child was not abducted, but likely fell accidentally into the Rivière des Prairies and drowned. Within 12 hours the Amber Alert had been cancelled for reasons that are unclear. The river was searched but no body has been found.

The story of young Ariel is heartbreaking and devastating for any parent. But does a missing child qualify for an Amber Alert?

I learned through this that each police force has its own similar but subtly different criteria for launching an Amber Alert. The SPVM’s require that “the police have reason to believe” that a minor was abducted and that child’s physical safety or life is in serious danger, and they have “information that may help locate the child, the suspect and/or the suspect’s vehicle.”

It does not require the existence of a suspect, or strong direct evidence that an abduction has taken place or that the child’s life is in danger.

In this case, it was only the parents’ insistence that the child must have been abducted that led police to this belief.

The RCMP’s criteria are subtly different:

Ontario criteria (which apply to OPP, Toronto police and others) also have subtle differences:

Some people, when I mentioned the appropriateness of the Amber Alert in this case, responded with some version of “Who cares? Better safe than sorry.” I understand that argument, but expanding Amber Alerts to all missing children would lead to a lot more alerts. Because children go missing all the time, and often they’re found pretty quickly. Gabrielle Rousseau, 17, Zack Descoteaux, 14, Steven Raux, 16, Selisha Robb, 16, Aya Rbah, 17, and Kouakou all went missing from the Island of Montreal since January. Rousseau and Descoteaux were found safe after police publicized their disappearance.

We can also add Tia Blanchette, Kelly Martin-Nolet, and Athena Gervais in Laval. (Gervais was later found dead in a case that sparked a discussion about alcoholic energy drinks.) Or Kody Grenier-Atkinson in Longueuil.

And those are just the minors who go missing. Plenty of adults disappear as well.

If we were getting Amber Alerts interrupting our lives every two weeks, there would be a lot of people trying to find ways to disable them. (In March 2016, when the OPP sent out an Amber Alert that was distributed by TV providers, many people called in to complain.)

Thankfully wireless alerts (except for test ones) are designed only for imminent dangers to life or property, so the incidence of non-emergency alerts should be low.

But what if there’s an actual emergency and the system fails to deliver important information?

We haven’t had too many emergencies risking our lives lately (and we’re all grateful for that), but the recent Amber Alert provided some insight into implementation issues in the system. For example, the text of the alert pointed people to a Quebec public security website designed specifically for alerts, which is a good idea. Except that website didn’t have the alert listed. When the alert was finally posted about a half hour later, it didn’t include a photo.

The biggest flaw in our public alerting system remains its reliance on humans to operate it. There are so many different platforms of communication involved, so many jurisdictions, so many types of alerts that it’s difficult to automate and manage. And the emergency nature of such alerts means that non-test messages are often sent out in an inconsistent, improvised manner based more on the preferences of whatever person happens to be on duty than strict procedures laid out by the authorities.

We need to fix these issues before the next real emergency. Because lives could almost certainly depend on it.

I turned on some TVs and radios and kept my cellphones handy to see how the emergency alert went out.

On radio, it was a success. Simultaneously around 9:55am, programming on Montreal’s major radio stations cut out to broadcast the alert tone and message. It was very short and quickly cut back to regular programming.

(The website it points to, ontario.ca/alertready, returns a 504 error as I write this, probably because of all the traffic. Note that the text-to-speech software gives a confusing pronunciation of this address which might lead people to type in ontario.com instead.)

On television, mixed results. Normally my set-top boxes would automatically switch to an emergency alert channel, but this didn’t happen. (Possibly because I was using both tuners to record TV channels, but it would be disturbing if doing that prevented an emergency alert from getting out.) There was no alert broadcast on Radio-Canada. CTV, Global and City put out alerts, but still have some bugs to work out: 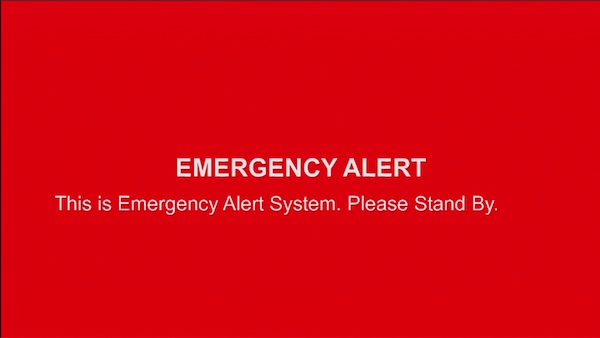 This was the alert broadcast on Global. The audio version contained the full message, but the visual alert contained just what you see here, with the second line scrolling right to left. Notice the lack of the word “test” here. People who for whatever reason could not hear the audio feed might have been left with the impression that this was an actual emergency, and gotten concerned when “Please Stand By” disappeared to be replaced by regular programming and no further alerts. (The closed captioning was blank for this alert as well, in case you were wondering.) 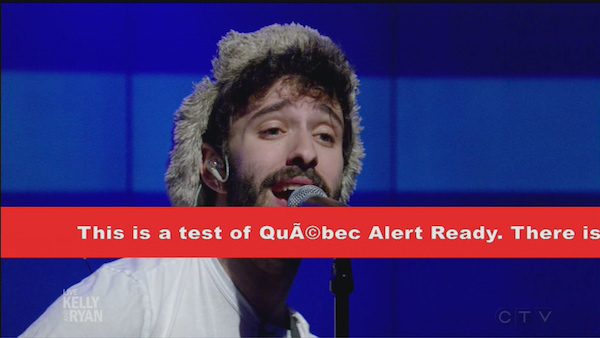 CTV’s alert was by the book in visual and audio, except for this Unicode encoding error on the word “Québec” 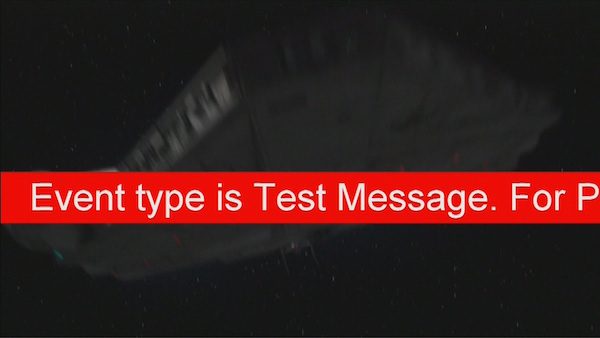 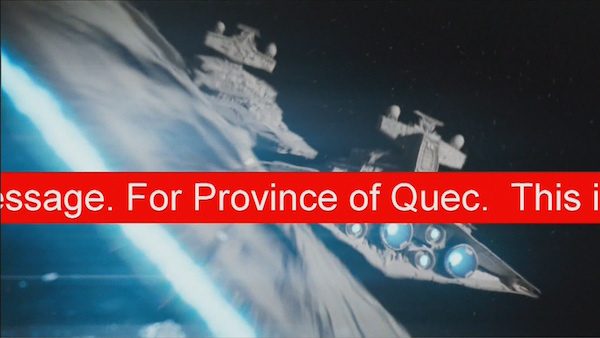 City’s broadcast also needs some debugging. Pretty sure “Event type is Test Message” was not meant for broadcast like that.

During the 1:55pm Ontario test on CJOH (CTV Ottawa), the message came through fine, but while the audio message took 30 seconds to deliver (including tone), the on-screen text message took a full minute to scroll through. During an actual emergency, that’s a long time to wait to get important information.

But for the entire point of this test, the first one done on cellphones, it was a complete failure. No alerts anywhere. Not a single person in Quebec received the alert. According to Alert Ready, which administers the alerts, it was a coding error:

On the plus side, this is why we do the tests, right? 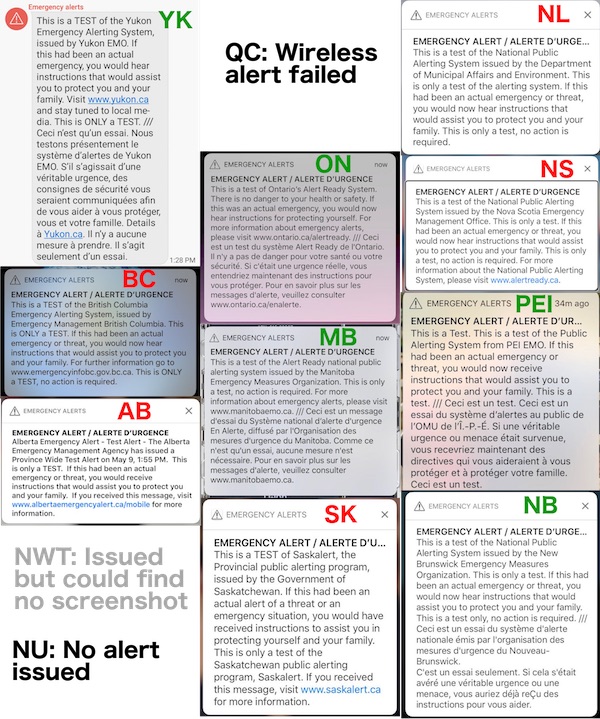 UPDATE: Tests in the nine other provinces and two of three territories (Nunavut did not participate) seem to have been successful, in that at least some phones got the alert message. It will be difficult to diagnose how many people got the message since the protocol to push them to phones is a one-way communication.