There’s not much clearer evidence of the declining industry of over-the-air television than the lack of demand for new TV stations in the country. With some exceptions (ICI in Montreal, for example), there haven’t been applications for new over-the-air stations in about 20 years. Instead, major networks like CBC, TVO and CTV have been shutting down transmitters en masse to save money.

So it’s a bit surprising that someone has submitted an application for a new transmitter, in one of the most remote places in the country: the Magdalen Islands (Îles-de-la-Madeleine), the archipelago in the Gulf of St. Lawrence that belongs to Quebec but is actually closer to all four Atlantic provinces than it is to the Quebec mainland.

The application comes from CHAU, the TVA affiliate in Carleton on the Gaspé peninsula. It’s owned by Télé Inter-Rives, which also operates affiliates of the three major French-language networks (Radio-Canada, TVA and V) in Rivière-du-Loup. In addition to its main transmitter in Carleton, CHAU operates 11 digital retransmitters in the Gaspé peninsula and northern New Brunswick. This would be the 12th transmitter, CHAU-DT-12.

(CHAU, like other independent broadcasters, made the investment to convert their over-the-air transmitters to digital even though they were not required to do so by the government’s digital transition plan because they served small communities.) 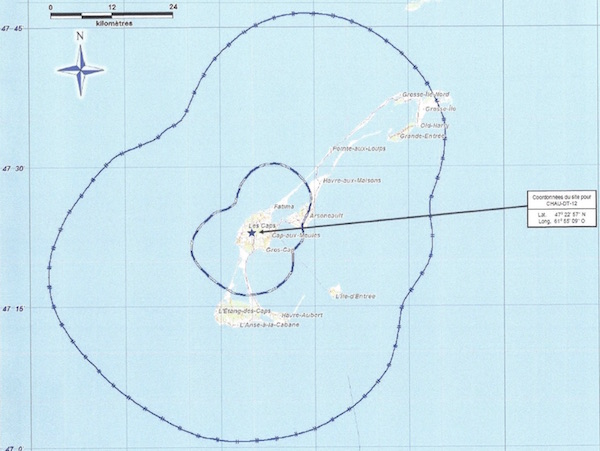 CHAU-DT-12 would be a 100-watt station, with a transmitter on Channel 12 in Cap-aux-Meules on the local transmission tower operated by GAD E?lectronique. CHAU puts the cost of the new transmission facility at $37,572. That’s about $3 for each of the region’s 12,000 or so residents.

Because it’s a retransmitter, CHAU-DT-12 wouldn’t be a local station for the islands, but CHAU says it wants to provide local programming, working with independent producers on the islands and doing reporting using technologies like Skype and FaceTime. CHAU says in its application that the residents of the islands have a lot in common with those of the Gaspé peninsula and Acadian communities in New Brunswick, including an interest in fishing.

It promises to devote at least 20 minutes a week to local news relevant to the islands.

“In today’s difficult environment for over-the-air television in Canada, the project to extend CHAU’s signal to the Îles-de-la-Madeleine represents an investment that is unexpected but achievable thanks to technical possibilities that reduce installation and operational costs,” the application reads.

The CRTC is accepting comments about CHAU’s application until July 5. Comments can be filed here. Note that all information submitted, including contact information, becomes part of the public record.