If you’ve been watching TVA or LCN (Oct. 4, Oct. 6, Oct. 13, Oct. 14, Oct. 15) or reading the Journal de Montréal (Oct. 4, Oct. 5, Oct. 6, Oct. 10, Oct. 14, Oct. 15, plus this and this) you’ve been bombarded with news about QUB Radio, Quebecor’s new online radio station. It launched on Monday, providing live talk programming from 6am to 5pm on weekdays and filling the rest of the schedule with repeats, podcasts and rebroadcasts of TVA/LCN news programming.

On one hand, this kind of major effort from a large media company could be what pushes mainstream audiences into online radio. On the other hand, the QUB platform is missing basic features that make it unnecessarily frustrating to consume. 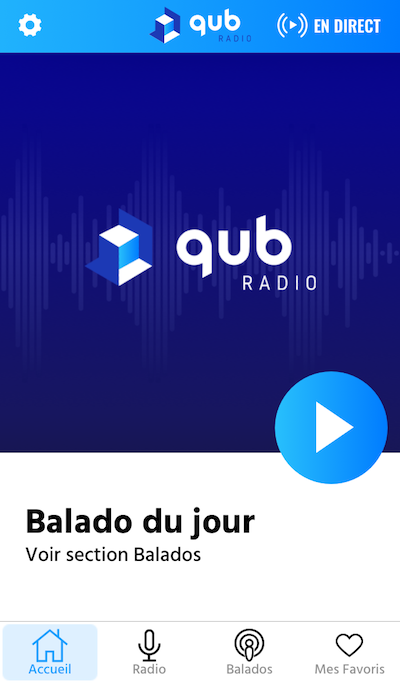 A walled garden or just not ready for launch?

The radio stream and podcasts are accessible through the website qub.radio as well as through a mobile app available for Android and iOS. QUB’s website also says it should be available through TuneIn and other similar websites and apps, but it’s not. Neither TuneIn, nor RadioPlayer (used by most other radio stations that aren’t Bell Media) nor iHeartRadio (Bell Media) have QUB in their listings as I write this the day after launch.

Even the podcasts aren’t widely available through other means yet. The website promises all their podcasts will be available on iOS podcasts, Google Podcasts, iTunes Podcasts, Stitcher, TuneIn, Overcast and PocketCasts. But listings are incomplete on those services. Some don’t have any QUB podcasts, others have only Benoît Dutrizac’s morning show and some pre-recorded podcasts, others have a larger selection. It wouldn’t be such a big issue if QUB’s website simply had links to podcast RSS feeds, but it doesn’t.

Even within the app, a very important feature is missing: the ability to download a podcast.

That’s insane. The entire point of a podcast is to download it and listen to it later, often when you’re away from home and don’t have wifi. But with the QUB app, if you’re not connected to the internet, you can’t listen to podcasts.

It doesn’t look like this is by design. If they wanted a walled garden, the podcasts wouldn’t be available at all outside the app. Rather, it seems as though neither the app nor the podcasts were properly prepared ahead of time. The result is a bad first impression, which sucks because first impressions are everything when you’re trying to sell someone on changing their habits and trying something new. People will look for these podcasts using their podcast app, won’t find them, and will move on to other things. 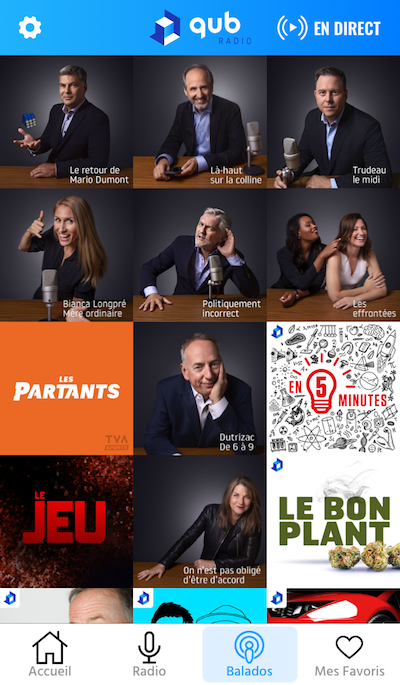 Podcasts, but no individual segments

One good thing about the platform is that its shows are available as podcasts. Other broadcasters refuse to make full episodes of their radio shows available for download as podcasts *cough*Bell Media*cough*, but with QUB each show has a podcast that offers all of the show’s editorial content. (The exception seems to be Dutrizac’s show, the only one that’s more than an hour — the podcast offers about an hour of best-of moments from the three-hour show.)

This is great, but there’s also a downside. While other radio stations offer the ability to listen to individual segments, this isn’t available on QUB. Instead, you have to play the full show and search around to find the segment you want. Another missing feature that should have been ready for launch and has no strategic reason for being absent.

Each show should have its own page on QUB’s website, and that page should have clips of interviews and other segments from the show. 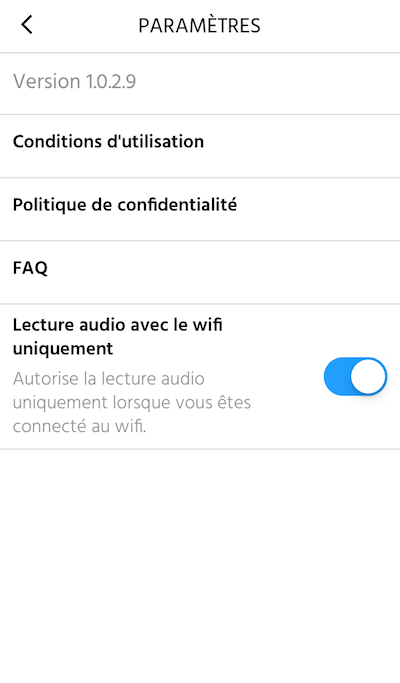 QUB app preferences page has only one setting.

And the app should have more than one setting in its preferences. (Though the ability to block non-wifi downloads is definitely appreciated.)

Programming: lots of monologues, no traffic

I won’t get into analyzing the content of what’s discussed on QUB radio too much, but rather its form. The topics are about what you’d expect if you watch LCN or read the Journal de Montréal: lots of political talk and opinion about subjects in the news.

With the exception of Benoît Dutrizac’s three-hour morning show, each show is an hour long. The shows with one host generally begin with a monologue that can last up to 15 minutes, followed by segments where a guest is invited to be interviewed or discuss the news. Shows with multiple hosts (whether they’re in the name of the show or not) will have more of a back-and-forth discussion to open their shows.

The biggest difference between QUB and commercial radio is that’s not found in the former. There are no newscasts, no weather reports and no traffic reports (except where it rebroadcasts TVA/LCN). This is being sold as a positive, giving more time to talking about the issues. It also allows QUB to be geographically universal, instead of needing local breaks or boring people in Saguenay with news about traffic on the Champlain Bridge. The mentality is that people who want weather and traffic can get that information through apps, which is a good point.

A side-effect of this is that the shows have much less of a zoo atmosphere than commercial radio does, when you have a news announcer, a traffic announcer and columnists coming in and out of the studio at all times, especially during the morning and afternoon rush hours.

Commercial breaks are about the same as you’d find in radio, about 3-4 minutes each, separating the segments of a show. Right now the ads are almost all for Quebecor services (TVA, Journal de Montréal, Videotron), but that should change if QUB builds an audience.

In addition to the live shows, QUB has a growing selection of podcasts. They include some new podcasts making use of Quebecor resources (Les Partants from TVA Sports, En 5 Minutes from the Journal de Montréal, Le Jeu from TVA) and other podcasts like one on country music from Guylaine Tanguay and podcasts on cars, technology, gaming, humour, crime and, of course, pot. These all sound interesting, but need to be accessible outside the app to be successful. 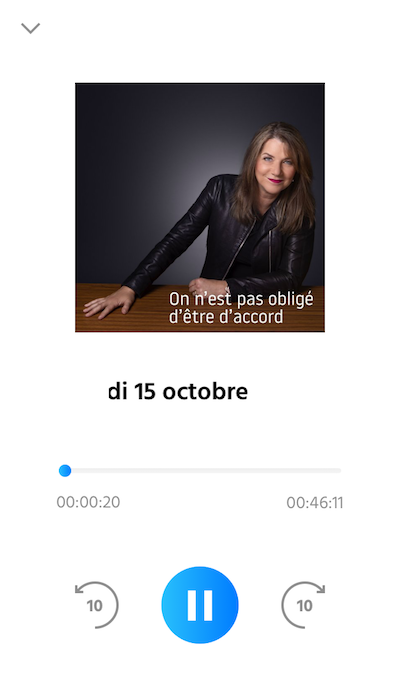 The QUB app’s built-in podcast player allows skipping forward and backward by 10 seconds, but not much else.

Why not just buy a radio station?

Quebecor does not own any radio stations. So why not just buy one, or even a network, and launch QUB on there? This question was put to Quebecor boss Pierre Karl Péladeau by Dutrizac on his debut show. And as Péladeau explained, they tried that once.

In 2002, after the breakup of Telemedia caused ownership chaos in the Canadian radio marketplace, a deal was reached whereby a 60/40 partnership of Quebecor and RNC Media would buy nine radio stations in Quebec including CKAC in Montreal and CHRC and CFOM-FM in Quebec City. In 2003, the CRTC denied that acquisition in part because of the concentration of media ownership in the hands of Quebecor, particularly in Montreal and Quebec City, where Quebecor would have a television station (TVA), a radio station, a daily newspaper (the Journal de Montréal/Québec), a music store (Archambault) and a cable TV provider (Videotron).

In 2008, the CRTC set a policy whereby it would not accept that a daily newspaper, a local radio station and a local TV station in any market could be owned by the same company. Since then, Quebecor has stayed out of the radio business.

We’ve been down this road before

The big question is whether QUB Radio will work. Assuming it deals with its technical issues, it could provide a decent alternative to Cogeco’s talk stations or CHOI Radio X.

But past experience with online radio hasn’t been very encouraging. In 2013, the Journal de Montréal tried launching a daily noon-hour online radio show with Gilles Proulx and Sophie Durocher. It didn’t last long.

Jeff Fillion, the controversial Quebec City host, tried doing his show online after falling out with Radio X, but in 2014 he got hired by Bell Media and two years later he was back at CHOI.

Could this be different? Absolutely. There’s more content here, and it’s getting a big marketing boost. But it needs a reason for people to tune in. And we’re still not quite at the point where online streaming is a reliable, easy and cheap thing to do in a moving vehicle.

Quebecor estimates that listening to QUB for an hour a day results in about 1GB of data over a month, which sounds about right. Some wireless plans are big enough that this isn’t an issue, but others aren’t. Combine that with an incomplete wireless coverage area and the awkwardness for some people of playing audio from their phone through a car’s sound system, and many will decide FM radio is a better fit for them.

Those issues will resolve themselves over time, though. Cellular coverage will improve, data will become cheaper, and connecting phones to car audio systems will be easier (and people will be more used to using Bluetooth).

So QUB can be the first real mainstream live internet radio station to take off in Quebec. But it needs to be as accessible as possible. It needs to make its content accessible through as many applications and devices as possible, to make it as easy as possible for people to access that content.

So far, it’s far from that. Very far.

Listen to the first moments of QUB Radio as it launched at 6am Monday here:

5 thoughts on “Quebecor’s QUB Radio could change the business, but it’s technically incomplete”