CityNews didn’t hide the fact that its local newscasts would be repetitive. In fact, they spun it as a design feature: few people will watch a full one-hour newscast, so it makes sense to make sure the top local stories are repeated so people get them whether they tune in at 6pm or 6:30pm.

But it also means the news can be done on the cheap. With only two full-time reporters to start, plus a part-time reporter, BT’s news reporter and a guest contributor, they just don’t have enough staff to fill 14 one-hour newscasts a week.

To get an idea of what that means quantitatively, I recorded the first 14 episodes of CityNews Montreal’s newscast, the week of Sept. 3-9, at 6pm and 11pm, and timed its segments (705 segments total, with 13 attributes of each marked down). Here’s what stuck out to me:

Lots of promos: There’s no big musical number to start the newscast. Instead, just a quick CityNews graphic that swipes away to reveal a local reporter teasing their story coming up. A few seconds later, another graphic swipe, another reporter doing the same. The newscast is a series of stories and promos one after the other, and there are a lot of promos. In an average newscast, three minutes and 27 seconds (5.8%) of airtime is spent on promos for stuff coming up later or on the next day’s Breakfast Television. There are about 15 of these during an average hour, about 10-25 seconds each. 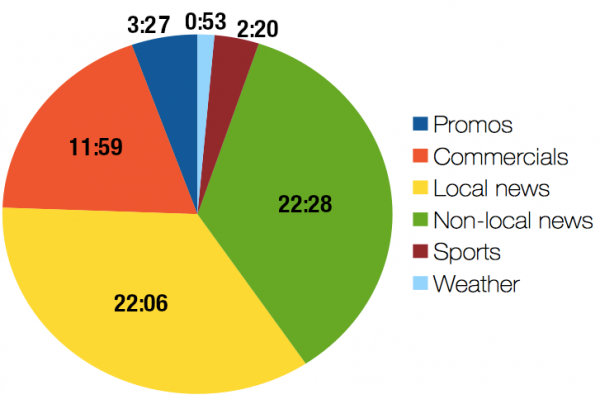 Lots of repeats: Taking out commercials, promos, weather and sports, you have about an even mix between local and non-local news. The total over the first week was just over five hours, below the CRTC minimum of six (Breakfast Television would make up the rest of that quota).

But if you exclude when stories are repeated (both within the same newscast and subsequent newscasts), that five hours drops to an hour and a half (6:22 per newscast). And here I’m not excluding content about 25 minutes of content (1:45 per newscast) that is repackaged from Breakfast Television (Joanne Vrakas or Derick Fage taking an excerpt from a BT interview or panel discussion and sandwiching it with a brief intro and signoff, or Elias Makos redoing a BT news-from-the-internet segment for the evening newscast).

Generally, local news stories (including briefs) air twice per newscast. Occasionally some will air a third time. The packaged stories are simply replayed again, not repackaged using a slightly different angle the way CBC used to do it during its 90-minute newscast days.

Taking it one step further, the weekend newscast repeats stories from earlier in the week. 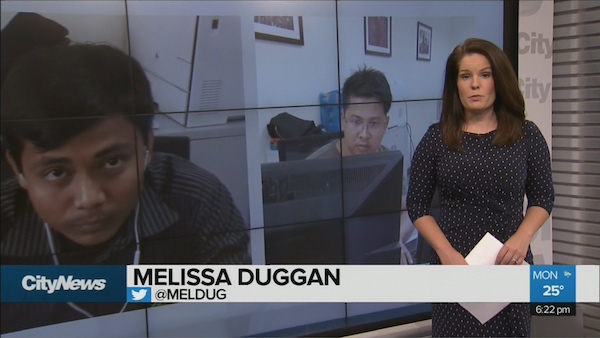 The other 14 minutes of non-local news is basically local stories coming out of City’s five other local TV stations producing local news (Toronto, Winnipeg, Edmonton, Calgary and Vancouver). Some of these stories have a clear national interest and are even nationalized, making them relevant across the country. Others have at least theoretical national interest but are clearly done for the local news and could have been nationalized better. And some have little interest outside their home markets (a story about a knife attack in Winnipeg made the Montreal newscast, for example).

Other networks do this too, of course, to varying degrees. Even CTV Montreal will occasionally run local stories from other markets where it (a) desperately needs content and/or (b) thinks such a story has a particular relevance to Montrealers. But City goes farther than its competitors, making this practice essentially standard. Taken to its extreme, all of Citytv’s local newscast could be the exact same show, but with different parts of it counting as local news for that market.

Politics news on the cheap: CTV, CBC and Global all have reporters and camera operators in Quebec City. CityNews does not. And during the Quebec election campaign, it didn’t have any reporters or even cameras on the party buses. So election news of the day often consisted of brief anchor voice-overs set to still pictures. The lack of resources was very apparent here.

Minimal weather: Weather is presented by BT weather presenter Catherine Verdon-Diamond in a prerecorded segment during the week, and by one of the reporters on the weekend. It’s short, representing an average of less than a minute per newscast, and gives just the basics. Unlike some newscasts that make weather a central feature, CityNews believes its audience is more likely to get weather from an app and so quickly moves on to other things.

Very little new at 11: If you watch the 6pm newscast on a given day, there’s not much point in tuning in at 11. I counted less than a dozen local stories, including briefs, that were new at 11. And two of them were Sportsnet game recaps. 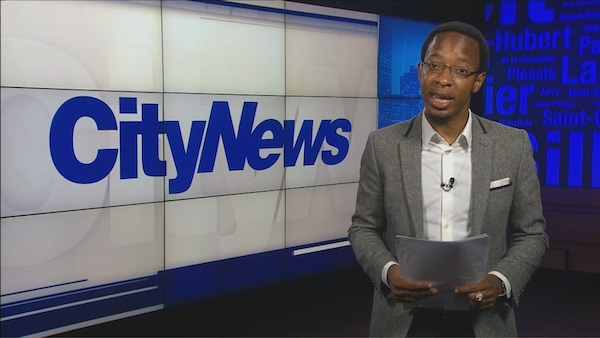 CityNews Montreal’s Akil Alleyne in the studio. The newscast is officially anchorless, but generally has a reporter in studio to read briefs.

Overall: CityNews says these newscasts are evidence of its commitment to local news and local communities. And in the sense that they’re better than nothing, I guess that’s true. But when the company’s executives say they outsourced technical jobs so they could put more resources into on-the-ground reporting, I can only ask where those resources are.

Repeating local news, having a lot of streeters, including local news from other markets, having lots of promos, getting Sportsnet to produce local sports news, all of these things can be sold as a strategic decision made for a good reason. But put everything together and it looks like every decision in the making of this newscast, and its peers in other cities, is done for the primary purpose of saving money.

This isn’t to knock the journalism being produced by the not-even-a-handful of local reporters here. They’re carrying big loads on their shoulders. (There were a few standout moments as well, such as being the only network to produce a post-debate analysis show after the English leaders’ debate.)

I’m also purposefully not focusing on the various technical errors that are common when a new show gets off the ground (I included one in the above video just because I thought it was funny.)

But this operation is vastly understaffed. And until that changes, it will be hard to convince me that Citytv’s announced strategy of presenting something different, more youthful and fast-paced is anything but polishing the turd of a show designed to meet CRTC minimum requirements as cheaply as is humanly possible.

CityNews airs every day at 6pm and 11pm on Citytv Montreal and montreal.citynews.ca.